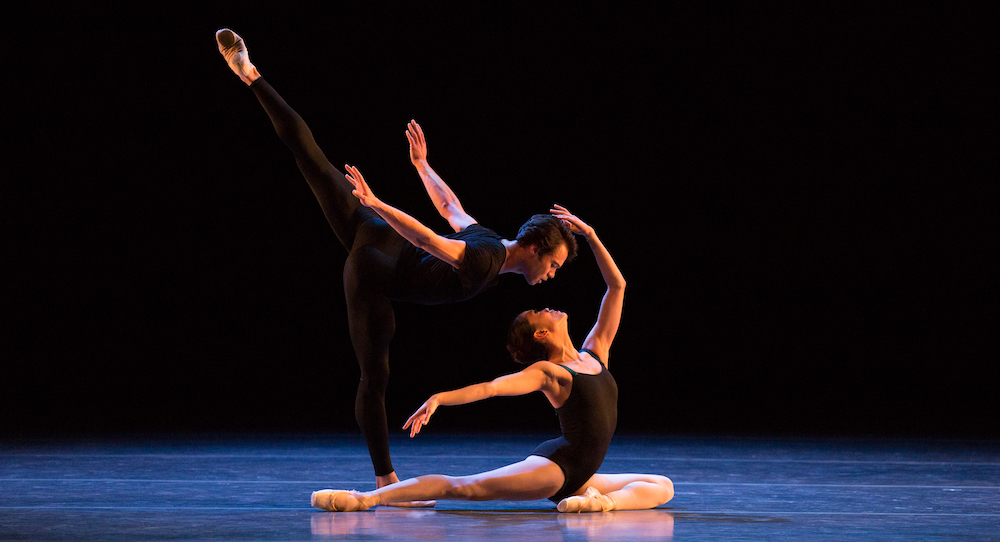 Dance doesn’t exist in a vacuum, evidently enough; what came before is either a foundation or something to diverge from. A choreographer’s voice evolves over time, yet certain interests and inclinations may remain. In both a particular choreographer’s body of work and in the evolution of dance more broadly, it can be interesting and informative to view older works and put them in conversation with newer works.

This COVID age has many companies doing that out of practicality and necessity, pairing new works filmed in ways that are safe for this time and archival works in virtual programs. Celebrating Jorma Elo, within Boston Ballet’s “BB@yourhome” program, did just that — honoring the 15-year Boston Ballet Resident Choreographer through works safely filmed in-studio and older works performed on the grand Boston Opera House stage. Both kinds of works made clear the uniqueness of Elo’s vision, voice and resulting body of work through the years.

Part I, featuring Plan 2 B, opened with one dancer soon joined by another. They moved with a freneticism, yet one that was grounded in assurance. The overall aesthetic was uncomplicated: costumes in basic cuts and solid colors, lighting reminiscing midnight and a glass panel seemingly lit from behind with a yellow-orange hue (costuming and lighting design also by Elo). Masks signaled that the work was created in COVID times, as an opening to the program had also clarified.

The dancers seamlessly toggled between movement that was gestural and unconventional, and that which was more technical and traditional; Ji Young Chae grounded in a deep lunge and then swiftly circled her arms, like propeller blades and then smoothly rose to a pirouette turn. That aligned with the quality of the instrumental music, with a quick and fiery boldness but also a classical sophistication.

The pair of dancers did partner, yet in ways that didn’t have their faces close. When not in a lift, they swerved in and out of each other’s negative space in a beautifully curvilinear fashion. On a metaphorical level, this lack of physical space can hit home to viewers nowadays. On a practical level, those choreographic choices were a way for the dancers to share energy in close proximity with less risk of harm to either of them.

Those swerving angles remained an evident part of the movement as more dancers entered; the group grew from two to one (with a quick and memorable solo from John Lam) to six. How dancers executed those curvilinear shapes from formations — such as a shallow diagonal wherein dancers posed for a moment, low in space and with arms held to the side in a wing-like shape — was another layer of visual and energetic interest here. Also intriguing were the tempo and tonal changes in the music, and how movement played off them — sometimes shifting accordingly, sometimes progressing in tension with them.

The energy peaked toward the end, the dancers briskly moving through more curvilinear shapes and finding quick interactions with one another through the space. The music came to a staccato end, and the dancers hit a final pose that seemed to convey continuance, of moving forward from there — two dancers facing the side in a lunged position and behind them, dancers standing with their feet together and looking straight forward. The lights faded downward. I’d be curious to see what effect might have come from the different choice of dancers continuing to move as the lights came down. As it was, the ending was satisfying.

Part II, Bach Cello Suites, also cleverly used negative space. The dancers (Paulo Arrais and Lia Cirio) would just short of embrace — arms held out in a hug shape and brushed away, gazes to the side with arms remaining extended sideways. Whether or not a commentary on the lack of physical contact through this time, it was compelling movement vocabulary in its own right.

Along with the music’s yearning tone, it built a feeling of sadness and loss that resonated deeply for me as a viewer. Also resonating for me was how I could see Arrais and Cirio’s quickened, deepened breathing through their masks — sucking in and expanding out in steady rhythm. It hit home for me how dancers like them are facing immense challenges right now, physical and mental, and fully rising to those challenges.

Part III, Story of a Memory, spoke to some of those same themes, of loss and yearning, in a theatrically and technologically adept way. Interspersed between their dancing, mostly apart in space, were frames of the dancers laughing and smiling. They sat up against different sides on an enormous black block, speaking poetic lines — somewhat ambiguous but seemingly about each other, as they also sat and spoke in each other’s direction (how one might try to speak to someone on the other side of a thin wall).

Part IV included excerpts from various Elo works through the years. Each excerpt gave a taste of certain notable Elo works — all unique in aesthetic and concept but with the common thread of a signature Elo movement style: dynamic, bursting with energy and reflective of various movement influences (both technical and pedestrian) resting upon a classical base.

C. to C. (Close to Chuck) Reborn had an edgy, mysteriously nightmarish vibe. Sharp(er) Side of Dark brought something pared-down and elegant, almost Balanchinian in aesthetic but very Elo in movement quality. The Elo Experience brought a mysterious elegance. Light and dark were in tension in different ways throughout the work. Theatricality and large formations built an energy that supported that feeling.

Creatures of Egmont was a bit lighter and brighter, blues and purples supporting movement that was a bit less staccato than that of many other Elo pieces. Yet, that signature dynamism filled the air. From costuming to formations to the dancers’ stage presence, Fifth Symphony of Jean Sibelius had a look and feel of a pastoral ballet revamped for the 21st century.

It was also heartwarming to see a bit of Boston Ballet history, such as through performances from former company members James Whiteside (now at American Ballet Theater) and Kathleen Breen Combes (now director of Festival Ballet Providence). Prior to these excerpts, a few lovely photo stills also represented Carmen, presented just last year (in early 2020) — a stark reminder of how things were just before COVID, and therein how much they’ve changed.

This program’s inclusion of both newer, COVID-safe and older works presented before COVID felt bittersweet; it was heartening to see works still being created and filmed through this time, while older works were a reminder of what was possible before — that which we might have sometimes taken for granted. Both types of works, however, made clear the unique creative voice of Elo and the seminal artistry of Boston Ballet now and in the past. The world is in constant, wholly unpredictable flux, but creativity and artistry endure.