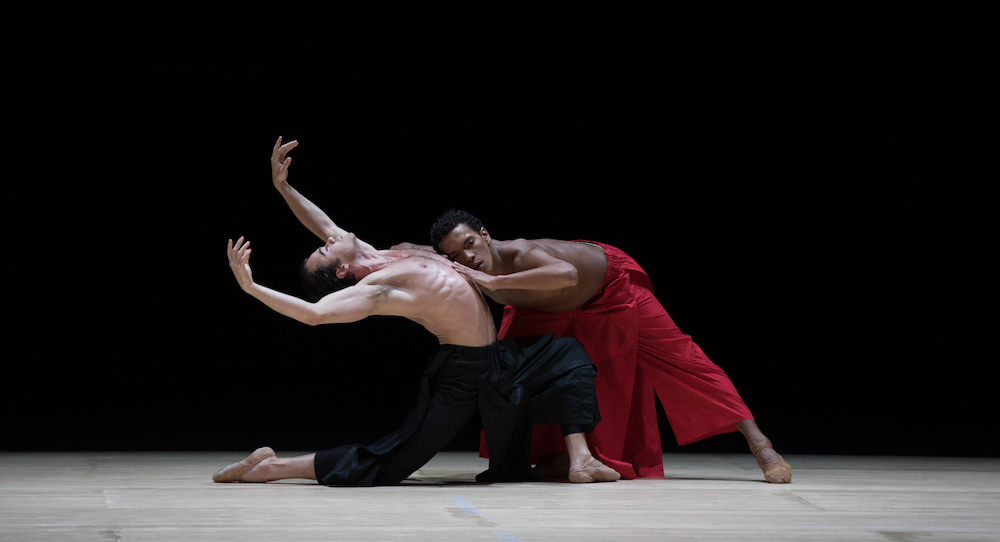 The tension between the will of the individual and that of the group is as old as time. In classical dance, there’s the corps de ballet and soloists. Traditionally speaking, corps members must together compose a united whole while soloists are tasked with embodying full and memorable characters, archetypes or ideas. Some works of dance art can utilize this structure to depict united groups and those who diverge from them, those “mavericks” who dare to color outside of the lines. It seems to have been shown possible even in ballet crafted in a more contemporary vein. 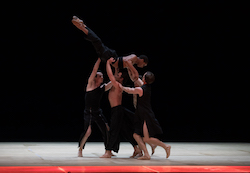 Boston Ballet demonstrated such an approach, to great success, in Obsidian Tear – including the title work from Wayne McGregor and the world premiere of Fifth Symphony of Jean Sibelius from Resident Choreographer Jorma Elo. The general focus, delivered with specificity yet multi-faceted nuance open to interpretation, seems quite apropos in 2017; various socio-political forces lead us to consider how we balance serving the life of the individual and the thriving of the wider collective.

The Oxford Dictionary defines “obsidian” as “a hard, dark, glasslike volcanic rock formed by the rapid solidification of lava without crystallization” – a curious word indeed for the title of a ballet. That combined with the grand and dramatic preceding overture (“Finlandia” by Jean Sibelius, led by Guest Conductor Daniel Stewart), and we audience members didn’t know what to expect. Yet we knew we were in for a ride. The first dancers were in black, with one in red – a color that stuck out as vibrant and unique. Other dancers joined, but all in black and none with this eye-catching red (costumes assembled by Fashion Coordinator Katie Shillingford). The sole red had to signify something. Something big had to be coming.

McGregor’s movement in this piece was like maple syrup – oozing in a sustained way but with a somehow sharp and striking sweetness. A mesh of the classical and more joint-initiated contemporary perhaps built this quality. The music interwove itself through that movement, with a continuously meandering quality. Conversely, as the dancers moved, different groupings seemed to embody different harmonic parts in the music – high and lower, sharp and more adagio.

The movement was also rather shape-driven – sometimes those more complex and fuzzy to the eye, at other times more geometric and definitive. It became a give-and-take, a balance, between the defined and the somewhat undefinable. One truly memorable shape, visually astounding but also seemingly speaking to the connection between the dancers, was arms forming a loop (dancers holding wrists) and the loop raised to upstage. They released this to re-loop in a different variation.

Later, the same two walked off stage together – two parts of a whole, it appeared. Yet the dancer in red was never engaged in these kind of connections. Moreover, more dancers joined and came to lead him to a ledge – one of black, sharp, thick and strong rock. Obsidian. A tension of battle was rising. One dancer extended his arm as if to gesture “forth, men!” Movement then grew faster, more geometric and more angular – elbow-driven, with gestures in different planes and directions. It all felt quite mechanical. The dancer in red was finally led to the edge of the ledge. Tension hit a peak as he had to stand there as powerful, commanding dancing (in a duet and solo) played out below him. There seemed to be no escape.

In an oddly sinister way, one dancer walked slowly across the stage. It reminisced the slow march toward mortality. The end seemingly so close for this outsider in red, it was tangible enough to be reflected in physical form. The dancer on the ledge tried to escape but was then pushed off into an unknown abyss. Then another dancer struggled for life – a representation of the one who fell, or one of empathic connection between them as both living, feeling people?

Above this dancer commenced a duet of heavy and grounded movement, of tense yet smoothly executed weight sharing. This section, as well as much else about the piece (such as some in an all-male cast wearing rather feminine costumes) unflinchingly broke through gendered boundaries; all-male partnering included shapes and movement historically danced by women. It all didn’t seem to call attention to itself, as it didn’t seem to be the main focus of the work. Gender just didn’t seem to have to matter.

What seemed to be more the point in question was the treatment of this one dancer in red – ostracized, vilified and finally pushed to his demise. Also significant was how a main leader of this treatment jumped off the ledge himself at the end – lights and music suddenly cutting out, and the curtain quickly dropping, to add to the shock of observing that completely unexpected action. One takeaway – sometimes we are pushed, and sometimes we jump. We are done unto, and we do upon ourselves. Another is that those who bully and ostracize the vulnerable ultimately also hurt themselves in the end. Whatever the case may be, or even with no particular moral message to derive, it was unique and striking art to experience.

Jorma Elo’s Fifth Symphony of Jean Sibeluis was noticeably more traditional but had its own kind of contemporary bent. It truly began with a bang, at the risk of cliché – but one that was in no way cliché. From the start, formations melted into each other in very striking, innovative ways. It was a different kind of continuous motion than was seen in McGregor’s piece; rather than individual groupings continuously moving in specific phrasework, the overall stage picture was constantly morphing, shifting and evolving. With clever phrase-work, various pairs of male and female dancers, in green and maroon (costume design by Yumiko Takeshima) moved within these formations. This phrasework was punctuated by a few particular movement motifs and shapes, including “V” arms, “scissoring” legs with dancers lifted (to almost create a feeling of flying).

It all felt largely classical, yet lilting extensions and shaping in partnering felt compellingly contemporary. Something significant felt quite divergent from classical plotless ballet pieces, however. One dancer in blue (Ashley Ellis), who didn’t have a partner, danced her own unique movement. At one point, for instance, Ellis sat, spun and pedaled her feet as if riding a bicycle. Did her solitude prevent her from flying, keeping her grounded, while those with the support of others could fly?

The unity of the group as a whole wasn’t as settled in the beginning; dancers in clear lines moved limbs every which way – an organized chaos. This all morphed into clearer unison – canon, groupings and the like. Ellis’ character didn’t seem willing, or able, to self-define within that united identity, however. In one beautiful section, for instance, dancers leapt in smoothly intersecting lines. The dancer in blue took her own path, however. 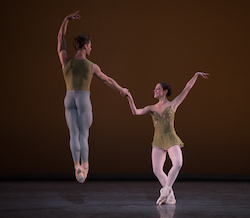 Ultimately, the group came to strike a wonderful tableau – yet the dancer in blue sat, peddling her legs. She never did come to truly join the group. Yet a smile was wide across her face. She seemed to be in solitude, but not loneliness. Therein, the work in conjunction with McGregor’s demonstrated a diversity of experience.

There is ostracization and attack of the outsider, most often borne out of fear – often that of change, of losing what one has had. There is also when the group and the outsider are content in their own identities and present experience. Our world (perhaps more now than in a long while) is presently facing these questions of how we balance the needs of the individual and group, of the welfare of the pack and that of outsiders – perhaps now more than it has in a long time.

Art, at its best, is a multi-paneled mirror to reflect reality as is – or how it could be. Dance, with access to the power of infinite possibilities of bodies in space – joined with those bodies’ minds and spirits – perhaps has a unique ability still among art forms. In Obsidian Tear, Boston Ballet tapped into this power with precision and grace.