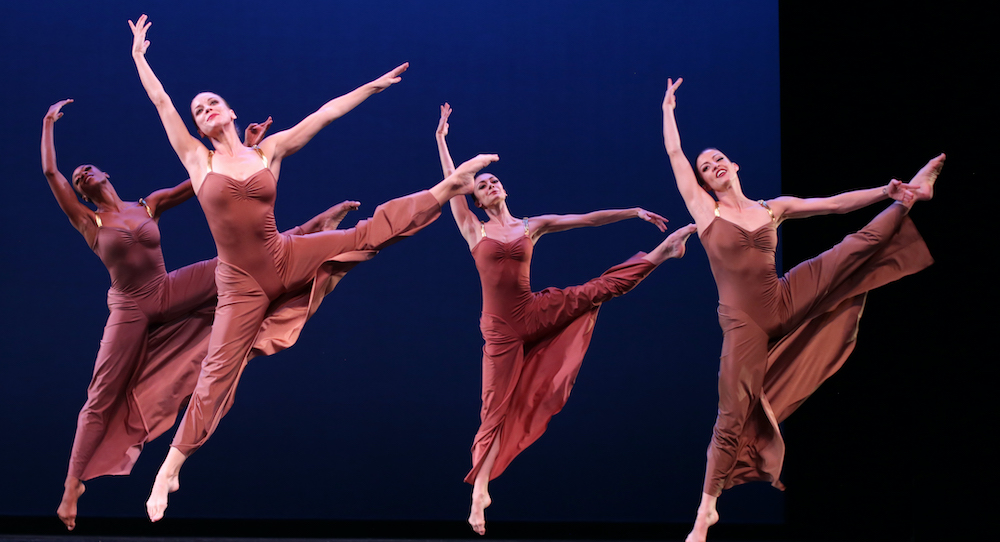 I sat in my seat at the Joyce Theater, my first time back in the lovely space since before COVID hit, eagerly waiting my first time seeing Martha Graham Dance Company live. Seeing the show with a good friend, combined with the pleasant weather (following days of not-so-pleasant weather and traveling in that unpleasantness nonetheless), had a light smile plastered on my face. The crowd clapped as Martha Graham Dance Company Artistic Director Janet Eilber emerged from behind the large stage curtain and welcomed the audience.

She underscored the exciting occasion of the company being back at the Joyce as we begin to get a handle on the long, hard winter of a global pandemic — one that’s been nothing short of devastating and simply exhausting, in and out of the arts. All of this, and the program to follow, had my heart feeling like spring might be on the way — yet a spring with the scars of winter and sincere responsibilities to recover in ways that leave us better off than we were last autumn.

Martha Graham’s Diversion of Angels (1948) kicked off the program, a piece equal parts delightful and thought-provoking. In her pre-show address, Eilber explained how some see the three leading women in the work as three different women, while others interpret them as depictions of the same woman at different stages of life. Graham, however, was always clear that — at its essence — the piece is “about love,” Eilber affirmed.

Romance was certainly a key theme in the piece, yet looming larger was how love can take many different forms throughout our life, and how those forms light up our spirits in their own ways. The first leading lady we met was a dignified and somewhat stoic woman wearing white (Natasha M. Diamond-Walker). She shaped and carved space, infusing it with distinguised calm.

Then we met a woman wearing vibrant yellow (Marzia Memoli), and her long hair flowing freely. Embodying what Eilber had described as ‘’mercurial, adolescent love,” she moved frenetically, continuously, dynamically; nimble footwork and impressively fast leaps wowed my eyes and invigorated my spirit. I saw in her an assuredness masking uncertainty, one that you know well if you know teenagers.

A woman in red entered next (So Young An), her movement curvilinear and her presence sensual. As a motif, she formed and held a side tilt — her left leg held high and steady for a few breaths. With that, I thought of cycles in life: repeated outcomes from habitual actions, being caught in the same pattern of actions or behaviors, or — on the brighter side — getting into a “groove” that works.

Accompanying all of these women was a corp of dancers, some of them men acting as trusty partners to the three leading women. Their polished execution of Graham’s vocabulary — turning with a flexed foot, sliding into a horizontal tilt with ease — reminded me of its unique power, how classical we see it today yet how unique it remains. Classics become classics for a reason.

Also meaningful to me was how the three main women weaved in and out at different points, exiting and then reentering before too long. Combined with the woman in white beginning the work, this structural choice had me reflecting on having memories — even flashbacks at points — of our past. That can feel so real, us seeing ourselves in that time like it’s a movie.

Given that, the interpretation of these women as the same women at different points in life appealed to me. Yet, Graham’s own emphasis on love did seem to supersede any such specific interpretation. Whatever kind of love we find in life, it is love — and the body’s possibilities in movement can be a prescient vessel through which to depict where it takes us.

Immediate Tragedy, Graham’s 1937 solo illustrating the experiences of women affected by the Spanish Civil War, was nothing short of heart-wrenching. Xin Ying danced a representation of those women with honesty and sincere heart. Wearing black and red, frills further imbuing Spanish cultural touches, she danced in a low spotlight. The choice to depict this experience in a solo also felt meaningful, as hardship can leave us feeling particularly lonely; we all live through it in our own ways.

Ying moved back and forth across the span of the spotlight, grounding through her legs but her heart lifted to the sky. I thought of being pulled between various obligations, needs and desires. In times of war, that can be in tensions between responsibility to country and to safety of oneself and one’s loved ones.

Later in the piece, she crawled forward on her knees — the weight of those tensions, and simply the tragedies of war, perhaps overcome her. I was just about overcome watching this. Yet, to end the work, she rose and slowly walked toward the audience. Evincing the resiliency and adaptability of women, that which we have proven through the ages, she wouldn’t be kept down.

Closing Act I of the day’s program was Andrea Miller’s Scavengers — which premiered in this Fall Season and is a work now part of the company’s repertory, as Eilber explained in her pre-show address. The work was both visually exhilarating and a moving meditation on human nature and how we treat one another.

An overall sparse aesthetic — costumes pedestrian (by Oana Botez), lighting low (by Burke Brown) — established an air of mystery, leading to that visual exhilaration and meditative sense. The score added further scaffolding to both qualities (by Will Epstein) — with a haunting voice accompanying the beginning and end of the work, and various instruments entering and exiting in the interim.

Partnering characterized much of the movement vocabulary: reaching upward for support and finding it in the strength of another body, being lifted when rising one’s self might not be possible, finding stable grounding through another’s stability. If we “scavenge”, unabashedly grasping for support from others, do we do so from unmet needs?

That aside, evincing hope, the dancers often lifted their hearts to the sky; just maybe, grace from above could come. Serpentine and melty qualities in the movement bolstered that sense of hope by implying multifaceted possibilities.

Toward the end, a golden light rose, and movement had a new feeling of ease (while maintaining strength). Perhaps hope was at hand. Throughout, the dancers offered a sincere command of and comfort with Miller’s fresh movement vocabulary — impressively so, considering how much that style contrasts Graham’s very geometric technique.

I did notice that those reaching for support were women — and, along with the title of Scavengers, I wondered if the implication was that women were the ones “scavenging”. As an admitted feminist, this just slightly irritated me like a pebble in my shoe might. Thinking deeper, I came to be doubtful that such an implication was Miller’s intention — yet perhaps something to note as something one could see in the work (particularly if it was not Miller’s intention).

For their part, the ensemble performed Graham’s classic choreography with the attack, yet sense of humility that characterized the American settler spirit: work hard and leave the rest, what’s out of your control, up to God. The corps of four settler women skillfully executed delightful comedic timing.

Context — both past and present — struck me the most while taking in this work, however. In 1944, America had just faced the deepest and most protracted economic calamity in its history, and following that a world war. Both brought immense loss and despair. As the war was wrapping up and the economy was notably improving, perhaps the country could look into the future with the same hope and anticipation that settlers could feel looking out into new lands and the more forgiving, pleasant weather of spring and summer.

1944 was perhaps also a time to reflect deeply on who we are as a nation, and who we want to be. What better way to do that than to look to our roots, the time when the country grew to be what it is. Overcoming tragedy comes with the opportunity to rebuild and renew. In 2021, as we slowly emerge from a global pandemic that has shaken us to our core — as a nation and as a world — we can have that same anticipation and hope, yet also a call to reflect and responsibly restore.

If spring is truly on the horizon, we can enjoy the new sun on our shoulders but also remember that it’s time to get to work. Brava and gratitude to Martha Graham Dance Company for a program that was delightful in its own right, but beyond that offered this food for thought.