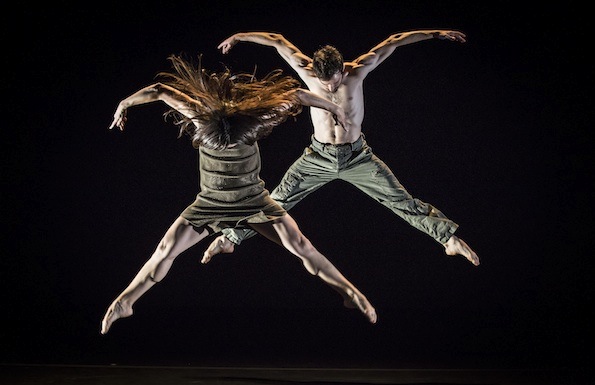 The award-winning Los Angeles-based repertory company BODYTRAFFIC is successfully putting the City of Angels on the map as a place that embraces and produces world-class contemporary dance. With just seven charming, persuasive dancers, this small troupe is turning heads with the level of contemporary international choreographers they are partnering with in a city long known for its commercial dance and entertainment scene.

Describing the company as “handsome and effervescent,” L.A.-based writer and dance reviewer Debra Levine went on to say that the company has excitingly brought “high-caliber dance” to L.A. in her take on the troupe’s October performances at Santa Monica’s Broad Stage. And it’s true – although many other thriving local dance troupes often present quality and site-specific dance, for a city with so many global connections, it seems only appropriate to create a contemporary company that mirrors its international and artistic ambition.

The six-year-old repertory company closed 2013 with more notches on its belt and more tricks up its sleeve too. After collaborating with numerous highly sought-after and renowned choreographers, BODYTRAFFIC also made major leaps in its national exposure, celebrating engagements at the Fall for Dance Festival at New York City Center and the beloved Jacob’s Pillow Dance Festival over the summer. The troupe even performed at ODC Theater in San Francisco and the Yes! Dance Invitational in Richmond, Virginia. 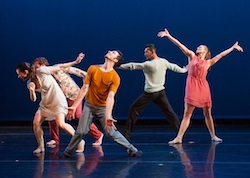 One reason why the company is clearly thriving is its gracious, humble and aspiring directors, Lillian Barbeito and Tina Finkelman Berkett. With grand vision honed in by warm, unpretentious demeanors and appreciative attitudes, they both reflect on the company’s first six years with hearts clearly brimming with gratefulness and graciousness. They share how they first met in ballet class in L.A., which is ironic considering that at the time both were contemporary dancers coming from different cities.

Lillian Barbeito recalls, “The first encounter I had with Tina was actually in a ballet class at Westside School of Ballet. I saw her dancing and thought she was really well-trained and stood out in comparison to a lot of other dancers in L.A., especially during that time. I basically hit on her in a dancer sort of way. I went over to her and said, ‘You’re kind of good’ and we chuckled about that.”

At the time, Tina Finkelman Berkett was actually dancing as a founding member of Mikhail Baryshnikov’s Hell’s Kitchen Dance in New York. She had previously danced with Aszure Barton & Artists, where she had also acted as Barton’s assistant, teaching alongside her both in the U.S. and abroad. Juilliard graduate Barbeito, on the other hand, was coming off of a copious freelance career in Europe, New York and Los Angeles, where she had worked with organizations such as the Metropolitan Opera, New York City Opera, Zvi Gotheiner, the Agnes DeMille Project, American Repertory Dance Company and Helios Dance Theater.

But, as fate would have it, the two dancers ran into each other again a couple years later. Barbeito said, “I saw her in another class in the same studio, and I said, ‘You’re back,’ and she said, ‘Yes. I might move here because my fiancé lives here.’ I jokingly said, ‘You should move here and we’ll start a company,’ just as a joke.” 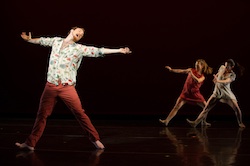 After Berkett ended up moving to L.A. with her now husband for “the sunnier weather and culture,” her and Barbeito hit it off, eventually deciding to launch the company. Berkett explained, “We ended up starting BODYTRAFFIC because we both felt there was a void in our lives in terms of our career. We thought that the work we had been exposed to when we were living in New York and abroad wasn’t really here in L.A.… So, we felt the desire to make that work happen here, especially for ourselves since we were coming from those types of backgrounds. Back then both of us as dancers felt like we were too young to stop dancing, so we wanted to pursue works with choreographers of that quality and style.”

Born out of their sheer love for contemporary dance, BODYTRAFFIC is now known for its family-like atmosphere and the dedication and exquisite talent the dancers bring to each performance and new commission. When looking for new dancers, Barbeito says they “always look for performers who are refined and super expressive.” 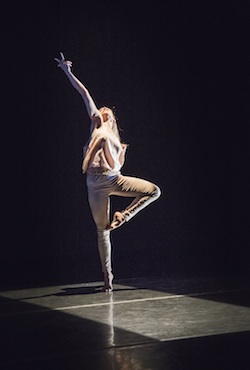 Berkett said, “I think we’re really trying to brand ourselves with diverse repertory so that we are distinctive. We’re trying to choose unique choreographers to give our company a distinct flavor and style, which is based in contemporary dance.”

“Lillian and I have a really strong commitment to choose choreographers that have clear, distinct choreographic voices, that when you see their work you know it was theirs,” she continued. “That’s why we’ve chosen Barak Marshall in the past, same with Hofesh Shechter, Kyle Abraham and Victor Quijada. We want people to be able to see that there is something that links all these together in sense of integrity and originality, but to also see diversity.”

Barbeito added, “We try to never just wash over a choreographers style but to really dig deep and take it on ourselves. We don’t want to just emulate it; we want to fully achieve it… Like our name ‘BODYTRAFFIC’ encompassing the diversity of L.A., we try to encompass the diversity of contemporary dance. We try to show the gamut of what happens today.”

In one BODYTRAFFIC performance, a viewer might see the theatrical and hyper-gestural choreography of Barak Marshall, the abstract and modern-based movement of Kyle Abraham and the jazzy choreography of Richard Siegel set to great American jazz standards. Berkett said, “I love it when people are surprised at how versatile the dancers are, how they can move in such different ways between pieces… We want our audience to all leave with something that appeals to them.”

The company recently finished working on a new creation with in-demand choreographer and composer Hofesh Shechter, one of the UK’s most exciting contemporary artists known for his unique physicality and his career with Batsheva Dance Company. Barbeito estimated that the dance work will premiere in fall 2014. 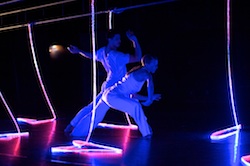 BODYTRAFFIC in performance at the Luckman Center in Los Angeles on May 14, 2011. Photo by Grant Barbeito.

“He is such a huge name in the dance world so we didn’t know what to expect the studio rapport to be like, but he was so funny and the whole experience was an absolutely delightful combination of fun and smart, very challenging work,” shared Barbeito. “And with the intensity of his movement, I think all of our dancers said that it was hands down one of the best experiences they’ve ever had. Each dancer grew artistically and physically through the process with Hofesh and his assistant Chris Evans.”

The company’s Summer Program will run July 7-26 for three consecutive weeks. Barbeito, who overlooks the education programs, said, “We will bring in Anton Lachky for the first week. Then the second week we’ll be bringing in a founding member of Hofesh’s company. He’ll be doing warm-up, technique and then putting Hofesh’s repertory on students, as well as creating something new. The last week we have Mauyra Kerr and Loni Landon coming in. Loni will stay on with the company, to set work on our dancers in August. She is a Princess Grace recipient and we are very excited to work with another female choreographer!”

Dancers must apply to be accepted to the Summer Program. The company will choose 25 total participants. For those looking for other opportunities, BODYTRAFFIC also offers sensational master classes and weekend workshops throughout the year, as well as free, open company warm-up classes.

Coming up, BODYTRAFFIC has much to look forward to. In addition to these education programs and the premiere of Hofesh Shechter’s new work in 2014, the troupe will tour to Quick Center for the Arts in Fairfield, CT, Annenberg Center for the Performing Arts in Philidelphia, PA, World Music/CRASHarts in Boston, MA and an undisclosed venue in Santa Fe, NM. This month, they will perform at APAP in New York, an annual membership conference of the Association of Performing Arts Presenters. 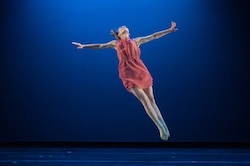 “The last six years has been a feat with the economic climate and trying to start a company from scratch, but now with APAP and more touring opportunities, things are beginning to look more positive and sustainable,” Barbeito said.

The company is also highly anticipating a new creation residency with choreographer Victor Quijada, Co-Artistic Director of RUBBERBANDance Group, in May in Los Angeles. Berkett enthusiastically called it “a super exciting commission” and shared that a set will be built for the work by L.A.-based artist named Gustavo Godoy.

According to the directors, the number one goal for the year is to give the main dancers of BODYTRAFFIC a full-time, salaried position. “Right now they’re at about 25 hours a week about half a year,” said Berkett. Barbeito added, “They have been so loyal to the company and we’d love to reward them for that.”

When reflecting as a whole on where the company started and where it has come from, Berkett said it has been an incredible journey. “We are farther along that I ever could have imagined or hoped for… I’m constantly shocked and amazed at where we’re performing now and the kinds of requests we’re getting and the choreography we’re getting to work on. But most of all, I’m really impressed by the dancers and how they have really helped us fulfill this mission. I’m excited to see where all this could possibly go in the next six years.”