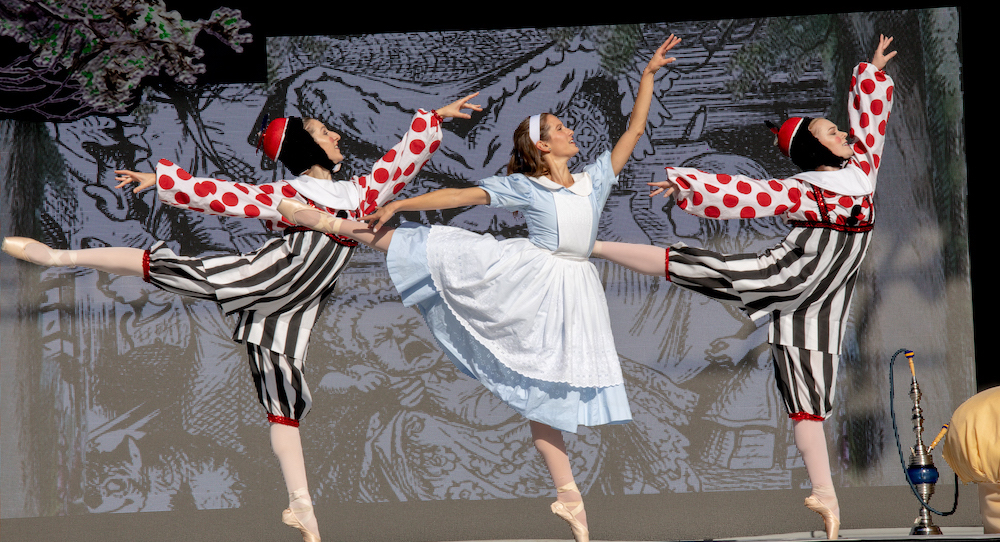 Some of those people are in the spotlight, and others — while no less indispensable — are behind the scenes. Some have been deeply involved and worked hard for months, and some made their contribution by buying a ticket and attending as supportive audience members. All of these people are part of making art come to life. Making live art takes a village, as that old African proverb might frame it.

This is always the sense I get from Island Moving Company’s (IMC) work in particular, and never more so than in the company’s recent fall programming of Alice in Wonderland and La Palomba/Ascending. Through broad collaborations with artists in and out of concert dance, community engagement, and accessibility across various measures, these two programs were an exhibit A of how the company creates deep and wide human connections through the art of dance.

Alice in Wonderful was part of the company’s family programming series — sharing stories through dance that can appeal to and are fully appropriate for the whole family. This is an excellent approach for engaging young local community members in the art of dance, as well as planting seeds for life-long appreciation for dance and live arts.

Two creative choices furthermore made the program more engaging and accessible. For one, a narrator, as Alice’s sister (Lily Ferreira), described the plot and delightful specifics within it. Yes, paper programs for story ballets often include plot synopses — but do audience members always read those? (Do they know that they’re there, and can they read them before the lights go down and it’s too late?)

This narration was a way to offer a deeper understanding of the story at hand, and also provide an additional layer of sensory interest for audience members with different inclinations and ways of taking in information — a layer which Ferriera offered both robustly and warmly (perfect for the young audience members in attendance). Engaging theater artists also seems to me like a potentially quite fruitful way to build cross-media connections and creations! Charles Kehres provided story adaptation and script.

For two, projections on a backdrop combined digital art and John Sir Tenniel’s intricate drawings to accompany Lewis Carroll’s zany tale — portraying images such as Alice nearly drowning in her own tears and the croquet game with flamingos as croquet mallets (coordinated by Production Manager Laurel Paquin, A/V Support and Crew from Advanced Production and Design).

These visuals bridged the classic and the modern, a sense imbued in the program overall, and were also simply visually entrancing. Costumes (by Nancy McAuliffe, Lily Bell, Lisa Bibeau, Carol Poole, Eileen Stoops and Renee Walker Tuttle) — with a striking plethora of colors, patterns and cuts — were another example of this classic/modern aesthetic, and also aligned with Lewis Carroll’s goofy sensibility. Dimitri Shastokovich’s score supported all of these qualities with its lightness and whimsy.

The Queen and King of Hearts (Emily Baker and Greg Tyndall) brought unforgettable theatricality to their roles, building the royal pride and presence of their characters to life — exaggerated to the point of parody, particularly with the Queen of Hearts — with their facial expressions and movement qualities.

Newport Academy of Ballet students further enlivened the stage — as well as deepened the community feeling at hand — as the Queen of Hearts’ “Cards”, “Stars” to light Alice’s way, her “Teardrops”, and “Strange Things” she encountered when first entering Wonderland. Of course, not to be forgotten, Brooke DiFrancesco danced Alice with rock-solid technical command but also the earnestness and innocence of her character as a curious young girl.

In her last narrative section, Ferriera asked audience members how they would get to Wonderland — an example of the engaging, reflective questions she offered throughout the program, thus immersing them more than story ballets commonly do. At these sorts of engaging questions in her narrations, as well as in truly captivating moments of characters being their unique, off-beat selves, I could see young audience members lighting up — even getting up and dancing at times. How the program was connected with the local community, with art that also engaged wide communities of artists, was undeniable. And it was an undeniably heartwarming thing to witness.

That same night I had the privilege of taking in La Palomba/Ascending. It’s one of those works that’s beautiful in its own right, but learning the context behind it (how it came together and was inspired, its deeper meaning, et cetera) makes it even more powerful to experience. Executive Director Peter Bramante explained this context in a short pre-show talk — how it all started with Ohlsen and IMC Marketing and Patron Relations Manager Shauna Maguire discovering a sculpture garden in Matera, Italy, layered onto the landscape of a large quarry.

Ohlsen was quickly and deeply moved to create site-based work for this sculpture garden, with sculptures by Italian artist Antonio Paradiso. Paradiso was one of 50 artists who received rubble from the Twin Towers after 9/11, and the resulting sculptures fill that quarry in Matera.

IMC worked with their Italian partner company, Breathing Art Company (Bari, Italy), to bring La Palomba/Ascending to Italy in late summer of 2021 — and also, Bramante explained, the Office of Rhode Island Senator Sheldon Whitehouse as well as the U.S. State Department. Hearing how this work came to be, despite the challenges that COVID has thrown at us, it struck me just how many people were part of the effort.

One can see how the site-based aspect of the work — dancing in the shadows of Twin Towers rubble shaped into sculpture — is quite central to it. To bring the work to the stage in the company’s Newport, Rhode Island home and out of that Italian quarry, IMC worked with Italian videographer and photographer Clarissa Lapolla to capture video of the work being performed in its intended site. This offered material for the company to project behind the dancers as they performed the work on the stage of the Great Friends lawn (film and sound production by Bramante).

It was visually arresting and entrancing material at that. Just like with Alice in Wonderland, multimedia offerings provided many different access points into the work for all sorts of audience members. Not that the movement needed any help offering visual delight, as it was just as captivating: fresh, bold, and highly evocative. With the support of dynamic scores (sound design and engineering by Joel Rabe), entrancing projections behind the dancers, and white but roughed-up costumes that allowed the movement to keep center stage (by Eileen Stoops), movement took audience members on an emotional and spiritual journey.

In terms of performances, all of the dancers were strong and fully invested (and to note: the company has taken on several new dancers this year). Yet, Lauren Difede, who always excels in emotionally rich contemporary ballet work, drew my eyes in particular.

Scene 1, Unforeseen, by Simonia de Tullio (artistic director of Breathing Art Company), instilled a sense of waiting — the calm before the storm. Dancers lengthened and lifted limbs — and in one another in partnering — as if floating, as if time was suspended. Scene 2, Echoes of Silence by Danielle Genest, similarly felt captivated by a manipulation of time, yet this was one of mystery and surrealism. In the moment of the unreal, things can somehow feel both impossibly slow and impossibly fast. Genest’s unique and daring movement vocabulary was a perfect match for creating this feeling onstage.

Scene 3, Frantic Search (by Miki Ohlsen), keenly illustrated just that — frantic search. The instrumental score picked up in tempo and vigor, as did the movement to match. Swooping torsos and limbs, and moving in formation together, the dancers embodied unity. Moving apart and not connecting, they embodied solitude — the solitude of fear. Lengthening in arabesque and reaching arms to the sky, it was as if they were opening to a higher power for grace.

Scene 4, Flight of Angels (by Genest), shifted the atmosphere to something much more other-worldly, ethereal but also in a way foreboding. Key in the movement seemed to be the coexistence of tension and support — arguably elemental to the human experience when it comes to closely engaging with other humans. Dancers caught another’s ankle to slow their descent to the ground — resisting but supporting. They came together at centerstage, arms again raised as if to receive grace from above, before dispersing with their own movement.

Infusing a sense of mystery and malleability was Scene 5,  Between Two Worlds (by Ohlsen). Movement had a quality of diffuseness and pliability reminiscent of rising plumes of smoke, or the indefinable haziness of a dream. Scene 6, Collective Sorrow (by Genest), called upon tools such as concentric circles and juxtapositions of proximity and distance to create a truly visceral feeling of community — yet community not without tension and sadness in the air.

Scene 7, The Lost (also by Genest), offered the first small rays of hope; even in loss there can be memories that make us smile big and feel grateful. Movement vocabulary creating tension between rise and fall as well as side-to-side instilled an embodied picture of that coexistence.

That hopeful feeling grew stronger and more concrete in Scene 8, Souls Transcending (by Ohlsen). In a particularly memorable part of that last section, dancers slowly walked forward, moving together both spatially and in timing. Reaching and then releasing with softness but clarity, the dancers illustrated both resolve and stability.

They did so together — and it wouldn’t be the same otherwise. The same is unequivocally true of how this work, as well as Alice and Wonderland,  came together and was then presented. Creating and offering live art takes a village. Would we have it any other way? I know I wouldn’t.