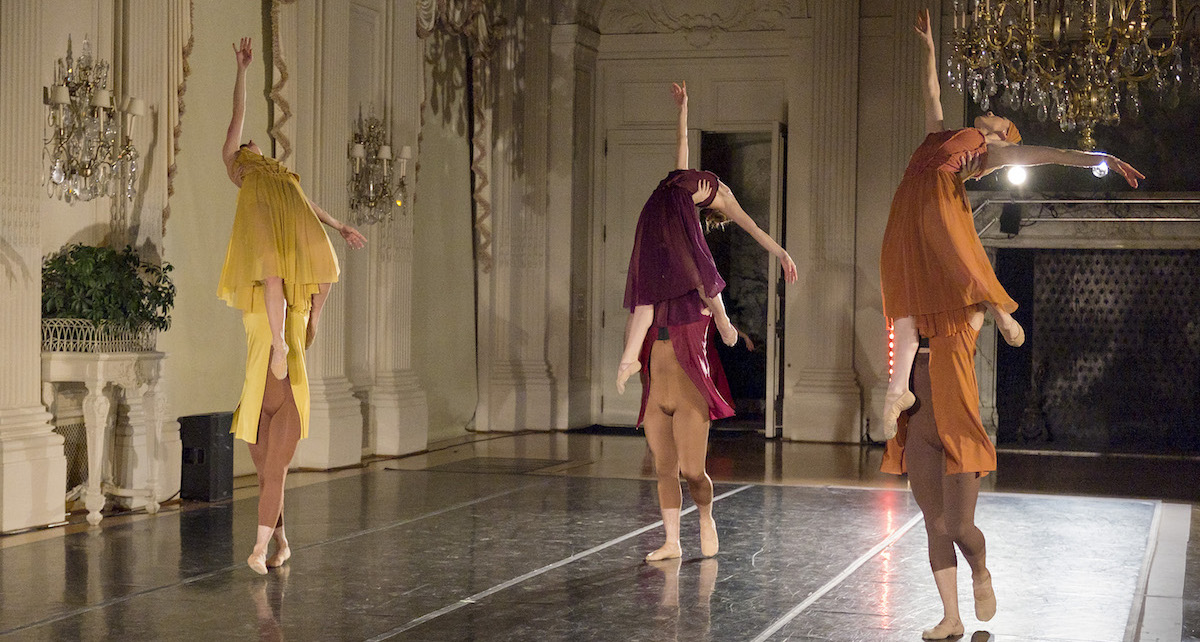 Successfully creating and presenting art involves striking several important balances. One of them is cohesiveness, yet variety that sufficiently engages various audiences and gives various artists a voice. Island Moving Company (IMC), based in Newport, Rhode Island, often commendably creates this balance – with a diversity of styles and subjects in its repertoire, frequent guest choreographers and unique performance settings. The company opened its 35th season with a weekend of double performances at Rosecliff Mansion – afternoon performances of Mother Goose and A Collection of Attitudes in the evenings. 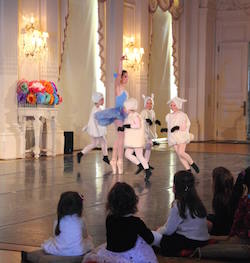 The first offered a family-friendly, fun-for-all dance experience, and the second a compelling assemblage of top-notch, innovative works from various choreographers. All together, the performances offered something for every audience member, yet managed to come together for a cohesive presentation of this company’s unique artistry. In this way, the two shows together were a wonderful celebration of what IMC has offered for 35 years.

Mother Goose, like films such as Wall-E and musicals like Annie, had the stuff to keep audience members of all ages engaged and entertained. “Humpty Dumpty” fell down Rosecliff’s beautifully red-carpeted stairs. All the King’s Men did what they could to put him “back together again”, moving up and down the stairs to create clean and creative formations. Setting the tone for the rest of the show, the physical comedy had both nuance for older audience members and a straight-forward genuineness for younger ones.

Unto the next room in Rosecliff, where Little Miss Muffitt and Jack and Jill had a chance to dance. Muffitt (Lauren Difede) moved with a lovely épaulement and overall carriage of the character. The Spider (Tara Gragg), who ultimately stole her bowl of curds and whey, was costumed quite effectively and compellingly; wires (mostly invisible) held up her arms and moved chillingly, as a spider’s movements often feel to us, with Gragg’s graceful port de bras. Jack (Glen Lewis) could indeed “be nimble, be quick” – doubling as that Jack and the fetcher of a pail of water. Jill (Katie Moorhead) displayed a wonderful precision and lightness in her allegro, not making a sound when executing intricate footwork.

Unto the next room, where we met “The Woman Who Lived in a Shoe”, “Little Bo Peep/Little Boy Blue”, “The Queen of Hearts” and “Mary, Mary, Quite Contrary”. Through it all, Mother Goose (Lisa Reimer) involved the audience, such as when recruiting a young boy to help cover a table with a tablecloth. She riffed off their reactions, fully improvising, like a seasoned stand-up comic. This audience involvement reached a peak with her calling up all the children at the end to dance. “Now it’s your turn!” she joyfully exclaimed. The children came up and learned a short phrase from a few company dancers. It was most likely a special moment for them, and special also for older family members looking on. It was a dance experience, not just a show, for all involved. 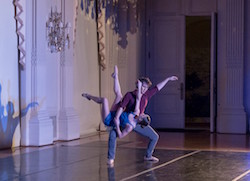 A Collection of Attitudes, beginning a few hours later, was a more traditionally proscenium stage performance. Yet, the Rosecliff ballroom space added a unique feel to it. Unlike Mother Goose, the appeal was to adults. On the other hand, the offerings were quite diverse, from many different choreographers. Any audience member of a certain age could therefore find something to treasure. Those choreographers included acclaimed dancemaker and educator Bill Evans, IMC Artistic Director Miki Ohlsen, and former IMC dancer (current Ballet Mistress) Danielle Genest.

Olsen’s There’s a Party in My Mind opened the show — a joyful work with suave jazz-dance inspiration. Men and women moved in out of various formations and pairings, re-living the same old relationship stories, as well as finding themselves in new ones. Through it all, they danced on. So the cycles of life continues.

Genest’s piece, Limit of One, a solo for Difede, began to demonstrate the incredible diversity of this company’s dancers (something that was evident throughout the show). Difede offered an ability to hold and release, to move from a joint on par with highly trained contemporary dancers. She turned and extended her legs impossibly fast. She held control over the shifting of her weight on the edge of losing it. Use of the weight of her head, into spinal ungulation and articulation, was simply beautiful to behold. The choreography, and Difede’s skillful execution of it, exhibited a conflict between the inner and outer – reaching out, yet drawing inward. Most of us in the modern world know a thing or two about that tension.

Evans’s piece, For Nana (with six dancers: Azamat Asangal Uulu, Brooke diFrancesco, Gragg, Lewis, Moorhead, Christine Sandorfi and Alejandro Ulloa Zepeda), used similarly captivating contemporary dance elements but was also grounded in a bit more classicism. Sweeping extensions and port de bras blended smoothly with faster push/pull and powerful moments verging on thrashing. A recurrent theme emerged of supporting one another, leading and leaning on surrounding bodies. Two dancers caught and carried another, one by each elbow. Dancers would slowly walk in small clusters, one hand on another’s shoulder. Lighting colors from designer Amanda Motta, such as midnight blue and blood red, reinforced the emotional content of certain powerful moments in movement. Only Evans himself could confirm that the piece was a dedication to his grandmother and their relationship. Yet, it exhibited the sometimes tumultuous but enduring connections between immediate family members. 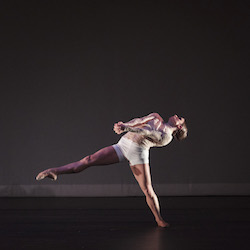 Lauren Difede in ‘Limit of One’, choreographed by Danielle Genest. Photo by Thomas Palmer.

Psalms closed the show — a piece incredibly rich in literature and history on multiple levels. Ohlsen re-staged the piece, originally choreographed by IMC founding member Michael Thomas, which she described in the program as a “labor of love”. She also there stated how the work’s subject matter of violence in the Middle East ”sadly, remains apropos today”. Leonard Bernstein’s “Chichester Psalms”, instrumentation with ethereal singing in Hebrew, was the piece’s striking score. The work fully created the world on which it commented through that music, authentic costuming (from Costume Mistress Eileen Stoops) and Israeli folk dance allusions. It conveyed that world’s cycle of anger, violence, healing and redemption through intelligent formations and soulful movement phrases.

How fully appropriate, and further wonderful, for the piece to return to the stage on the opening weekend of the company’s 35th anniversary. With other well-crafted and pleasantly unique pieces not described in this review, as well as with the afternoon’s Mother Goose, IMC’s tradition was upheld and honored. All signs point to that we can expect that tradition to move forward, and out in new directions, in years to come.