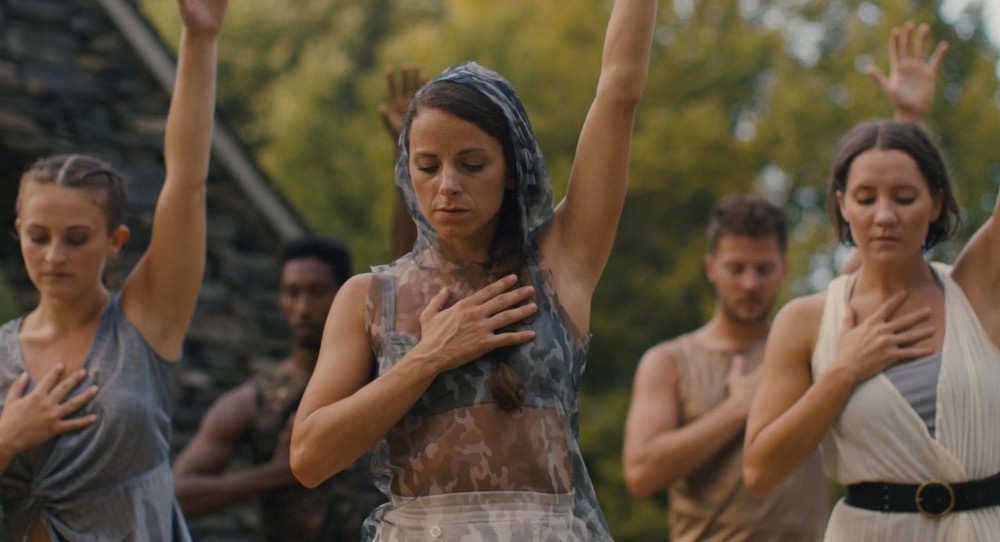 A special thing about live art is how it brings people together in space. In dance, this creation of physical community meets its unique offering of movement’s ephemerality; in space, a particular group of individuals are together in space for the first and the last time, to watch a performance that will also never be quite the same. Many dance artists have presented lovely dance films and other socially-distanced offerings these past months — but it’s just not quite the same as sitting together to experience live performance. This dynamic was part of why Newport, RI-based Island Moving Company (IMC)’s two fall season presentations felt so special, apart from the performances themselves beautifully created and performed.

The first of these was an outdoor screening of the company’s dance film, Out of Ruin, directed by dance filmmaker Marta Renzi and choreographed by IMC Artistic Director Miki Ohlsen and Associate Artistic Director Danielle Genest. Ohlsen and Genest conceptualized the film, with inspiration from a poem by Patience Strong. Audience members gathered to watch from socially-distanced lawn chairs at Cardines Field, the historic home of the Newport Gulls. Looking at the bases and home plate from my chair in the outfield, I chuckled a bit to think that I never would have thought I’d watch dance from a baseball field — but, hey, 2020 is about making it work however possible, in and out of the dance sector. Even while the presence of COVID loomed through things like everyone wearing masks and temperature checks upon entering, after six months, I was once again in community with others to experience dance art. There’s no feeling quite like it.

It was also wonderful to hear from Rhode Island elected officials from federal, state, local levels. Each speaking for a few minutes, they discussed the importance of the arts for quality of life, the economy and much more — as well as what they’re doing to get crucial assistance to the arts sector in this challenging time. With the sunset finally down below the horizon, then came a short “making of” film before the feature presentation, Out of Ruin. It offered intriguing nuggets of information about the creative process behind the film without prescribing meaning or giving too much away before the film was shown — a tricky balance to strike.

Then Out of Ruin started. The first shots are dancers peeking their head — and then limbs — out from behind graffiti-painted walls. They look around as if searching, seeking to learn more about what’s out there. There’s a simplicity but also emotional weight to their presence, as well as supporting aesthetic elements, a quality that would continue through the rest of the film. The score is a key element supporting this feeling, with a lightness but also somehow a depth to it. At certain moments, when the score is silent, the scraping of the dancers’ shoes across dirt paths and across concrete is also emotionally and aesthetically resonant.

Their bodies appear very grounded, their center of gravity kept somewhat low and a connection with the ground evident. Yet, the dancers also reach as if yearning to see beyond where they are. Their paths through space are circular, conveying continuity. The mood changes as we move inside of a structure, holding deep, dark shadows but also light streaming in from arched windows. A new freneticism is in the air as they move faster and the score becomes more energized. They still move in circular paths, fully utilizing the expansiveness of the space. The movement vocabulary has a balletic foundation, such as long lines and frequent external rotation, but in shaping and tenor of fluidity, it’s quite unique and fresh.

The dancers next move out into a setting that’s less affected by man-made tools and machines, into a forest’s clearing. The tenor of the score also comes to feel more hopeful. They have more space to move, all the way up to the sky, and some dancers lift others toward the clouds. The way their bodies intersect through the lines and other shapes of the movement is both fascinating and stunning. The visual picture is soft and crisp at the same time. As a new swooping feel comes into their circling motion, I feel a new harmony and sense of expanded possibility.

A final scene has them dancing in a large field by the sea. Even more harmony and possibility feels at hand as they move through all of the space one could ever want to move through. The colors of the pre-sunset sky feel nothing less than magical. The score gradually eases, one piano score ringing out — evoking a contemplation and introspection, a sense we can relate to in these times. Hope, resilience and the persistence of beauty shine forth even as the screen fades into credits and then to black with the end of the film. Out of ruin came the dancers in the film, and so can we — so we will.

The company performed their Emerge program the following weekend, a few towns over at Blithewold Mansion. An outdoor stage was set up on the incredibly large lawn in front of the mansion, overlooking the water. The sunset was spectacular as audience members (all masked and temperature-checked) settled in on blankets and chairs. The program began with Let Me Introduce You, a 2020 premiere choreographed by Colin Connor. The program explains how the ability for the dancers to dance together and once again share space, air and the “sensuousness wit of the music” inspired the work. Katie Moorhead danced a solo as the beginning part of the work, lit by a rainbow of light and accompanied by a jazzy score (from Gershwin’s Three Preludes).

Moorhead, ever expressive, danced with lines that ate up the space as well as a spine that rippled with musical nuances and beautifully surrendered to gravity. Emily Baker and Gregory Tyndall danced on next, their movement balancing and mixing angularity, circularity, weight-sharing and grounding in their personal center of gravity. Unease between the characters in the air at times combined with those elements to create a feeling of tensions between opposites, journeying across various spectrums — as individuals and with others. In today’s social climate of uncertainty and polarization, these themes feel particularly relevant. Yet, also, the magic of moving together in space — in communion with music — also truly resonated.

Following that, Rhea Keller danced Evoked, choreographed by Genest. Through varying levels and shapes — angular, circular and curvilinear in quality — Keller’s grace and grounded strength is wonderful to experience. Her presence, down to the fundamental element of her body moving through space itself, did evoke much: yearning, strength, vulnerability and more.

Genest’s Negative Space came two pieces later, danced by Raum Aron Gens-Ostrowski, Deanna Gerde, Tara Gragg, Keller and Jose Lodada. “In art, the space around and between the subject(s) of an image. Defining our boundaries, negative space becomes the distance between us,” explained the program.

Genest shaped this idea in choreography through truly compelling movement vocabulary and spatial relationships between dancers. Feet spread apart while facing another dancer, grounded and resolute, dancers opened up arms like a shark’s jaw and then closed them — opening to another but setting a clear boundary. They circled one another and formed clear lines, separated in space and remaining in one another’s negative space. Chimes in the score offered clear rhythmic boundaries as well, with which the dancers had precise but not rigid timing (not always an easy quality to find!). In this time of physical distance and many of us reflecting on what’s really most important to us, these ideas of boundaries and the distance we maintain between us and others is meaningful food for thought.

The program closed on a lighter note, with the infectiously fun and memorable Deconstructing Cole Porter. Choreographed by Ohlsen and danced by Brooke DiFrancesco, Lauren Difede, Timur Kan, Moorhead and Tyndall, it’s an embodiment of classic Cole Porter tunes. Ballet vocabulary is peppered with jazz and ballroom steps, which, like iconic film dance of Hollywood’s golden age, simply looks like a ball to dance. It’s also a ball to watch. Fun, reflection and simply the magic of people moving together through space — Emerge offered it all, after months without such treasures available to us. I left the program that night grateful, touched and inspired.