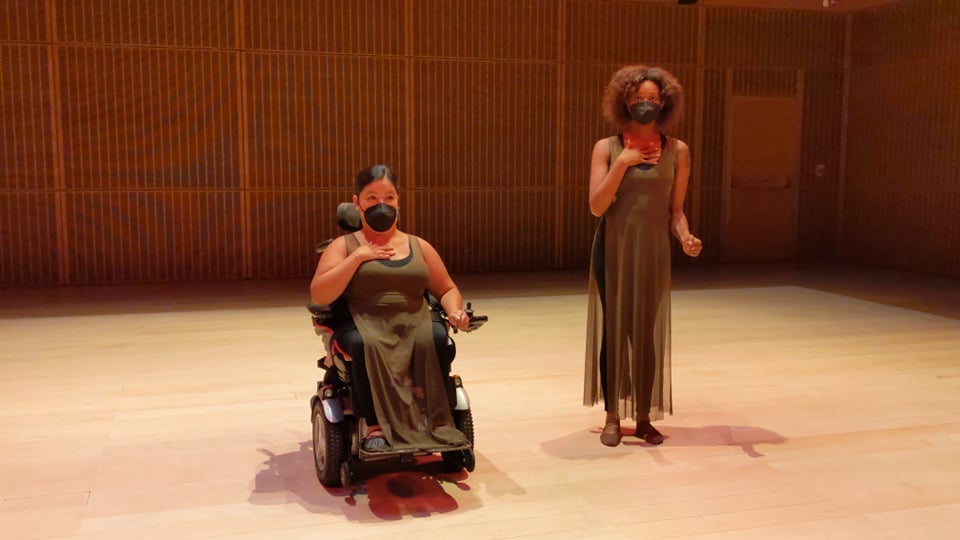 Art tells human stories. That’s a pretty obvious and universally accepted statement. Yet, the stories behind art can be more or less explicit in the final creative product. The artists of Abilities Dance Boston (ADB), in their signature approach of maximum accessibility for all performers and audience members, layered their stories on those in the works of Italian Renaissance painter Titian, formerly on exhibit at Boston’s Isabella Stewart Gardner Museum. The program was part of the museum’s Amplifier Project, an initiative aimed at highlighting those working toward social justice through the arts.

Thoughtful, soulful movement translated many aspects of these stories, the stories from both the two-dimensional and three-dimensional art forms at hand. Audio descriptions offered an avenue for all audience members to experience these dimensions and layers – and, furthermore, brought audience members further into the narrative of each work and the inner lives of their central figures.

The company made these stories all the more vivid with honest, authentic recountings in introductions to each work (again, as is the company’s norm, made fully accessible here with American Sign Language translations). All of these offerings opened a window through which audience members could peer into the stories behind the works in the program, rather than being one step removed at a wholly aesthetic level.

Ellice Patterson, ADB artistic executive director, introduced each work with context for the creation and concept for each work — including aspects of movement vocabulary, design choices and the lives (inner and outer) of the figures portrayed in each work. Patterson also introduced the program overall, at its very beginning, offering context for how it began and her place in that.

When she was first asked to create a concert dance program aligning with this Titian exhibit, she recounted, she at first found the paintings “incredibly white” and felt quite alienated. Yet, she added, she encountered the perspectives on the works of scholars who had seen it through the lens of their own intersectional identities, and that opened her up to the idea enough to make the commitment.

A solo from Patterson, Diane and Callisto, kicked off the program. She described it as illustrating “the joy of dance”, inspired by a vibrant Titian painting depicting the same. There was a good deal of that, with joy and hope through continuity of movement and the ease in her movement quality. Yet, there were also heavier layers, including choreography on the floor and descriptions of the challenges, labor and emotional weight of the artistic life and of creative commitment. As always, she offered in her movement strength yet also harmonious integration as well as release with breath.

She wore a dark dress suit, conveying strength, capability, power – or, in another interpretation, the darker things behind such apparel. It was up to each audience member to decide for themselves. In the end, she rose and faced forward, her energy lifted and proud. Whatever lay within her while moving through a complex inner world, either light joy or heavy hardship, she would stand tall and not be kept down.

In the third work of the program, Diane and Actaeon, two dancers (Kylie Sorenson and Cynthia Charles) explored their identity and being represented – for once – in center stage, versus off in the margins. They wore black with maroon ballet skirts, offering simple elegance. In movement, they remained mostly in unison but also from time to time found their own individual shapes and movement choices.

The movement vocabulary was balletic but also executed certain contemporary elements: in particular, qualities of release to gravity’s pull and ease through integrating the whole body in each movement. The movement was highly geometric, yet also sometimes serpentine and undulating. This multiplicity of shape and qualities resulted in something quite satisfying.

They remained close in space but mostly didn’t come into physical contact — together, yet moving forward in their own experience. Then, later in the piece, they did come into physical contact in one particularly poignant, memorable moment; they turned with the tops of their heads connected. Forces turned them and infused turmoil, but they supported each other’s weight.

In another poignant moment to end the work, they crossed their wrists and – as the audio description noted – they truly saw “each other” and “themselves represented” for the first time. They had found commonality and solidarity. They were marginalized in their own ways but, together, they moved and stood strong.

Following that was Mary of Tudor, an intriguing duet with the performers “embodying the badness of Mary Tudor in their own ways,” as Patterson had described in her introduction. She explained how Mary Tudor was excluded from the archetype of beauty. Janelle Diaz and Patterson, as performers, illustrated a finding of one’s own beauty and strength in a rejection of that marginalization – beginning with how they began with a hand on hip and head cocked slightly to the side, full of defiant attitude.

They danced with a lifted and confident quality aligned with that defiance. Diaz always finds lovely subtleties in her movement, and Patterson offered a daring and serpentine mysteriousness to her movement. There were darker tones in the overall atmosphere – yet a bright energy in the score (from Abilities Dance Director of Music Andrew Choe and Composer Erin Rogers) imbued an energetic, lighter layer, and also further built the defiance of the two central figures.

Toward the end, pushing forward and swerving side to side, they found a new grace and ease in their rebellious pride: their strength still very much present, yet settling. Throughout the work, as in every other work, descriptions not only described movement but also aspects of the narrative and the central characters’ inner lives.

Following that work was Philip II, with an inventive concept and memorable aesthetic. In her introduction to the piece, Patterson explained how Titian’s painting of Prince Philip II inspired the work; he was not a morally upstanding ruler, to put it nicely, and Patterson noted how “it leads one to wonder, ‘why is he still relevant?’” The work underscored, through movement, the harm of his hubris and colonial conquests – therein becoming almost a meditation on the destructive legacy of his domination.

The soloist, Lauren Sava, wore blue and was bathed in soft blue light as she danced: blue being a color of quiet and reflection but also of sadness and solitude. Their movement was released and curvilinear, organically serpentine but also supported and shaped. Through supple articulation of their spine and joints, they offered a pleading sense of surrender: one supported by a base of control.

Sava maintained these qualities through choreography that had a good amount of repetition – an approach that pointed to the generational harms of rulers such as Prince Philip, yet also the continued work for justice to push back against those harms. All of this enhanced the emotional life of the piece, and was also all possible without anything overly technical movement-wise. The description additionally enlivened the mental and emotional weight of the work, painting in words aspects of the narrative as well as the central figure’s inner life – as it did throughout the program.

The sixth work in the program, Danae, was another exquisitely danced solo with a compelling conceptual approach. In the piece’s introduction, Patterson explained how this work was in response to how Philip II believed himself to be quite the “benevolent benefactor”, despite all of the harms that he perpetrated. The central character, performed by Cynthia Charles, danced to “reclaim their own strength and ability to be their own benefactor,” as Patterson described it.

Charles seemed to move with timing and joint articulation supported by deep integration within their body and its deep knowing of the movement. They created a serpentine quality through their arms, with supportive and stable energy rising through their legs: freedom and exploration standing on a foundation of grounded strength. Yet again, all of this translated without anything overly technical. (Yet, Charles did execute some layered shapes and lovely lines.) At the end of the piece, just as the audio description noted, they gazed forward to new standards and norms of greater inclusivity and justice.

When we can openly speak – and move – about such evolutions in how we live together and treat each other, we can create them. When artists share their stories, verbally and/or through their very bodies, we can see what growth is possible. Seeing and believing it is the first step to making it real.

Just as ADB did with their concert dance response to Titian: Women, Myth and Power, we can look to the past, present, and future – all of that dancing together fluidly and receptively – as we do that work of imagining and creating. Thank you and brava to Abilities Dance Boston, and artists like them, for their indispensable part in building a world closer to that which we imagine for ourselves and each other.