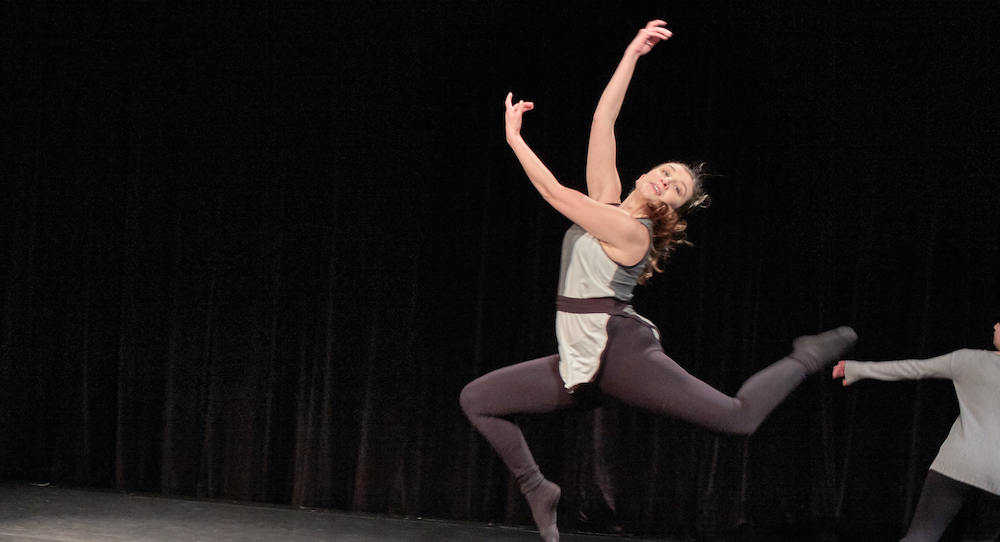 Dancing can make us feel free — free in our body and free to be ourselves. I thought about this essential truth after viewing Abilities Dance Boston’s Cultivate. It was all the more powerful to me considering the company’s mission of “welcoming dancers with and without disabilities…with a goal to increase inclusion in dance.” I came away touched by and grateful for the work’s affirmation that people of all abilities can find freedom and a sense of personal truth right in their own bodies.

The work began with “Deelie”, danced by Abilities Founding Director Ellice Patterson. She slowly moved on stage with a fabric-draped walker, thoughtfully and slowly stepping and lunging. The score had a voice with an electrified effect and a string solo played. Patterson’s voice then rang through the theater, layered over the score, her voice soulfully sharing personal and family history.

Her movement was thoughtful but also free, lacking rigidity or self-consciousness. The walker became an inanimate dance partner, as Patterson found different relationships to it — to and away, it supporting her and then her moving independently. She traced the floor with her foot, as if drawing, and my imagination went to her drawing her story with her body as her voice portrayed it in words. A memorable moment had her rising, knee bent and coming towards her chest, and then that leg coming back in a strong, clear line. Throughout the work, she stood in her strength and personal truth, and it was captivating.

Janelle Diaz, Jamie Desser, and Lauren Sava danced the next piece, “Greyscale”. Patterson choreographed it, and Andrew Choe composed the score (as musical director, he composed most of the music in the show). The dancers wore black and white tunics and black pants, establishing a clear and simple aesthetic. They began separated in space but joined by hands in stillness for a bit, their stance strong, and then separated as they began to move. A wonderful image had them in a diagonal line at different levels: clear, accessible, and visually pleasing. A later resonant moment had a dancer upstage and two dancers moving downstage, kicking back with satisfying ease and release. I wanted to move in such a free, yet structured and strong way with her.

One dancer later rode on the back of Diaz’s wheelchair, her legs both bent in attitude. I thought about how there must be so many possibilities in this physically inclusive space that the most visible and supported dance art isn’t aware of. Patterson called upon many of these possibilities throughout the work, my eyes and my mind with much to delight in chewing on. In another memorable image, the dancers rolled through their heads. Dancers on either side of Diaz in the center reached an arm up and then rolled through to fold forward. It was aesthetically balanced and appealing.

All along there was audio description of the movement that was happening, in line with Patterson’s mission of making dance accessible to all. Within a universal design principle, that accessibility includes experiencing the work as an audience member. The narration was clear and the language accessible. I almost forgot that it was there by the latter part of each piece, though certainly that likely wouldn’t be the case for someone who is deaf or of low-hearing calling upon the description to understand what’s happening in the performance. As it’s inarguable that everyone should have access to art, no matter what ability or disability they may have, this work is important and commendable.

The third piece, “Womanhood” had a compelling and clear structure — a solo to duet to trio, in and out of different groupings. Dancers offered a softness even with an evidently strong technical base. The instrumental score and costumes, dresses with “v” cuts, offer a Medieval feel that drew me in. The fourth piece, “Fire Shadows / Sombras de Fuego”, had a high society drama feel, with fluffy skirts and elegant interactions yet with a bit of sass. There was a pinch of Latinx flair with Salsa movement and notes in the music. Patterson capitalized upon compelling possibilities in its trio structure to bring visual and energetic interest to the stage.

Later came Louisa Mann’s “Tipping Point”, a piece with an intriguing theme of mirroring. The two dancers started at chairs, moving in unison but mirroring each other. They then left the chairs, shifting the dynamic feel of what was happening onstage. Coming back to the chairs later helped to build structure. There was a feeling of freedom and assertiveness about it all, but also a sense of being attached to something and then detaching; in an ending that I wouldn’t expect, one dancer exited the stage, and the two dancers gazed at each other as she did, the other in her chair. It made my mind spin with different narrative possibilities.

The final piece, “Spiraling Out”, had Patterson back, with a more settled and internal energy than in her earlier solo — until a sudden energetic shift. The score intensified, and she moved with more speed and energy. She turned through different levels, one leg extending behind her low and strong, using her walker. It all drew me in. Drums beat as she came forward with her walker. She left and moved behind it, with a sense of being pulled between two different forces: certainly a relatable condition.

The energy at hand slowed a bit, and her place in space lowered as she moved. Patterson came back to her walker, with a sense of resignation but also that flame within her not dead. She came back to stillness and the lights came down. Patterson had found freedom in her body amidst the forces pulling at her, as only she could. Cultivate reminded me of the power of such a turn of events, powerfully unique to each and every one of us.