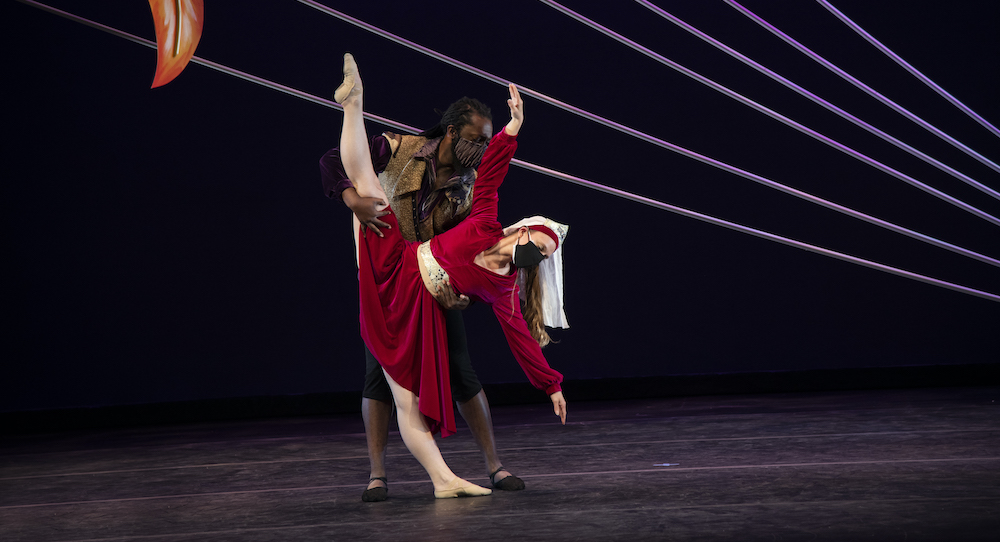 Fairy tales are a key part of conventional childhood, and — as such — they run deep in the collective imagination. As social values and perspectives change, do these fairytales become outdated? Does it behoove us to update them for the times? Abilities Dance Boston seems to have done just that, with ingenuity and passion, with Firebird.

The “firebird” is a Slavic fairytale archetype, often representing a difficult quest or task. Additionally, the Firebird ballet has many common fairytale elements — the hero, the mysterious being, the villain and princes/princesses. Abilities Dance Boston set the story in a new time and place, with new values and perspectives, thus recontextualizing it for today’s audiences.

As the work opened, the first thing to catch the eye was the set — composed of three main elements: a tall, curved and spiky set piece reminiscing fire, a street lamp, and a structure emulating a suspension bridge (of the “Big Dig” fame — audience members soon learned how the setting reflects elements of Boston, but is its own place). Then audience members heard narration describing the set, which someone was signing ASL in a separate bottom right screen.

True to its mission, Abilities Dance always takes all measures to create universal design within its performances — getting as close as possible to the same audience experience for all viewers, regardless of physical or intellectual abilities. Throughout the performance, narration described the movement but went even further; with poetic flourishes, such as describing dancers as moving like ballerinas in music boxes, it added another layer of pleasing reception of the movement. The original score (by Abilities composer Andrew Choe) also added color and atmosphere to the story throughout.

Act 1, Scene 1 was precipitated by a chance encounter of a Prince named Antoine (Antoine Hunter) and the Firebird creature (Ellice Patterson, Abilities founder/director). They met and then danced, pulling toward and away, moving with pleasing simplicity and full commitment. Just like in all story ballets, the tones — and shifts therein — helped to enhance the drama at hand. The Firebird left through a “portal”, the narration explained, and Antoine followed, not wanting to lose contact with the beautiful Firebird.

There, he met a group of princesses, elegantly costumed in flowy dresses of all different solid colors. With the exception of one jester character offering comic relief, their movement was just as elegant while also unique to each one of them. A short unison section was a lovely balletic offering, again pleasingly simple and fully committed. A soloist who danced with Antoine in the following act, Zahna Simon, was a notably lovely mover, with delightfully soft, pliable feet and floating extensions. Had Antoine’s center of affection shifted to this princess? Audience members had to wait until after intermission to find out!

An evil queen (Louisa Mann) entered right before intermission, and in Act 4 — the first after intermission — audience members met her “minions”. She danced with a brand of expressive expansiveness that spoke to a diabolical hunger for power. Behind her, the minions moved slowly but almost robotically, as if lacking autonomy and only acting on her behalf. A pleasing shift came with them all joining in unison — with contemporary movement styling, such as release swings, dancing on the floor and flexed feet, all contrasting the largely classical styling of Act 1’s characters.

The idea of building characterization through movement style isn’t a new one but nevertheless an interesting one and which Abilities did well here. Also characterizing these “minion” characters were costumes with checkered patterns and jagged, angular cuts — reminiscing jesters. This design was another contrast to Act 1’s characters, who had worn solid colors in smooth, rippling cuts.

Act 4 had the Firebird returning, rolling in on a Firebird-decorated wheelchair. In an intriguing turn, narration shifted to come from the perspective of the Firebird herself — not only describing her movement but wrestling with matters of responsibility, being, identity and acceptance. She moved slowly and with a quiet ferocity — pushing against expectations, she explained in narration. An arabesque and hop felt like a bird’s hop, and I also suddenly saw the Firebird’s crutches as beautiful wings of her own.

Narration also described living as her full self despite the expectations of the world around her, directly speaking to matters of the company’s mission. It felt clear that these artists not only work on these issues through the company but also live them. Shedding extensions of herself, she said, she danced with even more freedom and multidimensionality until she exited.

Narration shared that her magic had liberated all in the kingdom. The evil queen and her minions danced and then exited, and Antoine and his princess also moved together joyfully. The princesses also danced together one last time, with elegance but also a newfound power, stepping with powerful new piano notes. With a new air of harmony, all of these characters posed proudly together as “THE END” flashed across the screen. Questions remained, and hardships were endured — yet love, acceptance and bold authenticity won out in the end.

One could claim that this was the same old “and they lived happily ever after”, but this time it felt more nuanced. This ending, and the work as a whole, seemed to grapple with contemporary questions of identity, trauma and what it means to find one’s own path more than most fairy tales ever do — or at least in a more comprehensive, truthful way than they manage to.

From that daring approach, as well as from execution — from movement to design to music and more — Abilities Dance Boston created something resonant, thought-provoking and enjoyable with Firebird. In addition, staying true to the company’s ethos, it was something that all audience members could experience. Brava and until your next memorable creation, Abilities!