“I believe we need work made by disabled artists for the disability community writ large. We need art that explicitly acknowledges the work of disabled artists of colour not just in an inclusory way but in a manner that challenges the uniformity of disability narratives we have thus far promoted to the non-disabled world.”

These are the words of Alice Sheppard. In her Intersectional Disability Arts Manifesto, she writes: “Here is my stake: Disability is more than the deficit of diagnosis. It is an aesthetic, a series of intersecting cultures, and a creative force.” Sheppard’s approach to disability artistry is refreshing, especially in an industry that seems to be asking artists to create or be presented from their experience alone. Sheppard is pushing that boundary, and her work is challenging the way the world sees disabled artists and how to present them. 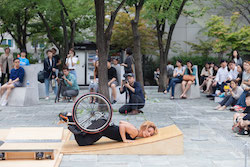 In 2016, Sheppard launched the collective Kinetic Light, which “creates, performs, and teaches at the intersections of disability, dance, and race.” And in 2017, the company commenced creation of its first full-length work, DESCENT. Born out of collaboration with dancer Laurel Lawson, and lighting designer Michael Maag, both wheelchair users themselves, the piece is largely influenced by Auguste Rodin, whose work depicted the western ideals of feminine beauty. Sheppard and Lawson have reimagined the roles of Venus and Andromeda, as interracial lovers. “They use their own racial and ethnic heritages as interpretive lenses for contemporary conversations about disability, race and beauty,” Sheppard explains.

Although parts of the movement and projections are influenced by Rodin, another element of this production is largely based on collaboration, the ramp. Designed specifically for DESCENT by Sara Hendren and students at Olin College, the ramp has been described as having its own presence, and at times seeming to breath. “For us, this set is real,” Sheppard says. “We use every edge, every surface. [It has a] sonic presence. We are vulnerable to the ramp all the time.” Partnering with the ramp and its environment gave way to a whole new movement vocabulary for Sheppard and Lawson, and created an experience Sheppard describes as “wheeljoy”, the moment when precision and freedom are expressed through movement in their chairs.

In an effort to make the show more accessible, the company has developed an app called Audimance, which allows blind audience members to experience the show in new and engaging ways. With multiple audio recordings, the listener can choose the standard audio description, a set of poems, and soon sounds of the wheelchairs on the ramp itself. Keeping true to Kinetic Light’s mission of accessibility, the app will be released in the future so other companies can make their work accessible as well. 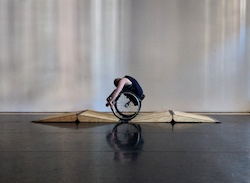 Although Sheppard doesn’t describe her journey as legendary, she is making history. On August 1, Kinetic Light had its Jacob’s Pillow debut and is believed to be the first company of wheelchair users to perform on the Inside/Out stage. When asked how she felt about the honor, Sheppard is overcome with joy, seemingly speechless for a moment before taking a deep breath and exclaiming, “We’re just so excited!” The company brought a mixed program of solos, duets titled Under Momentum, as well as excerpts from DESCENT, to the outdoor stage that offers free performances for as many as 1,000 guests. “The Pillow has been great in this process,” says Sheppard, who worked closely with Jacob’s Pillow and its production team to coordinate the load-in of mini ramps for Kinetic Light’s performance. “They made this happen.”