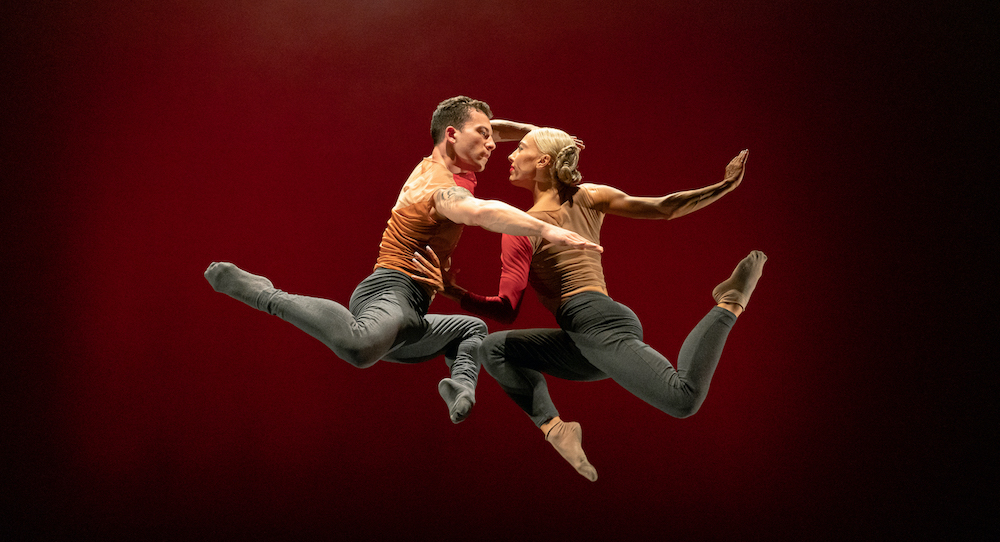 When I requested to review Parsons Dance – meaning that I’d see the company live for the very first time, at the venerated Joyce Theater – I had no idea what to expect. I certainly didn’t know that I’d see many works unlike anything I’d seen before (and, reviewing about one program weekly for over six years at this point, I’ve seen a fair amount). These were works also presented with true thoughtfulness and notable technical facility.

David Parsons, guest choreographers and all contributing collaborators demonstrated a unique ability to bring something bold and unconventional – and bring it well. “There’s nothing new under the sun,” they say; well, this program demonstrated that some artists can actually still find something new, and something wonderful.

Matthew Neenan’s Past Tense opened the night’s program, a thoughtful and compelling blending of the old and the new. From the score’s first notes, the classic went head-to-head with the modern – with a Pietro Locatelli baroque score but also quirky, gestural movement. Costumes (by Christine Darch) had classical elements such as corsets, but there was also the full breath and release of contemporary movement: fearless, athletic. Lighting (by Christopher S. Chambers) effectively spotlit featured dancers, while also bathing the stage in just enough light to both maintain mystery and keep the visual picture clear.

The dancers never lost control even while they released it. Even with its high level of gesture and fresh, unique shaping, the movement also featured technical feats such as fully gravitying-defying leaps and turns that just kept on turning. Dancers also filled the movement with breath, audible along with the sound of their feet moving across Marley.

Just like with the inhale and exhale of the breath, at times, dancers exploded movement, swift and boisterous, and at other times, they found something smaller and more internal. One might think that all of these contrasting elements would clash, but it all somehow came together cohesively. The old and the new – the classic and the modern, the codified and the exploratory – were negotiating, pushing and pulling, and then finding points to meet and settle.

Parsons’ Balance of Power (2020) followed, a solo performed by Croix Dilenno. The piece is truly inventive in many aspects – and also, over its course, offers something quite unexpected. In accordance with the title, the curtain rose and a spotlight came up on Dilenno holding a steady handstand. He slowly, just as steadily descended from that handstand (the sort of physical feat to which many can’t help but react with a dropped jaw and a whispered “wow!”).

A few other jaw-dropping balances kept that theme alive. Yet, soon the movement quality began to shift; Dilenno eased into more grounding, articulation and varied shapes beyond balancing. Intriguingly, he didn’t move far side to side or front to back, remaining in the same spotlight. He also wore simple black. Even with the simplicity of these elements, my attention stood unwaveringly – on every articulation, contraction, release, on every new breath and shape.

That speaks to Dilenno’s artistry but also perhaps on how daring to keep it simple can hold attention, even amaze and delight, just as much (if not sometimes more) as glitz and glam ever could. It’s a cliche, perhaps because it’s so very true – less can truly be more. I saw a theme of balance and strength evolving as the piece began, but it turned out that it spoke to so much more. On the other hand, later I looked to see that the work’s score was also titled Balance of Power. I laughed to myself in a reminder to not overthink; sometimes it can be that simple!

Chanel DaSilva’s On The Other Side (2021) was as thought-provoking as it was visually striking, a deep and meaningful concept supported by beautiful movement vocabulary and a unification of sensory elements. The piece took its time as it opened, the dancers taping out their own boxes to dance within, in an unhurried way. Audience members first reacted to the taping with chuckles, and then I heard curious “ooohs”. This choice was slowly becoming confrontive, gently asking audience members to take a deep breath and call upon some patience.

As movement began and progressed, another theme evolved – that of connection, and even deeper understanding, with other humans (and the lack thereof). Dancers moved in those taped boxes, in unison but separated in space – not acknowledging one another or finding connection in any other way except for the shared experience of common, simultaneous movement.

Later, they broke out of the boxes. The theme at hand felt clear, yet I was also looking for some sort of catalyst or discernible shift in the shift from the isolation of the boxes to finding connection with other dancers in space. My mind was more occupied with the wonder of the movement, however; DaSilva demonstrated a mastery of movement vocabulary that keeps common and familiar threads but also finds new possibilities throughout the work. It was both geometric and at other times undulating, grounded yet at other times unbound.

Lighting (also by Chambers) and staging served as other tools for illustrating connection to other moving spirits, and lack thereof. In the latter half of the work, one dancer reached out to another, gesturing as if reaching and searching. Later, in a sort of second chance (a “take two”, if you will), the same dancer reached out to the same other dancer – but this time she could embrace, she could find contact and connection.

Had she crossed to the “other side”? If so, what was the experience on each side like? What was that crossing over like? These are big questions, dissected and explored without a word. Thoughtful dance art can have that astounding power.

Parsons‘ The Envelope (1984) was another work demonstrating fresh thinking, and also that humor can be a wonderful part of contemporary concert dance. To begin the work, an envelope dropped on stage in front of one dancer. His snugly-fitting black costume, complete with a hood (costuming by Judy Wirkula), immediately set in place something zany and off-beat. He tossed the envelope aside, as one might into the recycling bin while muttering “junk mail”.

But it wouldn’t be that simple; it came back to him from the wings. Further efforts to rid himself of the envelope had a similar result – it just wouldn’t go away! Thus began a Looney Tunes-style comedy of errors. Delighted, I could just about hear Road Runner’s “beep beep!” and see Wily Coyote’s incredulous exasperation.

Further spurring this comedy of errors, more characters – similarly wearing tight, black, hooded costumes – joined the main character. A string of hijinks ensued, with the envelope always a central focus: passing it, throwing it, circling it, playing “keep away” with it. Indeed, whether by its own mysterious magic or the antics of these additional characters (or from a combination of both), that envelope still just wouldn’t go away!

Parsons brought his evident affinity for fresh and intriguing movement vocabulary to this work, within the stylistic bent of cartoonish comedy. That in it itself seemed to me a notable innovation. Any of that intellectualizing aside, it was all simply delicious to experience.

The ending was just as clever; one of the hooded characters managed to throw the envelope into the wings – but it then reappeared from another wing. The curtain swiftly dropped. Would that bloody envelope ever go away? Chuckling to myself after that curtain dropped, I thought to myself that my money was on no, it wouldn’t.

Parsons demonstrated further capacity to innovate with Caught (1982) a solo performed by Zoey Anderson. Concept, choreography and performance were all worthy of a hearty “brava, brava!” Anderson began the work moving in a spotlight. Wearing white and bathed in honey-colored light, there was something sweet and pure about her presence (costume also by Wirkula, lighting design by Howell Binkley). At the same time, she brought a ferocity to the movement, and the score met that with its electronica notes imbuing something more complex.

Then the real excitement came; a strobe light continuously “caught” Anderson mid-leap, mid-eye-popping shape in the air (lighting concept by Parsons). Those leaps and shapes astoundingly high and strong, Anderson’s power as a technician was undeniable. Just as impressive was how Anderson would catch the spotlight, standing still with feet wide, when intermittently the strobe lights went out and that spotlight came back.

The Road (2021) closed the program, and also demonstrated Parsons’ broadness of stylistic interests on top of yet another offering of something wholly fresh and unconventional. The work felt like a bright rainbow painted in moving bodies – but, interestingly, also didn’t feel overly saccharine (perhaps with its aesthetic range bringing darker tones). Rather, it came off as aspirational. While works like Balance of Power and Caught felt guided by a conceptual, visual or energetic catalyst, works like On The Other Side and this one were more philosophical and meaning-driven in nature.

The work was infused with a 1960s “make love, not war” vibe, yet that which came across with a more modern – and Parsons’ own – sensibility. Yusuf Islam/Cat Stevens’ songs, which made up the score for the entire work, spoke of knowing oneself better, evolving as humans and as a society, and reaching for peace (inner and outer) over seeking socially-defined measures of “success.”

This sense of harmony began with the very first formation, dancers standing in a circle with hands clasped – weaving and unweaving from each other’s embrace by moving yet not releasing their hands. As the work progressed, dancers danced through every possible inch of stage space – finding moments of personal expression and others of group cohesion.

If there could ever be a utopia illustrated in concert dance, this work came pretty close. My heart warmed, I reflected that this was a wonderfully bright note with which to end a program and send audience members back into their life. Even so inspired and alit by something so colorful, we could be challenged to think more deeply and take action toward change.

I’d argue that one purpose of art is to challenge our conceptions of what’s possible. We have to imagine it before we can bring it to be. Pushing boundaries, daring themselves and us to dream, never accepting the answer that that’s the way it is so that’s how it should stay – artists like Parsons and all collaborators in this program can be lights into a better future.

At this inflection point when much is changing in our world, one could argue that we need all of that more than ever. It also doesn’t hurt to experience something simply beautiful on the way there. I hope that you’ll be with me in the audience to do so!