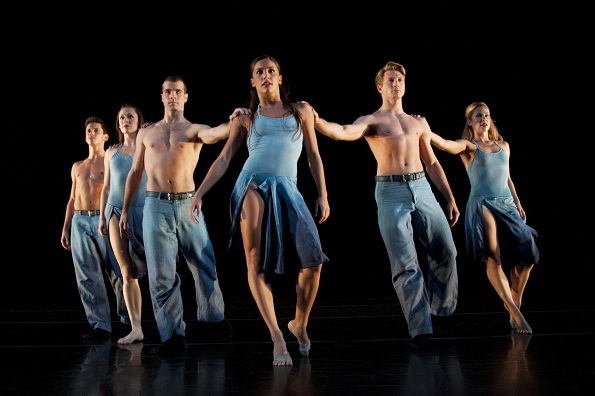 A night of dance that leaves you inspired and wanting more is a good one, and that’s just how it was with Parsons Dance during their season at the Joyce Theater this January. The company presented an array of old work and new premiers, all musically-driven and all full of exciting, passionate dancing.

The intermission-less program on Wednesday, January 18, began with Parsons’ newest work, Round My World, with music by contemporary composer and cellist, Zoe Keating. A pool of light (used often in Parsons’ work) shines down on the six dancers, dressed in denim-colored dresses for the women and actual denim jeans for the men, who move slowly in a circle. We are given these few moments to register, to become present, and then the dancers soon enough progress and pick up the pace. As the name of the piece suggests, the dancers use every opportunity to create circular shapes – individually, with partners, as turns, as lifts, with their arms, or all joined as one. Even Keating’s long cello notes begin to sound like circles. 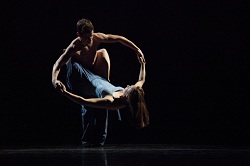 Round My World takes the initial clean circle and, throughout the piece’s series of duets, abstracts it so that the recurring circles, although still present, become less obvious and more a part of the memory of the dance. As the evening’s opener, we understand that Parsons’ work allows each dancer his/her moment and that dance is meant to be shared – with the audience, with other dancers and among partnerships onstage.

Next, an excerpt from Step Into My Dream is simply a playful dance for boy and girl. Eric Bourne and Sarah Braverman look stunning in white together, as they move through this jazzy duet. The middle becomes almost a call and response turning contest, but the piece remains light throughout.

Former Parsons dancer Katarzyna Skarpetowska is featured as guest choreographer in the program’s next work, A Stray’s Lullaby, with Kenji Bunch’s music, a fusion of old city sounds and rooted, throaty country croons. The dancers look great as individual characters in period costumes by Reid Bartelme. 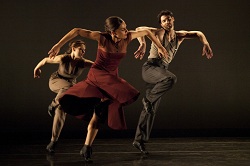 The piece opens with the dancers moving like liquid amidst gritty car horns and raindrops. They soon depart, and Christina Ilisije elicits a most passionate solo, arching, bending and throwing herself to the ground. She is fighting with herself and reaching for something offstage, from where the streams of light hit her. Jason Macdonald dances a solo where he appears larger than life as he sautés around the Joyce stage, which suddenly seems small. At the end of his passage, he too, is drawn to a light, this one way downstage, and his even more enormous shadow is cast on the backdrop. And one can’t glance away from the beautifully exotic Elena D’Amario, partnered by Christopher Bloom.

Next is Parsons’ Caught, a guaranteed crowd-pleaser, during which one dancer (Steven Vaughn on this evening) moves in and out of scattering spotlights before daring to stand, then jump, then leap through strobe lights. Vaughn’s commitment and picture-perfect clarity make him appear to fly. If the audience was to depart Caught for just one second, it would think, “Is this real?”

The program’s closer, Swing Shift, simply exemplifies the joy of dance and shows that Parsons’ dancers really love what they do. They are so clear in their shapes, so caring in their partnering and so focused with their eyes. And in Swing Shift, like in the entire program, each dancer deservedly gets a chance to shine.