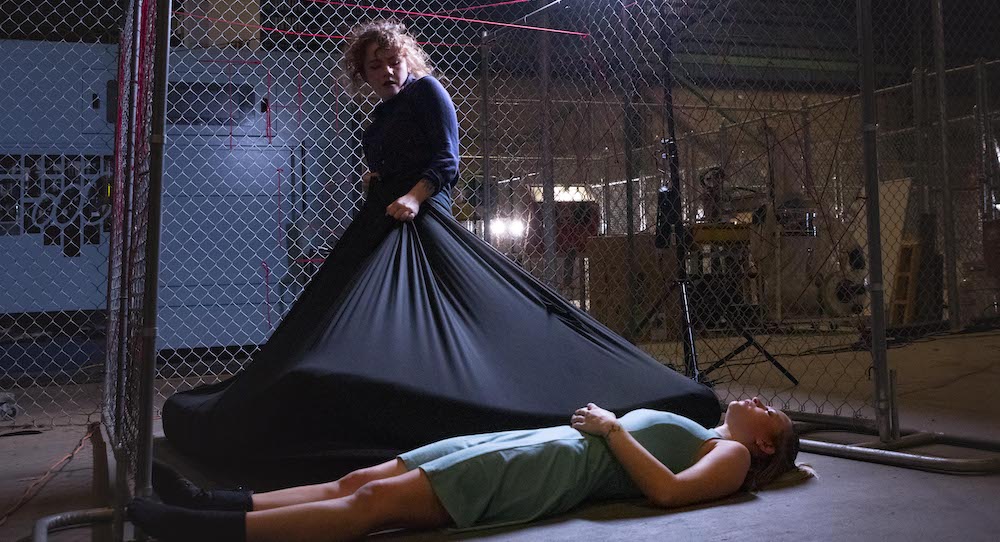 Visitor Parking by mignolo dance allows audiences to walk in the footsteps of a patient navigating a wide array of mental health issues. Her journey encompasses scenes of anguish, reflection, brazenness and honesty. In tracing this patient’s path, the audience is offered a lens of empathy; I felt able to witness the complexities the patient was investigating within herself and her life.

Visitor Parking is a site-specific, immersive, multimedia piece by mignolo dance, with music by Haven & Hazard and Teddy Hyde, and set design by Haven & Hazard and Andrew Lackland. The piece is rooted in contemporary dance, with choreography by mignolo dance Co-Founders Charly and Eriel Santagado in collaboration with the dancers. Visitor Parking was presented at Gardenship Art in Kearny, New Jersey. Although the venue – which is essentially a warehouse offering visual and performing arts space – felt enormous for the eight dancers (Charly Santagado, Eriel Santagado, Bailey Benoot, Victoria Bond, Erika Fawcett, Karolina Holmstrom, Mikayla Russo and Elaina Stewart), it was a treat to see these powerful women eat up so much of the space.

Throughout the large space, the eight performers guided the audience through different vignettes of the patient’s story. It was always clear where to look, although the audience could look anywhere they wanted. The dancers used red yarn to “block off” the audience from entering certain dance spaces, some of which included a Marley dance floor, a space enclosed in chain-linked fence, and a rectangular grid meant to resemble a basement filled with props and toys.

This red yarn could have been seen as symbolizing an attempt to block certain thoughts and actions. The patient tended to visit peculiar places in the middle of the night throughout her story – such as a basement, a parking lot – despite her efforts to stay in bed throughout the night.

Visitor Parking began with the patient’s therapist – portrayed by Charly Santagado – seated in a hollow, wooden structure of a house behind the Marley dance floor. Its dollhouse look correlated with the collection of abandoned wooden block toys that were in the nearby basement scene. Charly masterfully danced a string of mignolo dance’s Movenglish “translation” movement vocabulary, which are gestural movements meticulously matched to words or sounds. In this case, they were strung to Elizabeth Bishop’s poem, “Visits to St. Elizabeths”, which the audience would come to hear numerous times in Visitor Parking. The poem was eerie, constantly echoing the refrain, “This is the house of Bedlam…” and was spoken live by Charly while she danced.

Once the entirety of the poem was complete – praise for Charly’s movement repetition, which had to precisely match the repetitions of the poem’s lines – the audience saw the patient, portrayed by Eriel Santagado, burst into the space distraught. Her dancing embodied larger movements than Charly’s gestural opening. Although the patient was dancing in distress, Eriel’s movement control was clear. I enjoyed seeing nods to Charly and Eriel Santagado’s former gymnastics careers, with certain inversions and perfectly poised landings from that history implemented into their phrasework’s vocabulary.

Eriel ultimately joined Charly in the dance Marley space. They sat down opposite each other on wooden chairs, and Charly held a clipboard; Eriel’s character was in therapy. The patient would alternate sitting down and “talking” to Charly (they danced in Movenglish to a recorded conversation of their own voices), and exiting the sessions to demonstrate her various vivid experiences. The audience saw Eriel go into the basement, go to sleep, go outside into a parking lot and even sit down in the hollow dollhouse. Charly repeatedly asked Eriel, “How did it go this week?” Eriel generally answered with variations of, “About the same.” She sometimes felt a little better, and sometimes a little worse. As in life, there was never a constant upward trajectory; there were highs and lows.

Visitor Parking’s moments of dance were not constant, but when they occurred, they were intense, beautiful and exhausting. I remember a scene when Eriel had entered the basement, and she was seated with two other women (Bailey Benoot and Erika Fawcett). They meticulously played with the various toys: bubble wrap, an abacus, a washtub, other wooden block toys. There was a monotone voice recording in the background that was counting in fours, and it began counting progressively faster. Bailey Benoot, seated in the center in front of the wash bin, scrubbed her hands with increasing intensity. She sloshed water on the floor, stood up, and danced with the same combination of structure and abandon as the voice in the background. Her long hair flew loose (and wet) and the audience watched her dance her heart out of her body. She flailed her limbs with madness when Eriel dumped the entirety of the wash bin onto her, soaking Bailey from head to toe. Whether this moment was supposed to represent a poor decision by Eriel’s character, a moment of the patient losing control or a moment of fighting an inner battle, it was shocking.

Another motif throughout Visitor Parking was the use of three parked cars inside Gardenship Art. Every performer (other than Charly and Eriel) at some point sneakily made their way inside car while a different scene was occurring. They would call the audience’s attention to the parking lot scene by turning on the lights (even the hazards) and honking. I could even hear the engines revving. The dancers never drove the cars anywhere, but they alternated shifting seats inside the cars and climbing through the cars’ windows and onto the cars’ roofs in a slinky, slithery way. The images were disturbing and curious. Eriel always seemed transfixed by the dancers in the cars, as if she were wondering whether she should be there or not.

Toward the end of the show was the single moment where all eight performers danced in unison. Each performer demonstrated stamina, strength and a commitment to the story, and it was extremely satisfying to see all eight dancers come together. To me, this moment represented acknowledging the patient’s progress and honesty within herself, and not necessarily the ability to say, “The patient is all better now.” In Eriel’s final therapy session scene with Charly, Eriel’s voice recording was more distorted and robotic than in their previous sessions. This suggested to me that the patient was ready to be more honest in her meetings; rather than saying, “My week was about the same,” every time, she was able to admit to more specific experiences so she could begin to work her way through them.

Visitor Parking concluded in an unexpected way. The audience was guided by the eight performers to a separate room (through a black hallway meant to look like a tunnel) which was covered in red yarn, blank pieces of paper and pens on the floor. Some audience members were hesitant to enter the hallway, but the dancers kept coaxing. Once inside the room, it was fascinating to witness how some audience members picked up a pen and paper immediately and started doodling and writing things. Others looked nervously at the papers and did not want to write anything at all. It was in this final moment that I really felt like I got to enter the patient’s shoes. I had the option of laying my truth out (on a piece of paper) or keeping it to myself – but there was an external pressure urging me to write something.

I give a tremendous bravo to the artists of mignolo dance for the production of Visitor Parking. The piece was created masterfully with a huge array of art mediums, which worked together in harmony rather than cacophony. Ultimately, Visitor Parking viscerally challenges its audience to recognize and de-stigmatize mental health-related conditions.

By Kristen Hedberg of Dance Informa.