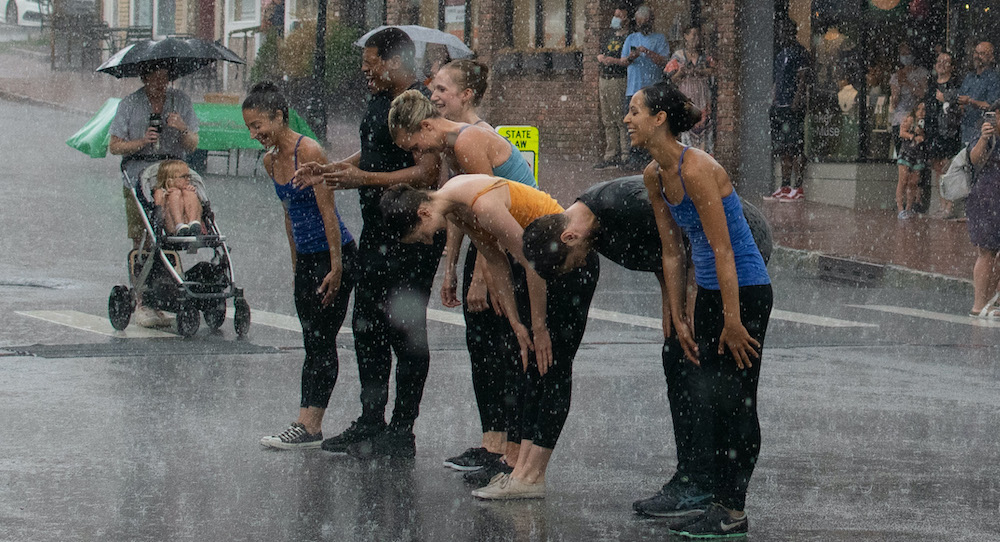 When COVID effectively shut down the world in March of 2020, no one knew what would happen next or how long it would all last — but we likely didn’t picture ourselves still wearing masks and physically distancing a year-and-a-half later. Throughout that year-and-a-half, as is widely known, the arts have faced immense unpredictability and financial strain.

Over arts communities has hung a cloud of sadness at missing what was — and an exhaustion at continuing to deal with what is. Wide-scale vaccination got us hugging and moving together close in space again — then the Delta variant crept up behind us. That light at the end of the tunnel we were all seeing? It began to seem farther away, and maybe even to fade entirely.

At the same time, arts communities have shown their incredible adaptability and fortitude like never before. Many within those communities have once again seen and felt why they love — and simply need — to do what they do. Access to the arts has broadened through virtual offerings, and many are having meaningful conversations about the place of the arts in society and how that society in turn supports them (or fails to do so).

Arguably, amongst art forms, all of this is even more sharply relevant within dance — being so tied with the body and bodies together in space (while we mask, physically distance, and spend lots of time alone or in small groups within small indoor spaces). To learn more about where the dance field is now in the context of COVID, Dance Informa spoke with four top dance leaders: Robert Battle (artistic director, Alvin Ailey American Dance Theater), Lydia Johnson (artistic director, Lydia Johnson Dance), Jonathan Stafford (artistic director, New York City Ballet) and Joshua Bergasse (New York City-based musical theater choreographer).

The light in the darkness

Battle, Stafford, Johnson and Bergasse all didn’t sugarcoat the challenges of this time. Stafford describes it as “devastating.” Johnson recounts the frightening uncertainty of those early weeks of the pandemic, and the incredibly challenging decision to cancel the forthcoming season — a season just about to start, complete with exciting guest artists such as Craig Hall, when COVID hit. “Realizing then that the performing arts as a whole field was shutting down was almost surreal amid the haunting sense of grave illness and death,” Johnson notes.

Operating as a project-based company, with other income streams such as teaching on hand, helped keep some amount of income coming in for those involved with the company. Without that, along with two PPP loans, the company “might not have survived, as general operating expenses continued despite a huge drop in income,” Johnson shares.

Bergasse notes how dancers are just plain sick of things like taking ballet in their living room (yes, many in-person classes are running, yet to keep in mind are that some dancers are immunocompromised or have people close to them who are, or live in regions of the country with high COVID rates; conditions vary).

Battle believes that for dancers with such relatively short careers, having a year and more of that interrupted is nothing short of a “psychological trip.” He also notes how all of this has given Ailey space and time to step back and “realize more fully how much we need to do what we’re doing, to feel that exchange across the footlights. In some ways, we typically don’t realize the gravity of that.”

Both Battle and Stafford have also more clearly seen the extraordinary resilience and malleability of those with their respective companies, as well as the field more broadly. Battle shared how Ailey dancers truly “stepped up” to the challenges of the time at hand right after being sent home from a national tour right when lockdown started. They performed sections of Revelations from their own spaces, which led into Ailey All Access — offering both archival and premiering digital programming free of charge to anyone with an internet connection, as well as more than 30 weekly virtual dance and fitness classes for people of all experience levels from Ailey Extension. That programming reached millions of people in 121 countries.

Battle was also deeply moved by the fortitude of AileyCamp students, attending and giving their all virtually (AileyCamp also being what he described as the “heart and soul of the company,” first established to extend access to arts education to youth who likely otherwise wouldn’t have it). “For some of these young people, that’s a huge thing to ask, to have the technology and to stay focused,” he says. “The world was minimized to their Zoom screen, but they showed up!”

In their own way, Johnson’s dancers also stepped up to meet the moment; they maintained a sense of community through regularly taking class together over Zoom, rotating teachers to share the workload and what they each had to offer one another as educators.

With a similar sentiment, “I’m very proud of our organization for weathering this storm and getting through this unpreceded period in history,” Stafford affirms. Noting NYCB’s digital programming from a film directed by Sofia Coppola to Kyle Abraham’s work created at Kaatsbaan Cultural Park to Justin Peck’s Thank You, New York, filmed on location all throughout NYC, he added that “any chance we got to engage our dancers and musicians and do what we love was a highpoint. We’ve gotten through this time with a lot of hope and optimism for what’s to come.”

With respect to the field beyond NYCB, Stafford was inspired “to see how quickly the field turned to the digital realm and really embraced dance on film. A huge burst of creativity came out of this incredibly challenging time.” Bergasse notes how we’ve also learned a lot about cultural diversity, both on stage and backstage. “It’ll only make the work that much richer,” he believes. He also believes that this time has also allowed us to learn more about ourselves, and from that place be more thoughtful about how we go forward in our creative careers.

With that dynamic which Battle describes — where artists have lost time in short careers, and we could lose more time at any moment — “it could be that you realize you want to spend time doing the work that you really want to be doing,” Bergasse asserts. For him personally, he’ll now ask himself if a certain project is that for him — rather than taking it simply because he’s available, as he once might have.

For her part, Johnson describes a poignant experience from summer of 2021 that illustrates not only the resilience of artists but also the transcendent strength of the human spirit more broadly — that which art can both bolster and exhibit. Her company was performing outside, and toward the end of the last section, the skies suddenly opened up. Not to be deterred, the dancers continued performing through a torrential downpour.

“It felt redemptive, hopeful and triumphant as we were performing again despite the pandemic and weathering yet another storm, albeit of a different kind!” Johnson says. “As the dancers bowed in the pouring rain, we were flooded with love and gratitude. People had stayed – drenched — to see the end, and then they cheered so joyously. I truly think all of us were celebrating human perseverance and the survival of creativity and joy that day. Audience members described choking up, and many of us had tears in our eyes as the dancers came to the final moments and the piece finished.”

Stepping toward the light

All of that considered, many questions remain. How should we implement what we’ve learned, for the benefit of the dance field and all whom it touches? The path forward is still uncertain, but how can we make the best of whatever it ends up being? Partly from his current experiences working on a new musical, Bergasse emphasizes the importance of personal responsibility and commitments to those with whom we work.

Everyone on the musical, apart from being vaccinated and tested three times a week, consciously “exercises a lot of personal responsibility,” he affirms. With respect to the field at large, “the ability to work on a production is so important, and so precious, and artists know they have to protect it,” he notes. And sometimes that means refraining from certain social activities that one might want to enjoy. It very well might have to be a choice between the two, Bergasse says. The commitment at hand is “not only to yourself but to your whole cast, production and company,” he adds.

Bergasse also discusses how, as we figure out how to bring live performance back safely and at a wider scale, part of that has to be making audiences feel confident that they can attend and remain safe — because “without them, what are we?” At the same time, he believes that there will “always be a place for performance. There’s an energy that happens between performers and audience members that can’t be replaced.”

Speaking to creative process, Battle invokes another kind of unique energy that happens in the rehearsal process between dancers and choreographers — the magic of creating something out of nothing by moving bodies through space with intention and curiosity. That “electricity” fuels what audiences see and love on stage, Battle affirms. With any luck, that’s not something we’ll lose again. It’s certainly something to hold precious, as Bergasse would describe it.

Battle also notes the importance of not taking for granted within a creative life — not only rehearsing and performing together in space but also all of the everyday wonders that fill our lives. “Dance might be how you make a living, but how you live and experience the world — with empathy and curiosity — informs that.” Just as sharing space for art can be gone in a moment, as has become all too clear, so can all of the ways we enjoy life and one another.

Battle also believes that virtual dance offerings are here to stay, and that it’s something that Ailey will at least certainly maintain — “once that cat is out of the bag,” he says with a chuckle. Stafford thinks similarly, that “the artform is forever going to be a bit different, in a good way. This moment helped make us more accessible.”

While areas such as company financing will likely continue to be challenging, “the creative energy in choreographers and dancers will find a way in some form or another,” Johnson affirms. “The connection of artists to each other is sustaining and that continues to be a true lesson, and has made all of us at LJD even more grateful for each other and for those who support us,” she notes. Battle has been thinking about the Maya Angelou line, “The horizon moves forward to offer new steps of change.” The horizon is moving forward, and new steps of change are here for us to take.