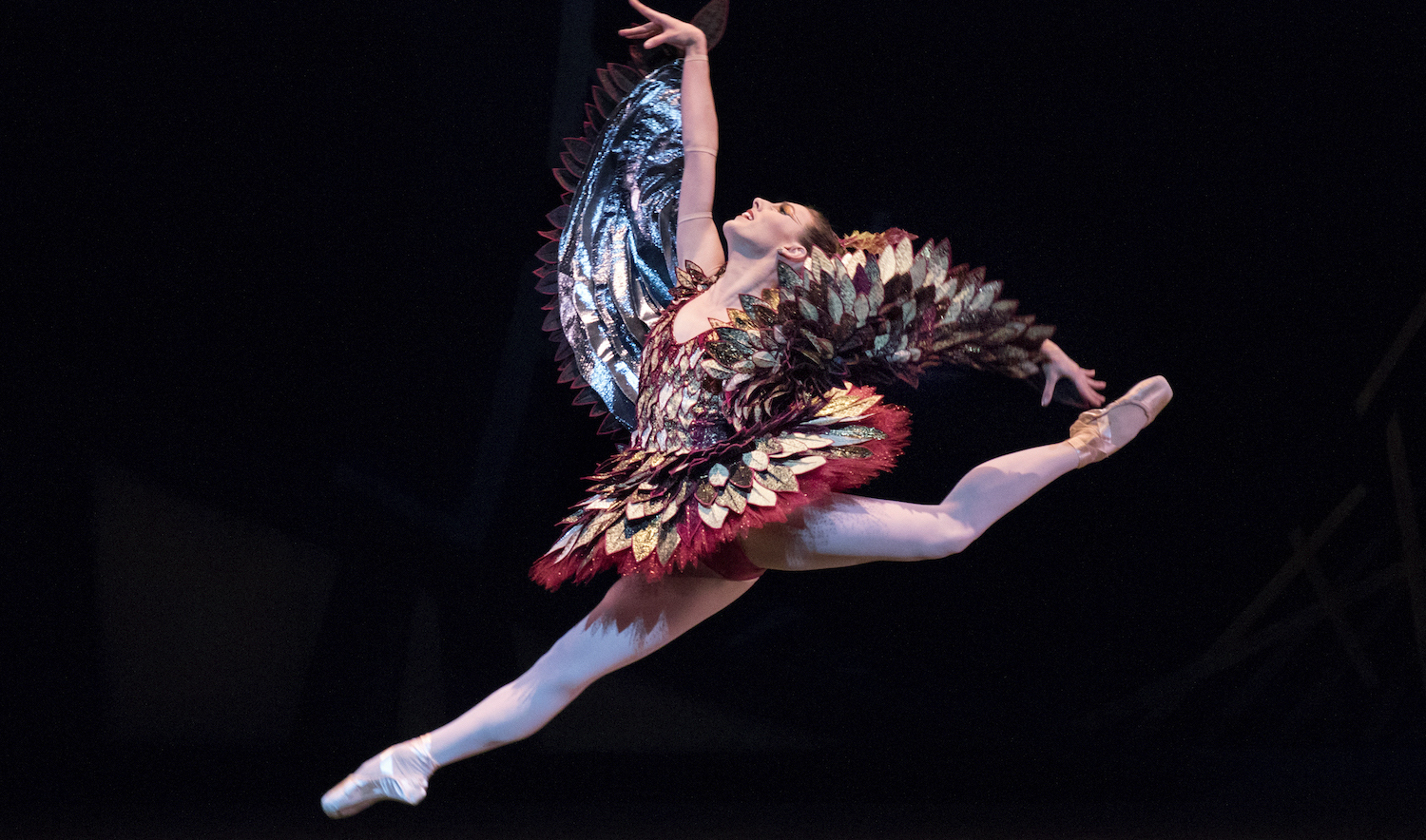 Peck shares about her “hardest” season yet and her flourishing relationship with Body Wrappers.

At the end of February, New York City Ballet (NYCB) dropped the curtain on its Winter Season and, with it, perhaps ended Principal Dancer Tiler Peck’s most demanding season yet.

“I think this is the hardest season I’ve ever had,” she shares in her recognizably sweet voice during a phone conversation on Monday, February 15. “I think I’ve had a total of three shows off for the whole four weeks, which is not really typical for a principal dancer.” 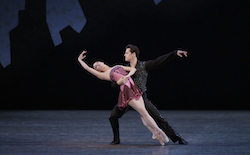 Coming off of a jam-packed holiday season performing in George Balanchine’s The Nutcracker from late November until after New Year’s Day, Peck and fellow company dancers almost immediately dived into the Winter Season, which included a world premiere by Justin Peck to a commissioned score by Bryce Dessner; a few different “All Balanchine” programs with mixed repertory; the return of Peter Martins’ staging of August Bournonville’s La Sylphide; plus contemporary works like Christopher Wheeldon’s This Bitter Earth, Martins’ The Infernal Machine and Justin Peck’s Paz de la Jolla. All in all, Peck danced 31 performances in 13 different ballets and used 34 pairs of pointe shoes for the Winter Season.

“I’ve been so lucky to get to dance so many amazing ballets, and it’s not over,” she says, referencing the new ballet by Wheeldon she’ll be working on this spring.

Some of the works Peck performed in January and February were Liebeslieder Walzer, Tschaikovsky Suite No. 3, Sonatine, Fancy Free, Estancia, Ballo della Regina and Who Cares?, which she got to dance with her husband, fellow Principal Dancer Robert Fairchild, the star of last year’s big Broadway hit An American In Paris. 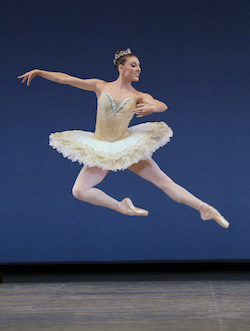 Tiler Peck in ‘Theme and Variations’ from George Balanchine’s ‘Tschaikovsky Suite No. 3’. Photo by Paul Kolnik.

“I think the last time we had performed together had been a year ago, other than a duo we did for Damian Woetzel at The Kennedy Center in D.C.,” she recalls. “So this was so special. I couldn’t have thought of a better way to open the Winter Season than to dance a part that we’ve done so long together, and it’s one of my favorite ballets. I got teary watching him after we danced when he was partnering another girl in a different variation. It was so nice seeing him back on that stage! I’ve gotten to see him so many times in An American In Paris, but it was special to have him back at City Ballet.”

Peck, a native of California, says she looks forward to spring and summer, when her and Fairchild will get to be a part of the new Christopher Wheeldon ballet together and tour to Paris and Saratoga with the company again. They’ll also be returning to Colorado for the Vail International Dance Festival this August.

When asked about her debut role as the Cuckoo in Justin Peck’s brand-new The Most Incredible Thing, she says she loved working with him. “I think it’s really special to have someone so young who gets us and is with us everyday,” she adds. “He knows all of our strengths and weaknesses.” 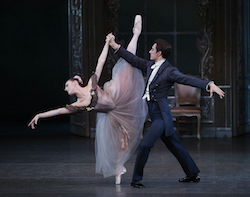 She continues, “Justin grew up in the dorms with me and Robbie at SAB. He was Robbie’s roommate. So it’s been really fun to see him flourish into this amazing choreographer, and I feel like he really uses my musicality. We always joke that he’s always trying to stump me, that he’s trying to find a move that I’ll struggle with. [Laughs.] He pushes his dancers, and I find that there’s a really fun energy in his ballets.”

While participating in the premiere, she was also able to provide feedback to artist Marcel Dzama, who was designing her costume. After removing some of the heaviness, the garment was finalized. “In the end, both me and the costume designer seemed to like it better than the original,” Peck touts.

This knowledge of design comes in part from her experience with Body Wrappers, the dancewear company for which she serves as a spokeswoman and model. In addition to maintaining her busy performance and guesting schedule, she’s been in this role as Body Wrappers ambassador and guest designer since 2012. She’s just finished creating her 47th design. 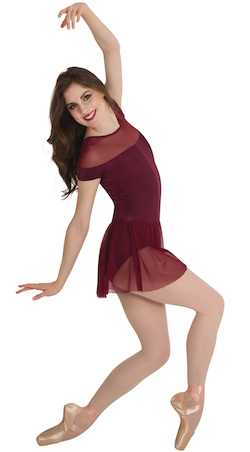 Tiler Peck models one of her designs for Body Wrappers. Style P1205 is an Illusion Neckline Skirted Leotard. Photo by Ryan Boran.

Peck recalls, “I did my first model shoot with them in June 2008. That was just me modeling their leotards, and I could tell we really got along. Trudy Christ [their Marketing and Public Relations Director] later told me, ‘I looked at you and thought that Tiler is like a Hollywood starlet, and I knew you could do so much more than just model.’ So then in 2012, I started as their spokesperson. I started Tiler Peck Designs in 2014.”

While she can’t sketch her designs herself, she often pulls together a Pinterest board of inspiration and works with the Body Wrappers team to formulate her ideas. When asked what inspires her, she says fit and comfort.

“I spend most of my day every day in leotards, so it’s very important to me that I feel feminine, beautiful and comfortable,” she explains. “I’m constantly seeking a fitted leotard that makes me comfortable. I think that’s what others want, too. I don’t want them to look at my leotard on the hanger and say, ‘Oh, that’s the one that annoys me halfway through the day.’ So I think of what I’d want as a dancer.”

One of her latest designs features lace, a fabric that caught her eye in Vail last year when she was performing alongside Dancing With The Stars professional Anna Trebunskaya. Her current favorite design? Perhaps the new Flocked Dots Leotard. 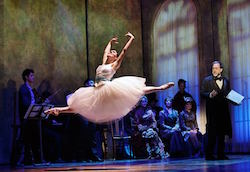 Tiler Peck and company in ‘Little Dancer’ in 2014. Photo by Paul Kolnik.

Peck, who is now enjoying NYCB’s annual week at The John F. Kennedy Center for the Performing Arts through March 6, discloses in our conversation that later this month she’ll be doing a reading in NYC for Little Dancer, the ballet-focused Susan Stroman musical that she starred in at the Center two years ago. The production, which follows the story of a little aspiring ballerina in Paris circa the late 1800s, premiered at the Center in October 2014 to much acclaim and was reportedly bound for Broadway. Peck says that she hopes to star in the musical again if and when it opens on the Great White Way.

With this in the works and some other interesting projects ahead for 2016 and 2017, Peck says she is excited to see how everything unfolds. She’s perhaps most excited, however, that everything’s finally falling into a groove for her and Fairchild after a hectic, but exhilarating, 2015. When asked how she balances everything, from her feverish NYCB schedule to her guest performances and designs, Peck wisely responds that she takes each moment that comes. 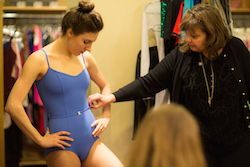 Tiler Peck in a final fitting for her Tiler Peck Designs for Premiere by Body Wrappers.

“I’ve just been trying to take it one day at a time, realizing that these are the best years of my dancing career, and I’m so fortunate that we have the rep that we do and that I’m getting so many opportunities,” she shares.

With a spirit of gratitude and the help of physical therapy, massages, a healthy diet, some due rest and supplements (she swears by these!), Peck is ready for NYCB’s Spring Season, which launches April 19 and runs through May 28. Follow Peck’s regular updates at Body Wrappers’ Tiler Talks Blog at bodywrappers.com/blog/tiler-talks-posts.