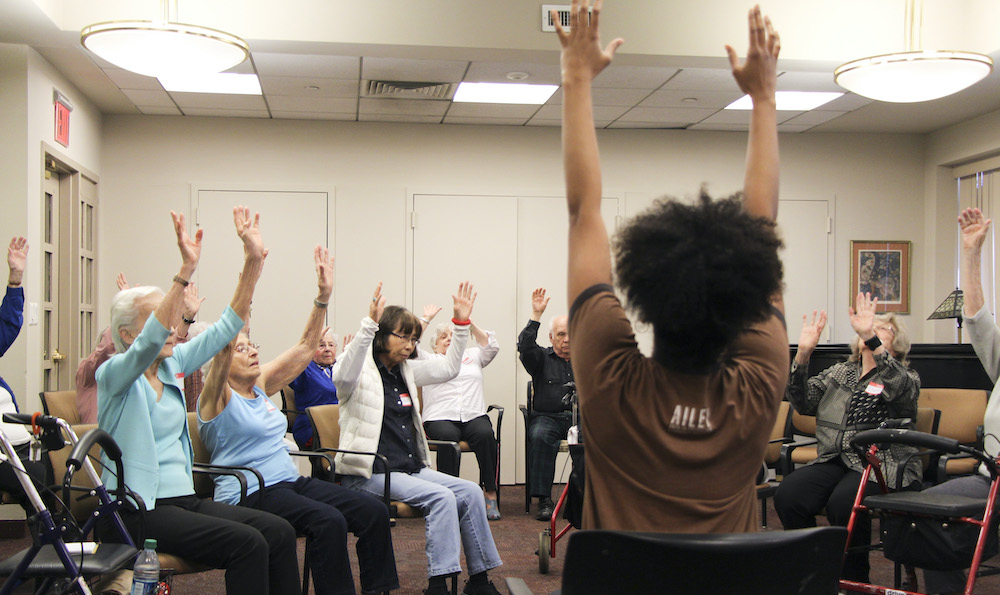 “Dance came from the people and should always be delivered back to the people,” Alvin Ailey said. Alvin Ailey American Dance Theater, a key part (but not all of) his legacy, works by this ethos. “Dance is for everybody,” asserts Cathryn Williams, director of Arts in Education and Community Programs at Alvin Ailey Dance Foundation. Amongst many other programs offering dance across the five boroughs of NYC, her department offers AileyDance for Active Seniors.

Through the initiative, senior citizens across NYC have the opportunity to move for better physical health, boost their brain health, and have a creative and expressive outlet. Dance Informa spoke with Williams and Amos Macahanic Jr., an Ailey Arts in Education and Community Programs teaching artist, Ailey Extension Horton instructor and a former Ailey company member.

Williams explains how the idea for AileyDance for Active Seniors began six years ago as part of a five-year strategic plan for the Ailey organization, developed under the leadership of Ailey Executive Director Bennett Rink. She shares how offerings in the program include movement classes, culminating performances for participants, and opportunities to see live performances of Ailey, Ailey II and The Ailey School’s Professional Division students. Williams emphasizes how with cognitive decline and mental/emotional effects such as loneliness, having a creative outlet is crucial.

Movement can be particularly powerful because even with forgetting details such as dates, “you don’t forget how you feel” and that it can be “profound to express your own stories through movement,” she believes. Machanic emphasizes how senior citizens are often (unintentionally) forgotten in our culture. “It’s so important to give them a voice and a creative outlet,” he believes. He notes that the program’s offerings can give people access to what the company can provide when mobility issues might limit them from visiting the theater.

Willams shares how she gives teachers a framework for the classes but also encourages them to make the classes their own within that framework. In fact, she sees it as their responsibility to “breathe life into” the classes. The framework, which Williams hopes to build into a curriculum, most often consists of a beginning check-in when all participants can share a bit about how they’re doing. Following that is often a verbal prompt for movement, such as “I remember a time when….” Williams recounts a meaningful instance of that prompt leading a participant to share how when very young, her family came to the U.S. through fleeing oppression in Soviet Russia.

Machanic describes using a “word wall,” allowing participants to each throw out a word or words as prompts for movement — such as “what do you think of with the word ‘dance’?” He works with Teaching Artist Heather Bryce, whom Williams says has used poems as movement prompts. Williams also describes “accumulation dance” as a technique that the classes employ, adding participants’ movements on top of one another to make movement phrases.

If participants are independently mobile, tableaus are also possible, she says. Teaching participants about aspects such as levels in space and movement dynamics also adds an educational component that keeps their brains stimulated, key for helping to fight off memory decline, she adds. Williams says that teachers also sometimes show videos of the Alvin Ailey American Dance Theater dancing iconic Ailey pieces such as Revelations and then teach the participants adapted versions of certain sections.

As other ways to keep the classes flowing and beneficial for participants, Machanic explains the importance of “keeping feelers out” for what students would enjoy and what would nurture them. For instance, if a participant says “ragtime” on their “word wall”, he and Bryce might discuss and say, “Let’s bring in ragtime for the warm-up”. He also underscored the importance of being flexible with the format, because classes can go in unexpected directions. To be most effective, the teaching artists need to make adaptations. Machanic also mentioned certain classes are for senior citizens and their caregivers, and some are for caregivers alone. These classes offer meaningful self-care for people who give so much, and need to refresh and refill to keep giving.

Then it comes to culminating performances, which Williams said importantly “validate [participants’] experience” and allow them to share with their family and friends. Machanic added that the performances also create community in assisted living homes, allowing different floors of residents to connect and to share. For him, it’s incredibly meaningful to see this community connect. It’s also special for him to see the growth in his students — physically, mentally, spiritually — from the first class to the performance. He also noted an important atmosphere of “no pressure” sharing, that’s it okay if someone misses a movement. “The goal is to see a light turn on in them — we know that’s the way in,” he affirmed.

What this kind of movement classes offer that fitness classes for seniors can’t seems to be a valid question. Williams believes that apart from the culminating performances and opportunities to see performance (live and via video), they offer the important elements of aesthetic engagement, imagination, emotion, and of narrative and personal story — while still offering the same important physical benefits (increased flexibility, strength, balance, and mobility).

Machanic underscored how these classes also remind all involved how “everyone has something to say,” and gives them a spiritually safe space to do so. In this line of thinking, a senior citizen reaching an arm can be as meaningful as a huge leap from a young, lithe dancer. All of that said, Williams was clear that the approach here stands apart from Dance/Movement Therapy, a formalized clinical field that works with and through set clinical goals as well as theoretical and empirical frameworks.

Several times, Machanic noted the joy and appreciation of participants. He believes that he’s seen them “come alive” and “transform before [his] eyes.” He also described seeing them “lift each other up”, which can be incredibly touching — such as a resident who was a former dancer helping older, less mobile residents. Machanic also described dancers attesting to practicing outside of classes, demonstrating the classes reaching far beyond the time they are held in participants’ lives. Williams recounted striking instances of the classes’ physical benefits such as a participant recovering from an operation far faster than her doctor would have thought.

In a longer-range vision, Williams would love to bring the classes to senior citizens in cities where the company tours, through residencies. Wherever it all goes, AileyDance for Active Seniors, under the umbrella of Arts In Education and Community Programs, is a key component of bringing dance back to the people — as Ailey believed, after all, it came from them. It lives in all of us, however young or old.

For more information on AileyDance for Active Seniors, head to www.alvinailey.org/about/arts-education-community-programs/aileydance-active-seniors.