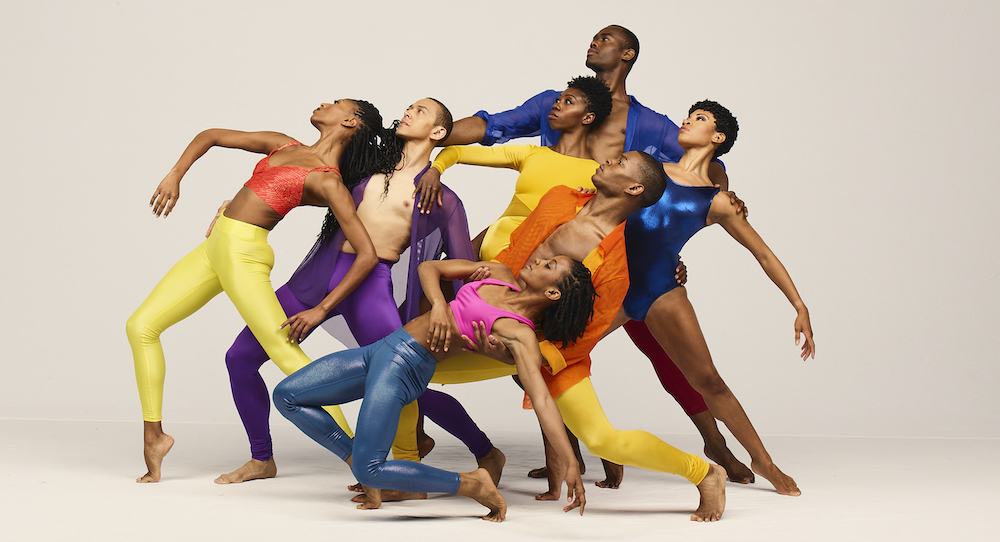 Sophisticated, thoughtful dance art — and programming of its presentation — can take audience members through various moods, atmospheres, and even worlds in just one night of dance. Alvin Ailey American Dance Theater’s fall program at New York City Center, a triple-bill, was such dance art and programming. Through adept choreography, concept and design, it underscored how society — and African-American culture and history, in particular — holds both celebration and mourning, joy and the resonances of trauma. In just short of two hours of dance art, I felt revitalized, saddened, intrigued, spellbound and more.

The first work, Alvin Aliey’s Night Creature (1974), felt like a jazzed-up version of Hollywood “dream ballet” (from its “golden days” of old). Movement vocabulary went from balletic to that of classical jazz to that of twentieth-century modern dance. Certain moments oozed, such as deepening into a plie or extending through a leg. Others popped, such as hands coming to hips and hips articulating. Little balletic jumps and leaps added an organizing classical framing to all of the action. There was also a consistent hum of high energy and action — swiftly-changing formations, partnering switching, varying the speed of movement. The result of these components was a multiplicity that pulled me right in. At times, however, I did want to see some moments linger more – to truly take in their flavor and feel.

On the other hand, the way groups shifted and changed intrigued me on a conceptual level; it was as if the work was spotlighting different groups within a larger group gathered for nighttime fun (as the title, jazz music and elegance of the costumes would lead me to think). Within a larger social setting, there are many smaller social encounters that play out — jokes, dramas, flirtations, et cetera. How interesting and pleasing to see this played out in choreography!

Costumes were an off white and blue, their sequins also sparkling bright and far (recreated by Barbara Forbes). The score, from Duke Ellington, had a bright and vivacious quality that supported that quality in the rest of the work. Classic jazz elements also added a heartwarming nostalgic feel. All of it felt joyous and lively. The work reminded me that even in troubling times, those of past and present, art as catharsis and diversion has its sincere, important place and purpose. It can shine a light through the darkness and remind us of that light’s wonder.

Following Night Creature was Robert Battle’s duet Ella (2008, Ailey premiere 2016). Renaldo Maurice and Chalvar Monteiro danced the work with skill and joy. The work exhibited many elements of the Artistic Director’s choreographic voice — such as quick movement and gesture aligning with musical beats — yet also offered a new mood and atmosphere.

The two men moved along with the multifaceted tones of Ella Fitzgerald’s voice, singing choruses and other signature parts of classic songs. In the dips, trills, and runs of Fitzgerald’s incomparable vocalizations, the duet partners found unique gestures, alterations of classic technique, and timings. Their maroon and black suits, sparkly and sharp, added further elegance to all of this (designed by Jon Taylor) — to which the dancers’ chic presence fully aligned.

I did wonder if a bit less unison would vary up the work further; the duet partners moved in total synchronicity for most of the work. There was one enticing, memorable moment when one danced leaned closer to the other, separated a bit in space, and the other leaned away — a bit of a “chase”, if you will, and play with “negative space” (the spacial and energetic realm on stage wherein the dancers weren’t). Later, I checked my own reaction here to wonder if it was a more theoretical, academic response than one of my authentic experience of the work. In truth, the work pulled me in and made me smile — even laugh at times.

The work’s brevity was also refreshing. As it wound down, I thought to myself “just enough”. Also with a highly energetic quality, the work truly packed a punch and left an impression. To end, the dancers flopped in an “x” shape on the stage, laying still as the music continued to play for a moment before dimming down. This choice added a different timing quality. I also laughed to see this extreme embodiment of their exhaustion (which, if authentic, would be understandable — performing the work seemed to require boatloads of physical, mental, and spiritual energy).

Then came Donald Byrd’s Greenwood (2019), bringing us into a totally different world, atmosphere, and mood. From the work’s start, the accompanying effects of smoke and green lighting brought the feeling of something not quite right. Red lighting at other points brought a feeling of intensity (lighting by Jack Mehler). A group wore somewhat old-fashioned clothing (from the 1920’s, seemingly) and danced together in harmony — hopeful yet cautious, expansive yet at times moving with more restraint. Soon enough, a woman’s scream rang through the theater. Chrome-wearing figures then entered (costumes by Doris Black). These figures moved in lines, and soon ominously close to those who were dancing together in harmony. There was an eerie sense of routinization and conformity, and then something parasitic, in the way that they moved.

The score also become atonal and foreboding (music by Emmanuel Witzthum). It seemed clear that these chrome-wearing figures were not here to help — in fact, their goal seemed to be to harm these everyday-people sort of characters. They marched out through an opening in the backdrop. An “everyday-people” dancer then ran in place, evoking the sense of exerting significant effort while getting nowhere — or perhaps running from a threatening force, but getting nowhere fast. In different variations, with different discrete parts lengthened or shortened and movement themes expanded upon, this sequence repeated. This repetition brought a sense of just about the same thing happening over and over again — history perhaps not exactly repeating, but for sure rhyming.

A duet that went from passionate to contemptuous brought me into these dancers’ world — real people with joys and sorrows, even apart from the exploitation and oppression that these chrome-outfitted figures intermittently brought. I thought back to the program’s discussion of Greenwood as the “Black Wall Street” — until white resentment of African American excellence, and a spark of an interracial encounter between two teenagers, led to a literal race massacre at Greenwood. My heart sunk, and my mind spun back into my occasional meditations on the white privilege of myself and my loved ones. More than mentally, I truly felt these themes — into my bones and deep into my soul.

I reflected on art’s power to make us more than think, but to truly feel. I also found it remarkable that right after the joyous and vivacious Night Creature and Ella, a very different work brought me to this reflective place. Art can show us at our best, but also at our lowest points. It can illustrate our highest joys and our deepest sorrows. I thought about that dynamic at a community level, as well — and particularly within the African American community. With all that their community has had to overcome, Black artists have undeniably been leaders in national, and international, art and culture — and Alvin Ailey American Dance Theater is at the forefront of that leadership. Brava, and sincere gratitude, to these artists for their leadership.