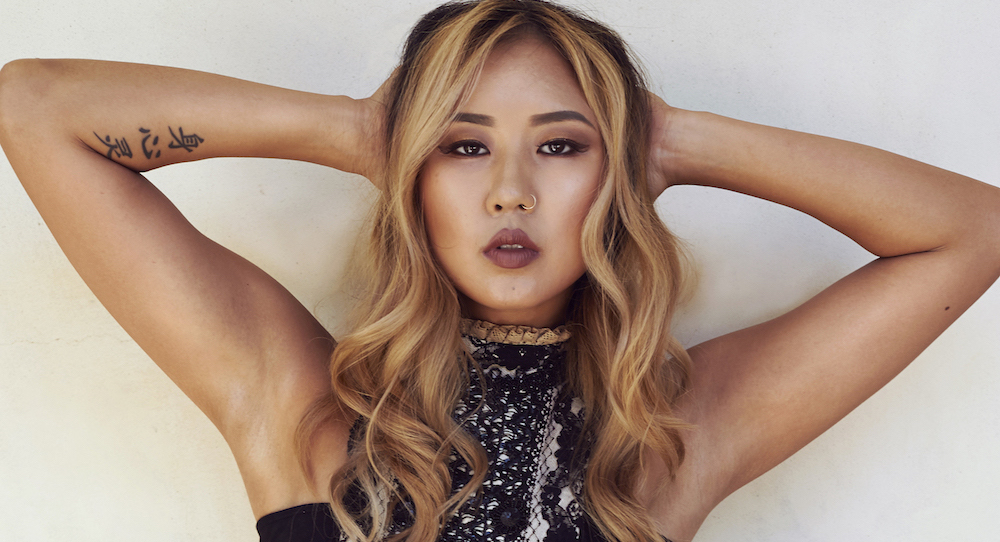 Canadian dancer Winnie Chang officially relocated to Los Angeles five years ago on an Artist Visa. Since then, she has found success, dancing for various pop stars and traveling the world with major singers. More recently, Chang could be seen on TV screens nationwide performing alongside Demi Lovato at the 2017 American Music Awards on November 19. Here, this fierce dancer shares her journey with Dance Informa.

How did you first began dancing? 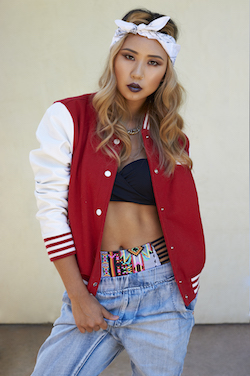 “I started dancing when I was six years old. My mom had taken me to this annual park festival in our hometown (London, Ontario), where there was face painting, food, games and all that good stuff. While we were there, a dance studio was putting on a dance performance, and my mom told me that as soon as they were finished, I told her that I wanted to do what they were doing. The next thing you know, my mom had enrolled me to be part of the competitive team at that same studio, Laurie-Ann’s School of Dance. I competed in ballet, tap, jazz and lyrical numbers, but my strongest style growing up was always tap.”

Following your time at Laurie-Ann’s School of Dance, where did you further your training?

“I trained and competed at Laurie-Ann’s until I was 12 years old and ended up moving to Mississauga, Ontario, where I started training at Canadian Dance Company. There, I continued the same styles of dance, including pointe. I competed with them until I was just about to turn 16 but ended up quitting because, unfortunately, it was becoming difficult to afford. So I quit dancing from 2007-2009, but for the beginning of 2009, I danced with this hip hop/contemporary group in Toronto on Saturdays, just for enjoyment.

I moved to Vancouver, BC, for university the following fall and was accepted into the Source Dance Company, which focused on contemporary, ballet and some commercial hip hop. After I finished the year with Source, I spent my next year training with SOULdiers, which was a company that focused on hip hop, breaking, popping, locking and house.

While in this company, I also joined TwoFourSeven, another more community-based company and also took a few trips to L.A. to experience the dance scene. It was during this busy year that I realized that although I love dancing and performing in general, my soul resonated with funk styles. To this day, I continue my training in L.A. whenever I’m not working!”

At what point did you know that you were going to pursue dancing as a career?

“I saw my first underground dance battle in Vancouver in the winter of 2009. I watched people express themselves so creatively and passionately in ways I hadn’t seen before. I had been so accustomed to just watching choreographed routines in competition or on TV shows, that seeing people freestyle so beautifully in a friendly battle setting was just mind blowing. It was so inspiring and exciting to watch, and it filled me with so much joy. It was during that dance battle I decided I wanted to dance for the rest of my life.”

Specifically what brought you to L.A. five years ago?

“Throughout 2010-2011, I took a few trips to L.A. to train. On one of those trips, I decided to just audition for a new agency that was starting, just to practice. It went well, but they had told us that if we didn’t hear within two weeks to just try again next time. I went back to Vancouver and didn’t hear within the time frame, so I continued to live my life and train. Two months later I get a phone call from an unknown number. It ends up being Lisa Lindholm from the newly found Go2Talent Agency calling me to tell me that she had been desperately trying to reach me for two months to sign me! I was in such a state of shock!

My first audition for an agency and she still tried to reach me after two months of no response – this must be a sign that this is what I am meant to do. After learning that being signed to an agency was the first step to getting a Visa and that my dream of dancing for artists could really be real, I decided that moving to L.A. was a must.”

Speaking of your Artist Visa, how hard was it to secure? For other artists in Canada considering moving to L.A., what’s one piece of advice you want to give?

“I was actually pretty lucky with my Visa. I had been on a six-month job in China, where I met Jesse Lee Santos. He saw the potential in me and believed in my talent so much that he was willing to help me with my Visa process. With his help and the help of my mentors from the dance companies I trained with, my Visa was approved in nine days!

I don’t think there are any tricks or easy ways to secure a Visa, but I do strongly believe that with really great work ethic and passion, and if you train your butt off, your talent and star quality will be seen and the universe will guide you on a path of living your dream! That’s what I did!” 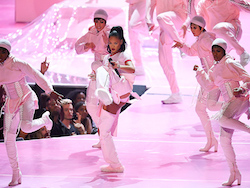 At this point in your career, you’ve danced with some major stars. First off, what was it like dancing on the ANTI World Tour with Rihanna for 2016?

“Oh my God, dancing with Rihanna on her world tour still feels like a dream. It was my biggest dream! I think that dancing for her is exactly what you imagine. She’s such a rockstar, but so cool and down to earth. It was an honor to rock it out on stage with her and the amazing cast I was with, that we all see as family. I’ve always been a huge fan of all her music, and I think she has so many vibes and essences to her that the choreography is always fresh and exciting to perform.”

Who were the choreographers for Rihanna’s tour, and how long did you have to learn their material?

“Hi Hat, Calvit Hodge, Tanisha Scott, Parris Goebel and Alex Mugler all choreographed numbers for the tour. Our rehearsals would be eight-plus hours every day (minus a day off here and there) for about one-and-a-half months. There were a lot of changes that would constantly be made to really perfect the exact vibe Rih was looking for.

We also tried aerial work for one-and-a-half weeks, which was tough and grueling, but it didn’t end up making the cut. Overall, rehearsals were great because I’m dancing for Rihanna and because I had great people with me!”

Of the various sets and songs you performed to, which ANTI World Tour piece was your favorite to perform, and why?

“My favorite piece is ‘Bitch Better Have My Money!’ I love the song, I love the vibe and the attitude of the song and dance and you just feel so cool! Not to mention it was choreographed by Calvit Hodge, who is one of my most favorite choreographers and teachers whom I have had the luxury of learning from on the regular. His swag and style is just always so different and perfect for everything he creates to! I love my big brother!”

This year you’ve also danced with Beyoncé at the Grammys. What was this casting call like? What was it like dancing with Queen B herself?

“I actually ended up doing the Beyoncé Grammys through the recommendation of a close friend! I’m so thankful that all my hard work has brought me to a point that others will recommend me for such amazing opportunities.

Working with Beyoncé is an amazing process. She is the queen of perfection and working hard, and it’s so inspiring to be part of a process where every little detail is accounted for. There is always lots of workshopping of ideas and styles to get exactly the right vision, and I love that! I have so much love and respect for her and her whole team!”

How long were your rehearsals with Beyoncé, and what were your major takeaways from that experience?

“Rehearsals would be six days a week for a little over a month. Rehearsal days could range from eight to 10-plus hours, depending on the day and what was being worked on. I don’t think I can specify any takeaways in particular! The job was just so amazing to be part of! Beyoncé, her genius creative team and all of her strong and talented ladies that were part of the cast were just so inspiring to be around and learn from!”

Now you’re a seasoned ‘veteran’ who’s dancing on Katy Perry’s Witness the World Tour. Can you tell us more about your roles in this show and why performing for Katy is so fun?

“I’m now one of eight girls who dance for Katy on her tour. Performing with her is so fun because it lets me live in a completely different world that she and her team have created. Her show is full of big and bold ideas, including giant dice that we dance in and out of, a flying beam, a matrix stage and many more. I’ve never experienced a job yet where I got to work with so many new elements and play so many characters so it was definitely exciting to be part of this! I also just love how much fun she likes to have on stage with us and her fans!” 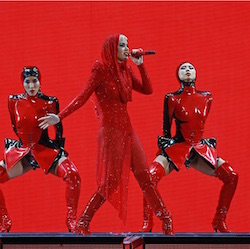 Finally, I believe you also just performed in the AMAs on Sunday. How’d it go?

“Yes! I performed for Demi Lovato for her single, ‘Sorry, not sorry’. It was amazing! It was choreographed by JoJo Gomez as well as Calvit — we already know how much I love him — so it was exciting to dance this gig while on my week break from tour!

Demi is such a talented artist, and I believe she has such strong positive messages for the world, so it was an honor to be part of this performance that meant so much to her and people around the world!”

What are some goals you have for your future career? Commercial dance is a diverse melting pot of opportunities. What are some projects you’d like to work on down the road?

“My favorite thing to do is tour, so I definitely would like to continue touring with artists I love. I love being on stage and performing for thousands of people, feeding off their energy and traveling the world. There is no feeling that compares to it! I’d love to dance for Rih and Beyoncé again, but I’d also love to dance for Missy Elliott and Chris Brown one day as well!

I think being part of a commercial campaign, like the Kia hamsters or those old iPod commercials, would be really cool as well. Oh! And I’ve always wanted to be part of a motion capture job for animation, video games and CGI! Being part of the next major feature film with dance like La La Land would also be a dream. I guess I have a lot of dreams that are still in the making!”

To keep up with Winnie Chang, follow her on Instagram @winni3ta, or stay tuned to her casting page.