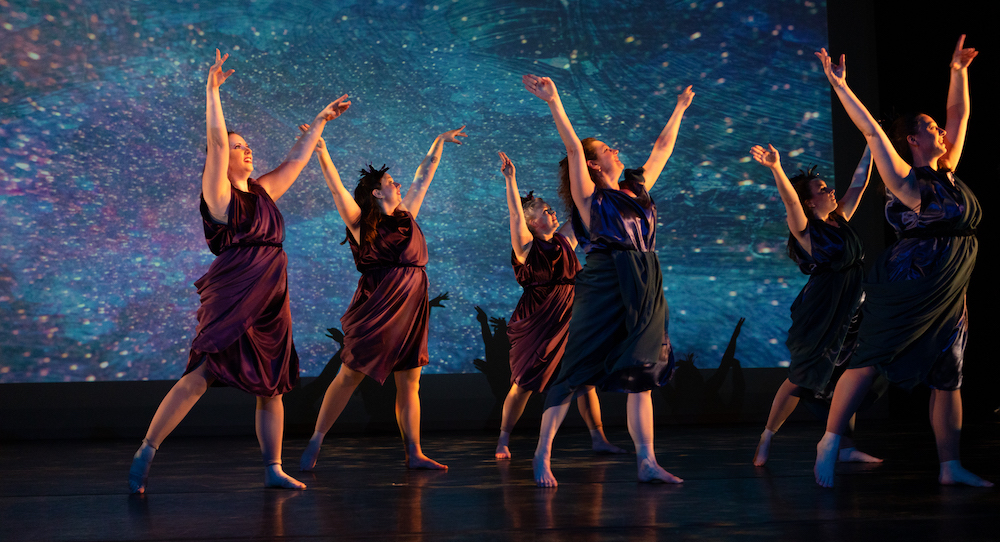 Boston University Dance Theater (and via onstagedanceco.com).
May 7, 2022.

Boston-based OnStage Dance Company always offers a smorgasbord of styles and artistic approaches in its bi-annual shows, with various choreographers contributing work and a large cast performing. The company’s Season 22 Performance was no exception to that trend; the program was arguably the peak of the company’s stylistic and artistic multiplicity.

Even more special was that it was the company’s return to a fully live and in-person show, having presented virtual programs of dance films since 2020. Yet, dance films were part of this program as well, and the company also made it virtually available for several weeks following the live show (how yours truly enjoyed the show) – adding further layers of kaleidoscopic multiplicity.

Those “COVID dance” approaches also stood as signs of what concert dance can be as COVID fades and becomes endemic (rather than a pandemic) in our society: concert dance in that world at its most accessible, and within which all audience members can find their own little treasures and wonders. Also notable in the program was an approach of clear, precise simplicity over athletic virtuosity, which seemed to greatly serve the works at hand (“keep it simple, stupid,” as the saying goes).

Willkommen, choreographed by Jennifer Kuhnberg and set to the number from the classic musical Cabaret, opened the show. Right from curtains up, it brought to life the classic show’s tastefully seedy, playfully sultry atmosphere. Under lighting of an old-fashioned night club (lighting from Mark Fortunato), dancers wore white bloomers and black lingerie. The large ensemble filled the stage with joyful energy. Movement was classic jazz, Fosse style – with small gestures and joint articulations creating aesthetic force and characterization.

Such stylistic flourishes towered over flashy technique and tricks. The piece did include big kicks, turns and reaches – but virtuosity more so shined from the stage in the ensemble’s presence, style and accuracy of shaping and musicality. With all of those aspects, these dancers were right on point. This being the program’s opener, I also wondered if this was setting the tone for the program to come; would it be, overall, carefree and plain fun? I daresay that such a mood is something that we could all certainly use these days!

Coming ninth in the program was another fun, vivacious musical theater number Candy Store (by Rebecca Graber), from Heathers the Musical. This piece even had characters that were pantomiming speech, wearing short skirts and giving off a teenage “ugh, as if” mood. As a tap piece, the ensemble executed clean sounds and formations – with rhythms and transitions across the stage going for precision and clarity rather than for anything overly complex. That can be what it can take to keep a large tap ensemble sounding and looking clean, so that’s arguably quite a wise approach!

Another interesting trend – another strand of colorful pixels in the kaleidoscope of this show, if you will – were pieces with a “flower child”, 1960s and ’70s atmosphere. The first of these pieces came third in the program, Ziggy by Melissa deFriesse, set to a group of David Bowie songs. Building right from lights up was stylish 1970s vibe, countercultural but also classy.

The movement was in classic jazz idiom, precise but not overly technical – as with many (if not all) pieces in the program, style and presence dominant over flashy virtuosity. In the same way, formations of lines and circles were clear and well organized – and even supported a ’70s ethos of continuance and unity.

To end, the dancers reached toward the audience for a few breaths – as if to ask what’s your vibe, will you be countercultural but also classy? Such endings that leave an open question to audiences allow a work to resonate far past when they end – and I know that this work did that for me!

Another 1970s atmosphere came with Come Together by Alexa Romancewicz, coming 10th in the program. Set to The Beatles’ iconic song of the same name, the piece had a similar ’70s countercultural-but-classy vibe. Supporting that was a very “flower child” psychedelic projection on the backdrop, with bold shapes and colors moving in all sorts of patterns.

In movement, thrashing and big expansive shapes embodied that free “flower child” spirit. Contemporary movement vocabulary had a lifted, energetic and self-assured bearing. Romancewicz created clever formations and ways of keeping the movement multifaceted, but cohesive within the group – and the ensemble executed all of that commendably. To end the work, they grooved off with a free-spirited, but dignified energy.

Also in that vein of a contemporary movement idiom meeting a unique concept was Susan Oziemblewski’s Turn the Light, coming fourth in the program. Projection of stars and other celestial bodies filled the backdrop, and the score described gazing upon the stars in joyful awe. The ensemble wore Isadora Duncan-esque Grecian robes, in colors of the deep night sky. The movement also had a Duncan-esque ease and kinetic honesty.

Movement was also not overly complex, but quite pleasing – particularly is it came together in formation. Again, keeping it simple in a larger group can help keep it all clean and precise. Additionally, there can be more visual interest and complexity at hand than one might at first think! In an even deeper way, such beautiful simplicity reinforced what we can feel in moments of awe – speechless, with words failing to do justice to what we’re currently experiencing.

The last stylistic approach in the program to note was, as mentioned, dance films. Most were in a contemporary movement vocabulary, but each had their own lane under that overall movement language umbrella. Andres Calderon/dresticHaus contributed videography and film editing.

Second in the program came Catherine Shortliffe’s contemporary dance film, My Oh My. Shortliffe built an almost spartan atmosphere, one that allowed the soulful, well-constructed movement to take full focus. The film took place outdoors, yet the setting had manicured landscaping that evinced a suburban setting. The ensemble of four dancers wore knee-length and long-sleeved black dresses. Their movement was precise yet soft – dancers stirring those qualities together for a wonderful overall movement quality.

An expressive voice in the score, as well as a statue off to the side, brought something spiritual or existential to mind. The dancers met that sense with their thoughtful, authentic presence. All of this brought to mind a sort of modern Emily Dickinson atmosphere: a reflective, sometimes morose mood and existential comportment for a modern suburban setting. Whatever it was, it was something all its own – and also pleasing and memorable.

In terms of structure, short solos in the beginning shifted into duets, and then ultimately eye-catching formations with the four. I was intrigued to think of how the idea of the individual and collective fit in with the spirituality and existentialism at hand. The film even ended in that mysterious, even haunting Dickinson-ian atmosphere, with the dancers fading away until they could no longer be seen. A million questions could arise from this choice – of the nature of a soul and beyond – yet the aesthetic and energetic offerings at hand were also more than enough to draw me in and leave me wanting even more.

Coming 11th in the program was Satellite, another pensive film and another work from Kuhnberg. The singing in the score was wonderfully expressive, and the ensemble met that in their performance quality. I could see their pants wet from rolling right on dewey ground – and there was a striking sincerity to that. The same qualities were in how they gently lifted each other in partnering and ran into the woods together with easy smiles.

Overall, their thoughtful and honest presence illustrated the thoughtfulness and honesty that nature, as well as truly being in our bodies, can draw up in us. To end, they looked up to the sky, as if overcome by the wonder of being in their bodies, in the gifts of the natural world. If it might resonate, one could also imagine that they were receiving grace from above.

Coming second-to-last in the program was a work that combined film and live dance – Mykala Marcelino’s Purse First. It began with a compilation video on the history of vogue and how the style developed, which was a great way to educate audiences as well as to acknowledge the creators of the form (largely LGBTQ+ people of color).

Then we shifted into the piece – with no-holds-barred in costuming, movement, and presence, all of it sassy and daring. The dancers executed the clear posing and fun sultriness of vogueing. In the “purse first” theme, they each held their own purse, and used it to reach out into the space as well as fan themselves – making it a fun organizing principle for movement.

As a last film in the program, a compilation video on OnStage itself followed that last piece. In short interviews, dancers shared what the company has meant to them: the community at hand, what it means to be able to perform in adulthood, the opportunity to be creative and to have that outlet. This film ended with the large cast bowing together – the Onstage community, which dancers in the company had just fondly described, right before our eyes.

That final bow led to an energetic finale with the entire (and large) cast, with dancers wearing logo shirts and black pants. Performers had chances to dance individually as well as in group sections – and there was even a short tap section! As always, with this as an OnStage tradition, the finale was a lovely way for the cast to have a moment to revel in all of their hard work and for the audience to join them in that joy.

All of that would be as different for every dancer and each audience member as they as individuals are, just as colorfully kaleidoscopic and versatile as the program itself. Even in that diversity of aesthetic and meaning, simplicity shown through and made it all even more satisfying. Those are all examples of how dance can move forward from here, moving through the hardships and loss of COVID into a new world of – granted, that world challenging and different in its own way – learning, creating, and sharing.