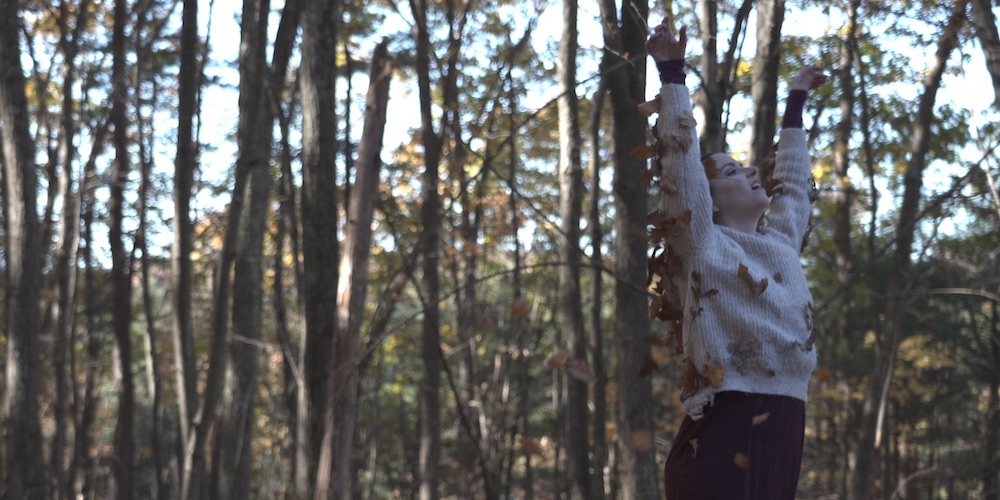 We all know and love a good “behind-the-scenes” segment – or we know it, in the sense of being familiar. As a reviewer in the age of COVID, it’s been fascinating to see how choreographers and companies have gotten creative and increasingly skilled with the medium of dance on film (one which many have turned to for practicality and safety of all involved).

One of those adaptations, for many companies – and Greater Boston-based OnStage Dance Company in particular – has been intriguing and informative “behind-the-scenes” interviews and video segments to accompany dance films. These segments, right along with the dance films themselves, have gotten increasingly well-crafted and absorbing to experience over the three virtual seasons that this company has presented: culminating in January 2022’s Season 21 program.

These offerings gave insights into concept and creative process, from the artists themselves — in ways that I’ve not seen much (by and large, with some exceptions) with live dance. They therein offered audience members more assured footholds into understanding and appreciation of each work. Beyond that, these segments provided a window into these artists as creators and as people – making the work all the more intriguing and human.

As always with this company, Season 21 dance films also reflected that individuality and diversity of vision, aesthetic interest, stylistic strength and artistic approach. The result was a multifaceted program with something fully new to enjoy with each work: something new, but always honest and authentic. This review highlights the ones that were most impactful and memorable for me personally, although all of the works were that to some degree, in their own ways.

Opening the program was OnStage Director Jennifer Kuhnberg’s Get Ready. She described it as embodying the power within femininity, and also more “hard hitting” jazz than she often choreographs (so this was an intriguing departure for her, she noted). Indeed, the movement was very geometric and accented, with clean lines and other shaping true to classic jazz form – something, in truth, that’s seen less and less these days.

The ensemble danced on a dimly-lit black box stage (lighting design by Lynda Rieman), which smoothly aligned with their black and white costuming. In business casual, they embodied simple elegance and the power of a confident female leader, in or out of business. Enhancing all of that were sophisticated effects like the dancers throwing their jackets over one shoulder in slow-motion — like a professional leader who’s just closed the deal, filed that big story or made their next entrepreneurial move (videography and editing by Andres Calderon/dresticHaus).

As is not always the case with this dance style, there was nothing overtly sultry or sexualized – other than prideful carriage of their bodies just as they are. The ensemble made clear that the physical is nowhere near the only place where feminine power lies, but a lot of it can rest there, too. To end, the ensemble formed a tableau — illustrating them as unique individuals, yet also joined in their grounded strength, and through that being more than the sum of their parts.

Following that was Amy Foley’s A Hard Rain’s Gonna Fall, which she described as “tangentially about nature.” One could find within it an honoring of nature but also something simply harmonious, beautiful and simply calming. The work was a smooth montage of outdoor solo dances, in various natural settings.

The various movers danced in a released, yet shaped and supported, way. The camera shot switched between them often, and I did wonder what the effect of staying on one or more of them for longer might have been. As it was, however, there was something thrilling about these frequent editing cuts.

There was also something Isadora Duncan about the dancers’ easy flowing clothing and bare feet, socks or sneakers with close contact to the earth, but – most of all – their movement full of honest honoring of their body’s inclinations. Just as I imagine of Duncan and her proteges, they also had no fear of getting dirty or messy; they danced right on and in the leaf cover on the grassy ground.

Later in the work, the shot seamlessly transitioned such that one dancer seemed to continue or complete the movement of another. To end, the whole ensemble joined in the same movement, in canon, each of them executing that movement in their own time. These filming approaches (videography and editing by Jennifer Kuhnberg and Andres Calderon/dresticHaus) made the work all the more pleasing and memorable – all the more so with this being a time when our connections to each other and the outdoors are often on our mind.

Andrea Unzueta Martinez’s The Dance of the Oyster Microbes came fourth in the program. Although it did take a moment to grab me as such, guiding the work was a wonderfully inventive concept as well as an approach to bringing that concept to life. In her introduction to the work, Unzueta Martinez explained that the piece was a sharing through dance of her PhD research on marine life – and that the work was also infused with her Colombian heritage.

Composing the film were different groupings of dancers as well as shots of ocean and river scenes, with text across the screen for context (including aspects of Unzueta Martinez’s research) throughout. There was also vibrant Latin American styling throughout the work — in costuming, music and movement vocabulary (along with jazz, hip hop and other social dance elements).

All of these elements came together cohesively for quite an enjoyable final product. More special even than that was how Unzueta Martinez shaped the work through these personal and treasured parts of her – sharing them with us to share key aspects of herself as a researcher, artist and woman.

Coming eighth in the program was Teresa Fardella’s Suspiria, in an atmosphere quite unique within this program, delightfully spooky and creepy. Fardella explained how she started with a single movement phrase and “saw how witchy [the ensemble] could be,” all in a quest to create a horror movie-type feel. The narrative of this “horror film” was a woman getting lost in the woods and meeting these witches. Would they draw her into their witchy ways? Audience members could imagine that for themselves, creating a “movie” in their own mind.

That movement phrase did appear throughout the work: full of releases of the torso, an expansive arm pathway, and extensions with a gently bent knee (“attitude” in dance terminology) – nothing overly complex, but effective in its clarity. Formations of circles, with characters slowly raising their arms, as if honoring the spirits of the forest, were all quite classic “witchy.” In any case, the work felt more about atmosphere, aesthetic, and character presence than about movement (even while that was an indispensable piece of the puzzle).

In her introduction, Fardella described how she’s at times found working with film aesthetic and design effects challenging, but all of that actually came off quite strong in this work (sometimes we’re our own harshest critics, as the very true cliche goes!). She did create the effective horror movie feel that she had shared that she wanted to create, it all coming together in a unified, satisfying way. Fardella provided editing, Alex Drumm videography and Lynda Rieman lighting.

Coming after that was Catherine Shortliffe’s piece Avalon. In her introduction, Shortliffe shared that she enjoys possibilities of film: such as choices of film angles and which dancers are in the shot. Shortliffe also noted that the work is lyric-driven, and how those words connect with where we are now. In that sense, the work was “definitely a pandemic piece” – but one about joy, reunion and a hopeful future rather than anything despondent.

We all have our (often heavy and hard) thoughts and feelings about the present state of the world, still mired in a pandemic. Shortliffe offered hers through the art of dance – and in so doing offered something wonderfully uplifting.

The work’s atmosphere, aesthetic, and sensory melange immediately pulled me in. The ensemble joined outdoors (something that we’re quite familiar with), with an expansive natural landscape behind them (at the Fruitlands Museum in Harvard, MA). A road beside them brought to mind passage, progression, a journey. They wore white dresses: conveying purity, a blank slate, a fresh state. Combined with these elements, the score (Avalon by Rhiannon Giddens and Francesco Turrisi) infused, in a heartwarming way, an Appalachia feel: Americana!

The dancers offered to the camera movement somewhat internal, yet also generous and joyful – as if they were relishing in how good it feels to have it in and through their bodies. Taking small steps, turns, and upward reaches, they repeated a pleasant movement phrase. That repetition worked in the sense of this piece: of life going on, ongoing support of people in your life, and the satisfaction of your daily work despite the existence of current hardship.

Contrasting these outdoor shots against that expansive landscape were moments of dancers, in smaller groups, indoors and traveling road in the woods (videography and editing by Andres Calderon/dresticHaus). Such variance is often necessary for a fully dynamic aesthetic presentation. That structural choice also spoke to Shortliffe’s stated interest in all of the possibilities within film shots. In the end, the dancers all faced each other in a circle and slowly lowered their arms – an exquisite moment that felt like giving, receiving, and an opening to community and human connection.

A very fun and vibrant finale closed out the program: with different groups of performers dancing in different styles, spotlight moments for each choreographer, and sections of everyone simply dance-partying. Loudly and proudly, the song proclaimed “we don’t need permission to dance!” – indeed, we don’t! As these artists’ personal and creative sharings underscored, we don’t need permission to create things that are aligned with who we authentically are.

COVID has taken a lot from us, but it’s also given us some valuable things: including exploration of new media for dance art (whether or not we’ve been forced into those new approaches), as well as encouragement to reassess how we connect with others as well as with ourselves. Human stories, like those within OnStage Dance Company’s Season 21, can lead us on those sorts of reflections with surer footing. COVID has taught us one thing for sure, I’d argue: a human focus is truly something to hold onto.