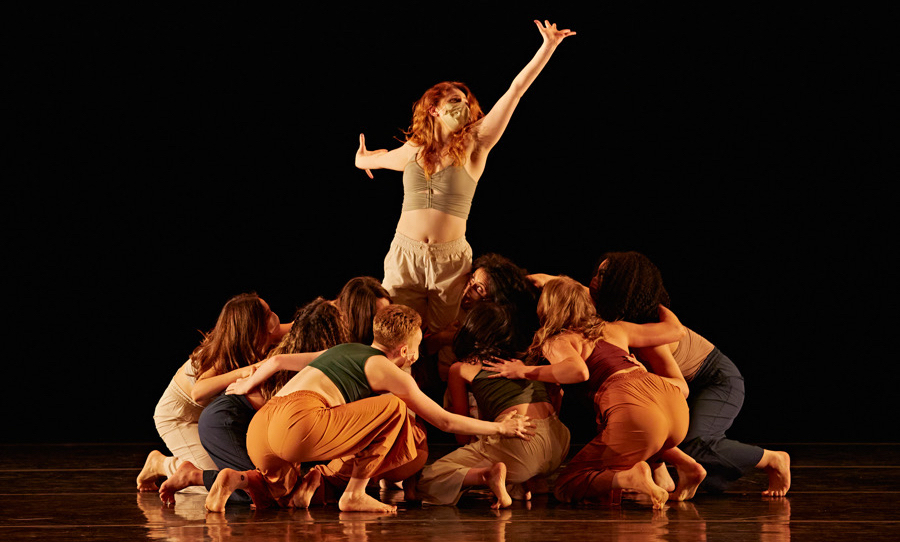 Generation Z is rejecting a whole lot of what (they think) doesn’t serve them and the world. Although it’s of course no kind of scientific sample, the 11th Young Choreographer’s Festival (YCF) — featuring emerging choreographers from ages 18-25 – demonstrated how this next generation of dancemakers is rejecting boundaries of genre, structure, guiding concept and more. The “kids are all right,” as the saying goes!

That’s also aligned with where we are, more generally, in this post-postmodern era of concert dance, wherein just about all influences of technique and craft are fair game. Yet, these young choreographers thoughtfully realized their own bold and eclectic visions, apart from any prevailing trends out there – and in so doing demonstrated impressive artistic maturity, as well as honest commitment to themselves as creators. Also special was that with this year’s program, YCF returned to Symphony Space after a two-year hiatus due to COVID.

KC Castellano‘s Braving the Storm kicked off the program — a notably dynamic and poignant work on reaching and ascending, and helping those in community with you do the same. Movement was athletic and full of courageous momentum. Daring lifts conveyed the sense of supporting others’ rise, and a ladder became a tangible touchpoint for that sense of rising. Mumford and Sons’ “After the Storms” accompanied the dancers: “know you’re not alone, I’m gonna make this place your home.”

Experiencing this work, I found myself tearing up – and that, in all honesty, is not something that happens to me often when watching dance (I’m working on feeling a bit more and being a bit less analytical!). That says something about the honesty and deep meaning of what Castellano offered here.

Following Castellano’s piece was YCF Founder and Director Emily Bufferd’s i think i am, from BEings Dance and performed by Danie Kurzman: an edgy, yet classy exhibit A of stylistic eclectism. Movement, as well as how Kurzman performed it, was supple yet steadfast. In another compelling binary, a somewhat angsty atmosphere contrasted reaches and a heart lifted in a physicality of hope. All of this felt truthful to the experience of bittersweetness – light and dark dancing with each other in our hearts, minds, and souls.

Andrea Saum’s theatrical and hip Hotel California came next. Musical theater dance is getting more eclectic, and also more often calling upon contemporary dance. This work reflected that, offering a narrative – without being overly literal or forced – in stylistically-eclectic contemporary dance. Set to the classic rock ballad by The Eagles of the same name, the work also built a nightlife vibe of earlier decades, infused with California cool.

The large ensemble filled the stage, like a group of energetic young people filling a nightclub on a steamy summer night. Formations were fresh, lifts were daring and movement vocabulary – with influences from ballroom dance to hip hop to classic jazz – was vibrant. All of that brought to life a “boy meets girl” story, yet one not at all cliche. Specificity created something universal; these young people could be any of us at that time of life, experiencing similar nights of budding romance, heartbreak, and simply enjoying who we are and where we are in life.

Devon Custalow’s His Beautiful Succubus brought quite a different energy to the stage – less of a narrative and more of an atmosphere of ease and thoughtfulness. Yet stylistic eclecticism kept its sturdy place on the stage. The work also demonstrated that in terms of athleticism in concert dance, less can be so, so much more.

Just as the characters could be any of us in Hotel California, white costumes and an otherwise sparse aesthetic allowed our minds to remain open to multiple possibilities – possibilities speaking to us through the dancers’ attunement to their own bodies and each other, in every reach, turn, and gaze.

The energy on the stage rocketed back up with The Dog Days Are Over, by Paloma Gaspar de Alba, another song with the namesake of its score. Gaspar de Alba blended pedestrian gesture and locomotion with various dance vocabularies to serve up something delicious. From the large ensemble moving together, expansively and joyfully, to unison clapping with pronounced beats in Florence and The Machine’s song, I could float with how uplifted I felt. It reminded me that dance can be both studiously crafted and joyful, period.

After intermission came In Search Of ___ by Samantha Chapa, another clear example of clever eclecticism and a bold vision commendably brought to life. Chapa’s movement vocabulary had the accent and bounce of hip hop, but the attunement to breath and fluid momentum pathways of contemporary dance. Permeated in a shade of purple lighting, an off-beat yet groovy world of its own emerged on the stage. The costume resonated with me less than other elements of the piece’s aesthetic, but sometimes these things are inexplicable matters of taste.

Two pieces later came the layered and intruiging Anomolous by Hailey Cindric and Easton Nguyen. Overall well-constructed and pleasing, the work’s musicality in particular struck me as artistically mature. Cindric and Nguyen found ways to embody the rich soundscape of the scores (“I made a song usings pencils” by Sean Hogan, “Sympathetic Epiphany” by Anticipate), and the dancers embodied that soundscape to the T.

Following that was Matthew O’Hara’s tender duet Holding My Heart, danced by O’Hara and Kristin Sappelsa. They found grounding from the floor and beautiful release with breath, offering freedom for their spines to snake and swerve. That freedom remained even as they executed challenging, athletic lifts and other vigorous movement vocabulary.

More than any technical feats, however, the connection between them remained strong and resonant. Human connection and honesty is really the thing in dance art that grabs our hearts, after all. At the same time, the beauty and stylistic multiplicity of the movement did offer a foundation from which that connection could bloom.

Second-to-last in the program came a work from YCF Guest Artist Jenn Rose, For Karen, danced by Sam Assemany. With poetic text and honest, soulful movement joined together, it delighted the mind, heart, and soul. Text described a conflict of head and heart, and gaining wisdom from the gut to rest easy in the breath. Movement illustrated all of that with size and power, but also with intricacy and deep feeling.

A focus on breath and mindfulness could come off to some as cliche, those being common themes and topics of discussion these days. Yet the poem (from John Rondel, read by Jenny Eisenhower) conveyed the wonder of resting in the present moment through the breath in a fresh, intriguing way. Rose’s movement vocabulary, as well as Assemany’s strong yet easeful movement quality, were just as inventive and satisfying.

That was indicative of the works in this program overall – each with an authentic and unique vision, realized with boldness and openness to all sorts of aesthetics and approaches. I have a lot of hope for this upcoming generation – of dancemakers, yes, but also for Generation Z overall – because they’re saying goodbye to boundaries that no longer serve us. They do not for the sake of doing so, but because they’re letting honesty, creativity, and integrity lead.

The “kids” are grappling with immense challenges, and will continue to do so into the future. Yet I’d say that they’re “all right”. More than all right. Stay bold, stay honest, stay open, and thank you, young artists. Keep on keepin’ on, and keep offering what you offer.