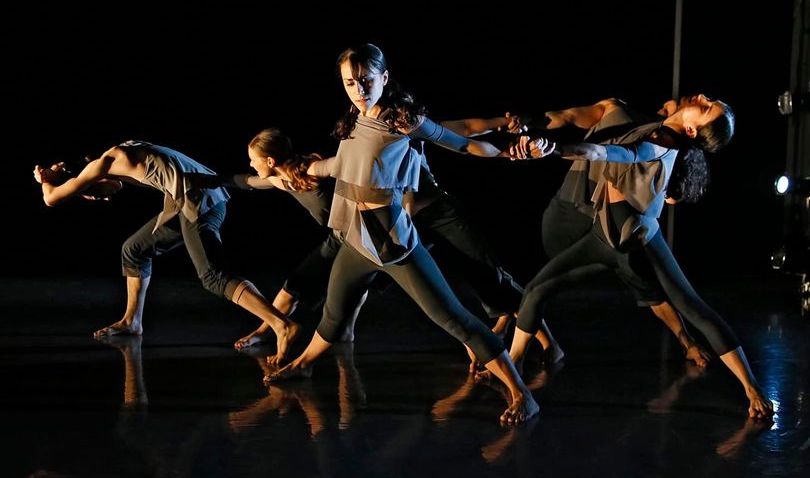 A big reach on a swelling upbeat, a vivavious group section with a creschendoing chord, small yet poignant movements with quieter, humbler notes: music and movement can together create visceral, stirring drama. The tingle in your skin that you can feel experiencing such art isn’t quite the same if you do so over a screen – so that’s something that dance lovers, or at least this writer, sorely missed at the height of COVID.

In Artists in Motion Mini 2022, New York City-based Alison Cook Beatty Dance showed a particular affinity for creating the drama of music and movement in harmony – and company members a comfort with and technical command with executing such work. The program reminded us how special, in its own way, this sort of live art can be: indefinably and uniquely captivating, grounding yet soul-stirring.

The world premiere of Absurd Heroes, which came second in the program, built a chilling, mysterious atmosphere right out of the gate. The ensemble wore grey (costumes by Larissa Shirley-King), enhancing the sense of mystery and foreboding that was building in the air from lights up (lighting design by Tony Marques). The score (“Mountain” by David Lang) had a freneticism, yet also a deep weight to it. The movement mirrored that duality, and thus the drama of the music: with clear accent and fresh shaping through the body.

Dancers seemed weighed down by an outside force, but perhaps also drawn to it: falling to the floor, but their hearts lifted and reaching up. That’s arguably a near universal human experience. There was also lots going on across the stage, through formation changes and dancers making individual choices, yet it was all organized in a way that avoided it being too much to take in. Rather, it was all dynamic and exciting, with the ensemble taking on a vibrant and unpredictable life of its own.

The source of the drama and tension remained unknown, and that can be the fun part about art: pondering our own answers even as we may know that never we’ll get a “right” one (if one even exists). Intellectually, my brain did start to want clues as to the meaning and source of all that drama and tension. Yet visually and viscerally, I remained captivated by all of the dynamism: all of the frequent shifts of relationships between ensemble members and the movement illustrating those shifts.

Memorable among those moments was one with dancers in a line at various levels, giving and taking weight, giving slack and pulling away: united but with wills and inclinations of their own. They soon shifted from pulling on each other to pushing away what could be that outer force: a change that had me thinking, but also appreciating the movement, visuals, and overall experience at hand.

Later, the ensemble lifted and surrounded one dancer. The shapes and movement pathways here were beautiful, yet my brain was again tickled with questions of this dancer’s significance with the respect to the group as a whole. Perhaps the evocative quality of this piece, and the mystery of its cause and meaning (“what is that outer force?”), was aesthetic force enough to drive it as a work of art.

An intriguing twist came with the ending of one dancer moving alone, yet with the weightedness and deep emotion of the rest of the piece. Perhaps it really is that ultimately, it all comes down to our own experience: food for thought that this piece had to offer, apart from its unique aesthetic and kinetic poignancy.

A trio with its own sense of drama emerging from the union of music and movement came later in the program: Seele (An excerpt) [2019], danced by Madeleine Burnett, Genaro Friere, and Ioanna Ioannides. A bold, yet classic atmosphere filled the stage, with dim lighting and dark, long dresses for Burnett and Ioannides (from Materials For The Arts and Hearts To Toes).

Both the music (“Entrada”, “At The River” by Ingram Marshall) and movement were expansive and soulful, and – in alignment with those qualities – the dancers held nothing back. At some points, they embodied a sense of working together in harmony, and at other times one of tension between them.

Particularly lovely were shaping of lines and spinal curves through partnering: both visually and kinetically enthralling. Also memorable was a duet of repeated spinning on floor and rising to pirouette. Through such sections – like chapters in the story unfolding here – patterns of conflict arose. These patterns felt unresolved at end, which to some could feel unsatisfying. Yet one could argue that the open questions allowed for the drama of the piece to live on beyond it – and, just like with Absurd Heroes, that drama could be enough!

The program’s ending piece, the World Premiere of One More Day, had a similarly dramatic feel but with more of a pop culture vibe – and a bit of the melodrama therein, in the vibe of “Top 40’s” songs about heartbreak and longing. “If I Had One More Day”, by Polina Nazaykinskaya and Konstantin Soukhovetski, accompanied the dancers in that atmosphere.

The work opened on one dancer moving on the floor, with the ensemble in a clump looking to him. He later rose and joined the clump, which shifted into a line: the molding and remolding of communities as individuals enter and exit. They pulled on each other to keep the line together (a favorite formation of Cook Beatty, I was starting to see – and one that she does well). Attachments can arise and make themselves known in those entrances and exits of those in our communities.

That Top 40’s atmosphere did strike me as a bit saccharine for my taste, yet what was more on my mind (and in my body, down through flesh and bone) was the beauty of the movement; the dancers were technically excellent and had an honest, 150 percent committed presence. And, of course, one person’s a little saccharine could be something to fully capture another person’s heart and soul. That’s another special thing about art – we can each have a different experience of it and none of us are wrong.

As with prior pieces in the program, the stage picture was organized in a way that a lot was happening, but it all remained clear and digestible. There was a plethora of little moments to draw the eye, and perhaps grab the heart. Cook Beatty seems to have a knack for that spatial organization – in addition to that skill at bringing the atmosphere and drama of a musical work alive in dancing bodies, dancing souls.

We couldn’t experience that in the same way through COVID. It’s one more reason to deeply and fully appreciate live art like Alison Cook Beatty Dance in Artists in Motion Mini 2022 – where there is so much on offer, but the aesthetic force and sensory drama at hand would be enough. We could lose it again at any moment, so let’s never take it for granted. There’s nothing that can absorb us, enrapture us, draw us to think, and lead us to connect in quite the same way. Let’s not forget that.