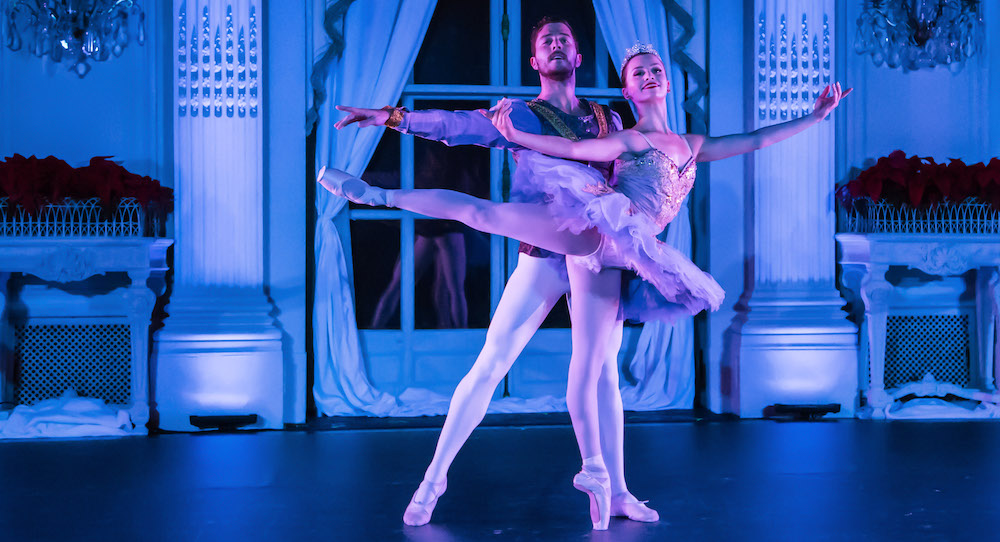 Clichés become clichés for a reason; however trite they come to feel, they contain a nugget of wisdom. I thought about the oft-repeated phrase “less can be more” after enjoying Island Moving Company (IMC)’s 20th Newport Nutcracker at Rosecliff. Due to COVID realities, the program had even more of an intimate, “up-close and personal” feel than the Newport Nutcracker typically does (qualities it always offers, to some extent). A smaller cast did not make the magic any less captivating or multifaceted — on the contrary, it added something new and refreshing.

My whole body piqued with excitement as the overture began playing – which happens every time, no matter how many times I hear it, whether from nostalgia or a physical memory of performing coming up in mere minutes (or a combination of both). The small, intimate setting of Rosecliff’s foyer space seemed to intensify that effect for me, with the sound ricocheting through the space and filling it with its energy. IMC always finds ways to make dance interactive, engaging and energizing in these ways.

Fairly soon into the Party Scene, it was clear that the show would have a different atmosphere and energy this year – although no less interactive and compelling. Promotional information on the program made clear that, due to the need for vaccination as a COVID safety measure, no cast member was younger than 12 (at the time of auditions and early rehearsals, vaccinations were not available for individuals under that age).

The result was a cozy ”chamber” performance-style feel. Rather than less impactful or enjoyable, the larger outcome of that quality was an even more interactive and naturalistic sense – as if we in the audience, like the proverbial flies on the wall, were watching a scene from real life play out in front of us, rather than a carefully crafted and rehearsed performance (which, of course, it was). That, arguably, is a key characteristic of narrative live art that’s successful. Even so, to keep the atmosphere vibrant the dancers’ movement and presence had to fill the same space of prior years with a smaller cast. Commendably, they succeeded in that.

Under that larger context and atmosphere, I noticed a compelling detail in the Party Scene, one of those ways in which companies seek to mix up their Nutcracker program from year to year: Tess Oehlrichs (IMC’s version of Clara, an actual young girl who lived at Rosecliff in the 19th century) caught a glimpse of the Winter Fairy (Katie Moorhead).

Tess (Marin Reko) then excitedly gestured to her sister (Juno Conwell) that she’d seen something unusual and special. Tess engaged even more closely with the Winter Fairy as the act proceeded, with the Fairy even guiding her on the path to further magic. In IMC’s Nutcracker version, the Winter Fairy joins Drosselmeyer in catalyzing the magic at hand. This began to blur the line between magic and reality – something that most Nutcracker productions do to some extent, yet this choice made that blurring even more enticingly specific and bold. We audience members were close witnesses to these moments of magic unfolding.

Moorhead as the Winter Fairy offered her signature unassuming elegance. Reko as Tess brought a quality of attack and strength. At the same time, her soft, easy feet moved her smoothly and seamlessly through choreography and dramatic action. Later in the first act, Brooke DiFrancesco as the Ballerina Doll delivered both warmth and a high level of polished refinement to her performance. Timur Kan’s movement as the Soldier Doll was effectively robotic and yet smooth, like a well-functioning toy.

In more great casting, Raum Aron Gens-Ostrowski built a mysterious quirkiness with Drosselmeyer, one that made the character truly come alive. Emily Baker brought her knack for great theatricality to the Rat Queen. In the Battle Scene, the projectile blocks of cheese are always a zany detail in IMC’s Nutcracker that makes me chuckle. Small bits of humor like that can keep the atmosphere light and joyful in a contentious section like Battle Scene.

Soon, we entered into the bona-fide winter wonderland that was Snow Scene. A unique choice with this production was a different ballerina dancing the Snow Pas De Deux (Lauren Difede, with Benjamin Rabe) – impacting the characterization of Winter Fairy, perhaps, and even allowing for less fatigued and more specialized performances (with the performing demand split in half).

Difede, as always, was a notably strong and honest performer. Rabe complimented those qualities and was a trusty, attuned partner to her. With the larger Snow corps, complex yet clear formations throughout the Snow Scene reflected the feeling of crisp, heavy snow coming down.

Repeated gestures and shapes in the movement vocabulary, such as crossed wrists and arms quickly opening to a “v” shape, further built those clear and layered qualities.The Snow Demi-Soloists, Athena Flournoy and Jenna Torgeson, were light and wispy yet added pleasing punctuation to their movement – like snowflakes blowing sideways in a breeze. This was all possible even with a smaller Snow cast than in years prior – not only possible, but intriguing and layered in its own ways.

Act II came with meeting the Sugar Plum Fairy. Margot Aknin danced her with lovely ease and softness, filling every movement with the lightness of full breath. As an intriguing change to the common Nutcracker structure, the spritely and hoppy variation that Sugar Plum dances in the coda at the end of Act II was towards the beginning of the act. With a show that we see every year (for some of us, more than once per year), small ways of mixing it up year to year – while keeping the holiday tradition’s character alive – can feel quite welcome.

Coffee, danced by Gens-Ostrowski and Difede, oozed flair and confident presence – and as such stayed true to its Flamenco inspiration. Coffee, performed by DiFrancesco and Deanna Gerde, was mysteriously compelling. As another interesting choice unique to this year’s program, IMC’s Coffee is often danced by one ballerina. Two danced it this year, offering opportunities for compelling staging and timing structures such as canon.

Tea had a great way of avoiding cultural caricature: the prop of Chinese New Year-style round paper lamps. In fact, this production overall put the movement, aesthetic, and style over specific cultural references; variations were titled as the sweet at hand (of the “Land of Sweets”) without the ethnicity. The soloist, Flournoy, danced the vibrant movement with a light and clear quality that matched the score just right. The Candy Canes, led by soloists Moorhead and Kan, were elegant and strong. Trepak was as thrilling as ever, with soaring leaps and endless turns from soloist Rabe (with an energetic corps dancing behind him).

Flowers (like Snow) felt like less of a grand spectacle of many Nutcracker performances and more like, again, a lovely little chamber performance: neither quality better or worse, rather each with their own wonder to share. Even still, there was so much action and excitement for the eyes to revel in and spirits to rejoice in. IMC Trainees Grace Byars, Sydney Hitchell, Isabella Ramage and Samantha Watson danced the flowers of the Dew Drop – performed with pleasing understatement and evident joy by Baker. Edgardo Torres Estremera partnered her with strength yet also contagious delight.

Through all of these separate variations, each bringing their own color palette and aesthetic bent, the lighting (designed by Stephen Petrilli) filled the white walls of the Rosecliff ballroom with a color to match: a greenish blue with Chinese Tea, a lavender with Sugar Plum, an orange-red with Arabian. It was one of those stylistic details that, if you can tune into it, can truly delight you as an audience member. It also reminded me that such simple cohesion of visual elements, and intentional choices with something like a single color, can add a good deal to a performance.

The Coda, danced by Aknin and Gregory Tyndall, held its typical magic and “wow” factor. Not forcing a thing, they allowed the movement and all of the supporting elements at hand to work their magic. The high lifts were a crowd pleaser, and rightly so; there was something uniquely enchanting about Aknin lifted high into the space, the attuned dancing pair working together to accomplish something exceedingly difficult (while, of course, making it look like a breeze).

All characters coming together to say farewell to Tess felt just as magical in its own way, their united joy and committed presence becoming more than the sum of its parts. Then came the true ending, with the Sugarplum and Winter Fairy saying their own goodbyes and giving Tess her Nutcracker doll back. In that way subtle threads of the narrative came together, maintaining an element of mystery and allowing separate audience members to come away with their own curiosities, predictions, and interpretations.

Less can truly be more; something not there can allow the magic to multiply in our brains. Understatement leaves room for more wonder. Our senses can feel satisfied rather than bursting at the seams. With the 20th annual Newport Nutcracker at Rosecliff, IMC kept holiday joy vibrant and offered that important reminder. As dance, and our wider world, steps forward from here, we’ll need that kind of knowing to right the ship and make the best of it all.