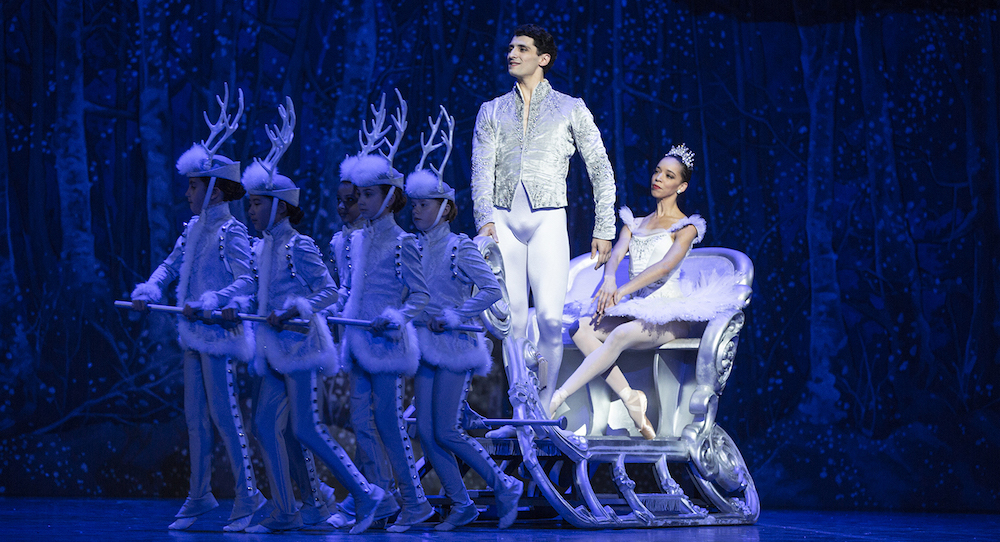 The Nutcracker is a tale with a long tradition of telling, far and wide. How can choreographers keep the story fresh and engaging after so many tellings? The dancing can of course be varied. Yet theatrical nuances can bring new life to the story itself, and not just the dancing within it. Boston Ballet’s Mikko Nissisen’s The Nutcracker is typically a very traditional rendition of the holiday classic, with virtuosic dancing and opulent aesthetic effects to support it – yet year after year, such theatrical subtleties help create a slightly different story.

On this year’s opening night, curtains rose and the first notes of the orchestra rang out to begin the performance. Two passersby whispered and walked by Drosselmeyer’s shop. Others joined, sharing pleasantries such as hugs. This was more entertaining and engaging than just the overture alone (as lovely as the music is), as occurs in many Nutcracker variations. They engaged with Drosselmeyer (Matthew Slattery, with a perfect lanky mysteriousness) through amusing social touches such as them chasing the marbles he threw.

The party scene felt fully naturalistic from the start. Curtains rose to reveal a grand ballroom (set design by Robert Perdziola) filling with party guests curtsying and bowing to each other. Dancing began in earnest with boys and girls splitting into lines. Intriguing formations took place from there, such as a boy and girl leader of each group (boy and girl group, respectively) perpendicular to their lines. These leaders became the centers of circles at a later point. It all seemed to reminisce what can happen in children’s social circles, one child becoming the queen or king “bee”. The parents then danced, every step full of elegance. The women’s ankle-length skirts (costume design also by Perdziola) beautifully underscored the geometry of the movement.

Drosselmeyer then brought two large boxes of treasures – Harlequin Doll (Sun Woo Lee), Ballerina Doll (Dalay Parrondo) and Bear (Lawrence Rines). Harlequin Doll had a flowing ease even with the strength in the character’s movement quality. The crowd cheered and laughed at the dancing bear, belly jiggling through high-flying leaps, and I heard one child exclaim, “It’s a bear!” I couldn’t help but giggle. Before handing Clara (Mia Steedle) the box with her present, Drosselmeyer circled around the room, as if teasing her – another amusing theatrical nuance. 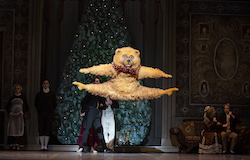 Later, the families left, one child carried out as if sleeping. A maid placed the Nutcracker doll in front of the tree, and then exited. All gone, the room began to darken and the tree grew. Clara ran through, now dressed in a nightgown. She settled in to sleep on the couch, and mice began to run through – foreshadowing the battle to come. As the clock struck, separate mice were caught in spotlight. The audience laughed at this sense of them being “caught”, humorous facial expressions and all.

Them again having run offstage, Clara awoke to not see her Nutcracker present, and cried at the thought that he could be gone. Drosselmeyer comforted her, and they danced a heartwarming pas de deux. Then, in the glow of the Christmas tree’s lights, appeared the Nutcracker become human – the Nutcracker Prince (Paulo Arrais). Clara didn’t have much time to enjoy this magic occurrence before they had to fend off the mice and Mouse King (Graham Johns).

A humorous touch to this battle scene was the Gingerbread Man, Bunny and baby mice involving themselves in the battle – the audience chuckling at the slightly absurd, mostly endearing little touches they added (such as the Bunny dragging away the Gingerbread Man). Them defeated, the scene changed to a winter wonderland. The Nutcracker Prince then unmasked himself, and he and Clara danced a lovely pas de deux. As snow fell, and magic filled the air, they commanded the stage space.

The Snow Queen (Chrystyn Fentroy) and King (Lasha Khozashvili) then graced the stage, epitomizing ease; even through complex and demanding choreography, they moved as smoothly as the snow falling around them. The Snowflakes danced next, a punch and pluck through the movement allowing them to stay right on timing through challenging petit allegro. Their quality embodied the chilly bite, yet beauty of snow itself. With tenderness and warmth, the Snow Queen and King waved goodbye to Clara and the Nutcracker as they floated off on a cloud into the sky. The curtain fell to end the act. 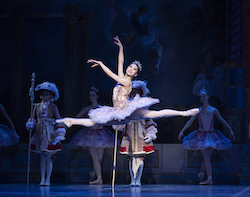 Them floating back down signaled the start of the next act – now in the Nutcracker Prince’s Kingdom. The Sugar Plum Fairy (Misa Kuranaga) welcomed the pair, her port de bras emulating the strength yet softness of a warm hug. Members of the Kingdom filed in, and the Nutcracker Prince re-enacted the defeat of the Mouse King. They looked on in horror, surprise, and fascination. The dancers brought compelling, believable life to all of these characters. These residents of this kingdom, group by group, then danced for Clara.

Spanish (danced by Maria Alverez, Ekaterine Chubinidze, Graham Johns and Alec Roberts) riffed off brush-step, with sharp battements and attitude turns as well. The dancers radiated with joyful energy, from their wide smiles to the lift in their ballon. The stage then darkened to set the stage for Arabian (danced by Kathleen Breen Combes and Desean Taber). As is often the case with this variation, the choreography exhibited astounding flexibility in the ballerina (Breen Combes, in this case) – yet, more compellingly, the movement offered a grace in moving in and out of the limits of her flexibility. 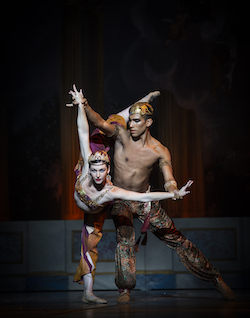 The lights rose again, quite brightly so (lighting design by Mikki Kunttu) for Chinese Tea – danced by 10 ensemble dancers and two soloists (Nina Matiashvili and Irlan Silva). The arc of energy, with large group formations into lighting-fast petit allegro from the soloists to end the section, was lovely to experience. For French Pastorale, Michael Ryan, Rachele Buriassi and Emily Entigh moved with crispness yet lightness. A group of sheep (with one black sheep), a shepherdess, Clara, and Drosselmeyer all added comedic touches that enlivened the scene.

Mother Ginger, complete with giant skirt, and her Polichinelles further brightened the stage. Clara and Drosselmeyer also joined, Drosselmeyer dancing with Mother Ginger – elegant port de bras matching his elegant footwork. Derek Dunn with Mamuka Kikalishvili and Sun Woo Lee then danced Russian, with power and clarity. The choreography used levels to a stunning visual effect – such as one dancer pirouetting while the two others “coffee grinder-ed” (one leg circling on the floor to cut the other out of the picture).

Dew Drop (Seo Hye Han) and her Flowers (Dawn Atkins and Addie Tapp as Lead Flowers) then filled the stage. Han offered a soft strength that perfectly fit the role. The Flowers danced with an organized disarray befitting nature, such as with staggered lines on each side of the stage. Towards the end, they circled center stage to have Dew Drop rise from the center for an ending pose. Different levels of dancers in space, and this center opening, made this pose emulate a blossomed flower.

The Sugar Plum Fairy and the Nutcracker Prince then danced the final Grand Pas de Deux. They both offered a compelling understatement, even while fully committing to expansiveness in movement and overall virtuosity – emblematic of noble spirit and true artistry. This became their own effective theatricality. Kuranga and Arrais’ chemistry of mutual understanding and trust was also quite clear.

Members of the Nutcracker Prince’s Kingdom then convened again to wave Clara goodbye. She then awoke with her Nutcracker doll, again on the couch in front of the tree in her home. She held the doll up towards the audience with a smile. There was a sense of her thinking “well, that was lovely while it lasted!” This subtlety, along with the many other theatrical nuances and humorous, fun touches of the show, re-enlivened this classic tale for another year of telling.