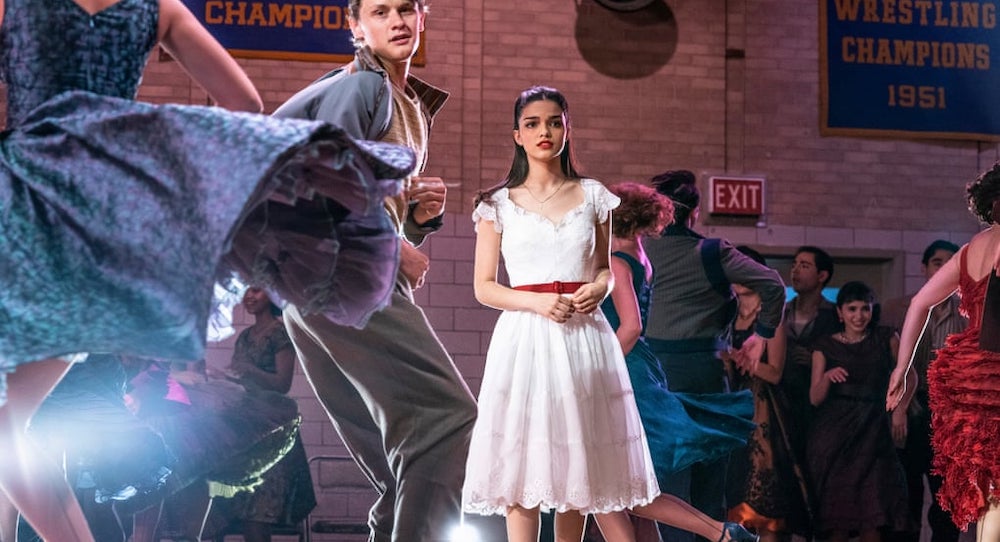 There are people who don’t like musicals. (I’m not one of them). A source of their dislike, so they say: why is everyone spontaneously breaking out in song and dance (and somehow managing to stay in unison)? My retort there is, well, sometimes you have to suspend your disbelief and go along for the ride. Yet, if you take that anti-musical point at face value, song and dance in musicals can be more or less naturalistic.

On the dance side of things, Justin Peck’s choreography in Steven Spielberg’s 2021 remake of the classic 1965 film musical West Side Story seems like an organic extension of the characters’ everyday experiences. Performances enhance that effect through the ensemble’s commitment to genuinely living in the mind, heart and spirit of their characters. Both choreography and performance honored the roots of Jerome Robbins’ classic choreography and direction in the original.

Like all aspects of the film, movement brings us deeper into these characters’ lives and – furthermore – allows the tragic story of fated love to keep centerstage. Both Robbins and Peck, as well as the ensembles that realized their vision for the camera, seem to have understood that the most impactful movement can be found in the lives of those whose stories we tell. Let’s look at five favorite dance scenes from the film that do just that exceedingly well.

Like much else in the film, the opening respectfully tips a hat to Robbins’ work of six decades ago; we hear that iconic snap accompanying the Leonard Bernstein melody line that comes to signify the Jets. Members of the youth gang run through construction sites and abandoned lots. Then, little by little, they shift into unison movement: hopping, low kicks, lengthening a leg to step forward big and proud.

The most technical movement ingredients are passés and pirouettes. Exactness of gestures reflect a Fosse ability to make something simple entrancing. Props like paint cans illustrate Robbins’ attention to detail when it comes to theatrical elements. There’s a success of that focus that one can’t quite put a finger on.

Nothing is flashy or campy, because that wouldn’t reflect these characters’ lives. Rather, the aesthetic is understated and the movement grounded, strong yet smooth. The ensemble moves in a way that reflects both the things in their lives keeping them down and the proud swagger they maintain despite those forces.

Later on in the narrative, members of the Jets and the Sharks (a gang of local Puerto Rican youth) – and their dates – meet for a mixer. Meant to be a social experiment to see if members of different demographic groups can come together to mingle and dance harmoniously, they mostly demonstrate that such mixing and mingling is not going to happen easily.

In a sort of dance battling, the Jets dance with their dates through sultry, vibrant ballroom dance – bringing passion and character to the classic technique. Not to be outdone, the Sharks and their dates offer a lively mambo in a clean horizontal line. Adding an auditory layer to the Latin tunes from the band, the dancers add to their steps a hearty “mambo!” on the eight count.

All of that sets the scene for the pivotal moment of Tony (Ansel Elgort) and Maria’s (Rachel Zegler) meeting (one way, among others, through which West Side Story reflects its inspiration in Romeo and Juliet; in the latter, the “star-crossed lovers” also meet at a themed dance party). They meet behind bleachers and, just about immediately, begin to dance: raising arms shoulder-height to the side and side-stepping in opposition, eyes locked on each other in love at first sight.

A group of the Jets is at the police station for questioning. Officer Krupke (Brian d’Arcy James) has to run out to handle a situation, and he tells them to “not even sweat!” until he returns. They do a lot more than sweat; they imagine up a whole speech to the Officer, explaining why they are the way they are, with a whole theatrical dance number to go with it.

One plays Officer Krupke and another plays a judge. Remaining Jets swoop around these “officials” and fall to their knees, mock-pleading. They have the “social disease” of “juvenile delinquency”, they croon – but it’s all tongue-in-cheek. That sarcasm and playfulness manifest out in their movement, which comes from their own deep authenticity; they’re definitely being themselves.

Their bravado also takes the spotlight, such as with a motif of turning in a football-like huddle. (At the risk of oversimplifying, if there ever was movement or a formation signifying masculinity, I’d say it’d be a football huddle.) Police station paperwork is flying everywhere, adding further movement dimension and also bolstering the Jets “devil may care” vibe. They’re not the kind of youth that any teacher or principal looks forward to handling, is for sure.

It’s going to be a big night for all of these characters, for different reasons. The Sharks and the Jets have a “rumble” planned. (I’ll leave it at that it’s not going to be pleasant.) Maria and Tony, for their part, are planning to spend their first night together. (True to Romeo and Juliet’s rapidly unfolding timeline, they had just met the night before.)

Movement-wise, as the song evolves, the number comes off almost like a movement choir: nothing overly complex or technical on the body level, but with intricacy happening through formations and formations shifts of a large ensemble. These are the organic movements of the characters through their West Side neighborhood, but stylized to have rhythm and form aligning with the song at hand.

Also striking is the contrast between Maria and Tony’s love and the animosity between the Sharks and the Jets. The members of the rival gangs gather and snap their weapons into working order (which also adds rhythm and movement), their expressions stony and vengeful. Maria and Tony, however, are starry-eyed and float while walking just at the thought of seeing each other again soon.

In one of those enticing movement choir-like formation shifts, Maria and Tony both pass their fight-ready compatriots while walking in the opposite direction. All of this is pleasing on a visual and energetic level but also illustrates the contrast of love and vengeance that’s so central to the narrative at large. That all comes through without a pirouette or a grand jete in sight.

Maria’s spirit is soaring after meeting Tony. While at work cleaning a department store, she gets a little fun and imaginative. We all know the lyrics: “I feel pre-tty, oh so pre-tty….” Speilberg’s version, and Peck’s choreography, smoothly integrate the song into Maria and her coworkers’ cleaning shift. She uses a feather duster like a fancy little dog or handbag – because, of course, “Miss Am-erica can just / re-sign.”

Maria sings into the mirror, and her co-worker cleans it in rhythm: spray, sweep sweep, rub rub, repeat all those after Maria’s next notes. Another spins her with the scarf she’s borrowed from a mannequin. Maria is on Cloud 9, like nothing could bring her down. Her co-workers don’t understand where her elation is coming from, but they join in it by the end of the song. None of them know the heart-wrenching turn of events ahead.

Are you curious how it all turns out? Catch this 2021 take on an incomparable classic at a theater near you.