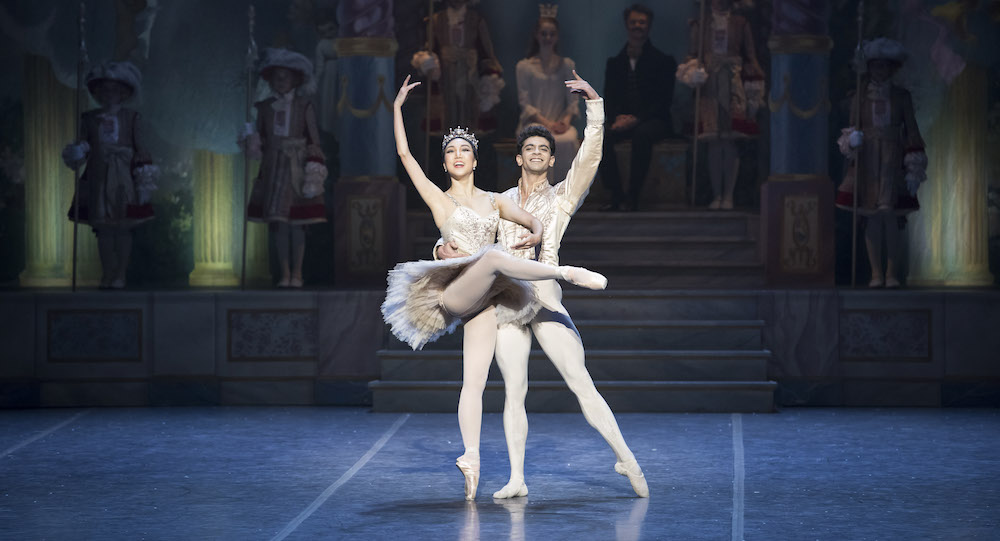 As live performances have returned to theaters this year, many questions have lingered through balcony seats and orchestra pits. Would audiences feel safe and secure enough to return? What would still be possible and what would need to be modified? What would stay the same and what would change?

That last matter kept coming back to me as I took in Boston Ballet’s 2021 rendition of Mikko Nissinen’s The Nutcracker – the company’s first show run back in their Citizens Bank Opera House performance home. The program offered just as much magic, grandeur, humor and joy as it ever has – yet, part of me remained keenly aware of what it seems COVID has changed.

As always when I enjoy Boston Ballet’s The Nutcracker at the Boston Opera House, my eyes were immediately drawn to the large set piece for Drosselmeyer’s toy shop (Tigran Mkrtchyan delightfully portraying the character for this performance). It stayed present over the action on stage for a good portion of the act, a reminder of the toy maker’s pulling of mysterious strings to make all of the magic happen (not to mention his remaining onstage for much of the program!). Children gathered around his shop, reaching high and smiling wide in wishful excitement for holiday gifts and holiday magic (set and costume design by Robert Perdziola).

Soon enough, the scene changed to the home of Clara and the Silberhauses, with party guests in period finery filing in. They interacted and began to dance, patterns and formations shifting in layered and intriguing ways – defined and clear yet entirely naturalistic (rather than feeling performative and choreographed – a harmonious, joyful social gathering). One of my favorite parts of Boston Ballet’s Party Scene is always the women’s dresses, how they fill and float like sails – becoming like triangle shapes – as the dancers extend a leg gracefully back and turn.

It hit me at that point that COVID hadn’t changed the elegance and grandeur of this production. At the same time, although one had to look close to see it (likely due to performances that filled the stage and skillful choreography/direction), the ensemble seemed smaller to me this year.

The party children also seemed somewhat older than in past years. Curious if there was an age minimum for casting eligibility, due to ages for vaccine availability earlier in the fall, I later checked the press release on the program. Indeed, no one in the cast was under the age of 12. From the perspective of public health and the safety of Boston Ballet dancers and crew members, that was certainly a good choice.

Yet, thinking back to past years of this program, I felt the absence of the very young children in the cast – of their authentic warmth and innocence. It acutely reminded me that despite all concerted and skillful efforts, COVID has made its indelible mark.

Speaking of children, something else notable struck me while watching the first act: the place and function of the humor that’s also always been a part of Boston Ballet’s take on the holiday ballet classic (at least for the years that I’ve experienced it). The Nutcracker is widely known as a family-friendly show. (And, I will add, it’s always delightful to hear the laughs and wowed gasps of children in the audience!)

There are parts of the narrative that could be scary for very young children, however – most notably, the Rats and the Battle Scene. Employing humor is a way to lighten something potentially frightening, and therein make it truly delightful for all ages. The hearty giggles of little ones around me, in moments with the Nutcracker Bear’s antics and the Rats’ silly hijinks (both as much a hit as ever), confirmed for me that such an approach can work.

Main characters had the performance chops to delight us in the audience just as much. Drosselmeier’s lanky, serpentine movement offered a wonderful container for the mystery in his character. Clara (Christina Cole) demonstrated a mature refinement to her footwork and port de bras, yet not at the expense of the character’s youthful approachability and joyful innocence. Harlequin (Daniel Durrett) and Ballerina Doll (Maria Àlvarez) both had lovely ways of maintaining suppleness in their movement even while bringing across the characters’ mechanical qualities.

The magic deepened, and audience members could enjoy Boston Ballet’s (just about iconic) gigantic Nutcracker tree. The purples and blues in lighting built the atmosphere of midnight (lighting design by Mikki Kunttu) – that time of day when the unknown could be just around the corner.

Later, in Snow Scene, Chisako Oga offered a Snow Queen with poise and grandeur befitting the magical character. She moved with a lovely ease, extending powerful energy through and past her while not forcing even a muscle or a movement.

The corps of Snowflakes leapt and turned through a true winter wonderland. The variation’s difficulty and demand for incredible stamina amazes me every time. Also notable to me in this viewing was the movement’s collective quality, yet also its moments for individual movement and pathways across the stage – like snow coming down but some flakes getting tossed askance by a gust of wind.

Act II opened with the sweetness of the Angels and the military finery of the Attendants. It all brought the nostalgic, tender feeling of a child’s ballerina music box – a feeling in most classical Nutcracker productions. Sugar Plum (Chyrstyn Fentroy) danced with an ease and lightness demonstrating a confidence in what she offers as being enough – a quite pleasing quality when it comes to classical ballet.

The Spanish Chocolate quartet, on the other hand, was all about drama and fiery energy – an enjoyable translation of the vim, verve and creative light of this culture. Arabian Coffee (danced by Paul Craig and Lia Cirio) is so often about feats of flexibility, but here it was just as much about strength and honest characterization. Cirio further demonstrated her versatility here, bringing across that strength as well as an enticing sultriness.

The French Marzipan trio felt like a Rococo painting come to life, with bright pastels and a light sweetness in movement quality making me lightly smile and want to whistle along to the high allegro notes. Chinese Tea (danced by Isaac Akiba and Abigail Merlis) was as pleasing and spritely as ever, without cultural caricatures. It made clear that Nutcracker variations can evoke cultural specificity and maintain their wonder without those.

The Trepak trio, with mile high leaps and what felt like endless turns, was as much of a crowd-pleaser as ever. Staging was compelling, such as with alternating high and low levels, Lawrence Rines leaping high and the two other dancers simultaneously doing the “coffee grinder.” As another COVID-induced change (most likely not being able to have small children in the cast), the delightful Mother Ginger and Her Polichinelles was not among the culturally-specific variations – another absence that I felt acutely.

Waltz of the Flowers came next, with the rose palette and layered frills of the flowers’ dresses creating a moving garden. Addie Tapp as Dew Drop offered the vibrancy of such a garden with the soft power of her exquisite lines, energy moving out past her limbs like the sweet pungency of a delicate flower.

The iconic coda of Sugarplum and the Nutcracker Prince followed. Something that this production did was allow Fentroy and Lasha Kozashvili to shine in their own way yet also dance together as a great team – attuned to each other and enhancing each other’s strengths.

The program closed as it traditionally does, with Clara having a chance to say goodbye to the residents of the Land of the Sweets. As is common specifically in Mikko Nissinen’s version, some of those residents ran behind Clara’s couch as she slept.

As she awoke, her spirit still alit, the question was of course “was it all a dream?”. She touched the crown on her head that she had received from the Nutcracker Prince and the Sugarplum Fairy, a physical marker that it was all real – a lovely touch of magical realism.

Even while COVID made some changes necessary, that magical realism came across. Amidst the tumult of modern life, and despite changes that such tumult can bring, that’s something to look forward to each year. It can be an annual reminder to not forget the importance of magic, beauty and nurturing the child within.