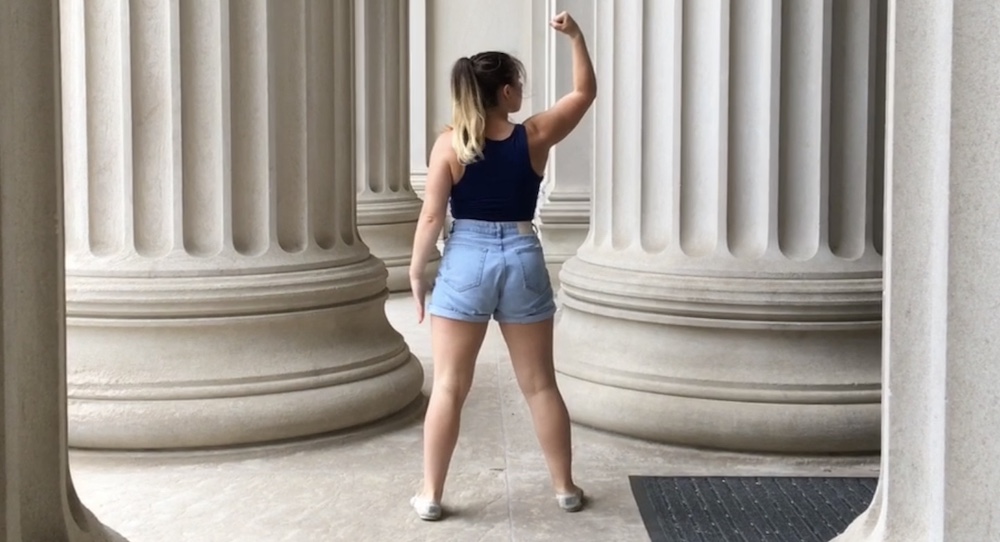 Dance art has a tradition of outspokenness and direct action when it comes to social and political issues. Take Pearl Primus dancing Strange Fruit and Kurt Joos’s The Green Table, for example. The body is the site of so many of those issues, so what better creative instrument to comment on and explore them than the body itself? In 2020, we’re at a moment that amplifies many of those issues out there in the world. Dance companies such as Boston-based Nozama Dance Collective are creating and dancing in that outspoken tradition with work such as An Allyship Project. Streamed on YouTube, the project was in part meant to inform and inspire audience members who care but don’t quite know how to act for positive change. No matter one’s views on these currently heightened social issues, the care and thoughtfulness put into the work is undeniable.

The first shot of part one of the project, “Becoming an Activist: An Allyship Project,” was on a phone playing a video of Trevor Noah, host of The Daily Show and stand-up comedian. He began by speaking about current events relating to race, and the shot cut away to a dancer moving outside — lunging, reaching and gesturing in angular but not stiff shapes. Noah spoke about how social events can be like dominoes; we might at times think they’re unrelated, but we see how one domino knocks over another. Relating to dance, I thought about how a movement in one part of the body ripples through other parts to create something that energetically captures the whole body. I could see this concept alive in choreography and how the dancer executed it.

At other points, Noah got even more specific with regards to current events — such as how everyone is handling COVID right now, and people of color have to handle the racism that’s always been present for them on top of that. The dancer at this point found an intriguing staccato quality, as if embodying the overarching structural impediment that people of color face each day. Other dancers moved in other locations with other dancers — in backyards, on porches, in living rooms. They wore pedestrian clothing: solid-color shirts, shorts and rompers. This pedestrian quality was also in a way present in the movement; while much of it was rather technical, the dancers brought an assuming and authentic quality to the performance.

We heard Angela Davis speak at one point, when, for the first time, two dancers moved together. Dancing in a park (masked and socially distanced), they took up space in a way that was wonderful to experience in this time of so much time indoors. They also moved in a certain harmony, whether in unison or in an energetic tension — such as moving in directions that are right angles to each other. Davis spoke of being able to act in ways that question the status-quo, whatever context or community one may be in.

In a later section, another speaker gave further concrete steps for challenging status-quo — such as taking stock of the people in your circle, and if it lacks diversity taking steps to address that. In this section, a large group of dancers moved in a circular formation — dancing in unison, canon and with various groups dancing at separate points. That felt like a clever connection with the speaker’s discussion of social circles. In terms of movement, a turn became an arabesque, and an arabesque a lunge. The dominoes in the body were falling.

The circular formation also made me think of continuity in society, how it continues as our actions ripple out to make the effects that they will. A duet followed that section, in an alleyway, which felt to me like a shift from a focus on actions in a larger group to one on those in smaller interpersonal actions. Both matter in how we relate to and treat one another. Concluding shots in this first section showed one dancer listening to Robin DeAngelo’s White Fragility and another reaching out to a friend of color. The final shot was that friend smiling on receiving the message while at her doorstep.

Part two, “Sustaining the Work: An Allyship Project”, included four dancers and fewer locations — yet it was dynamic in its own ways. The sustainment it exhibited also reinforced the heart of the matter at hand — sustaining the work through all that may transpire over time. The work began with three different dancers holding signs akin to protest signs — stating “your instagram post is not enough,” “systemic oppression has no place here” and “believe black women”. The three dancers then turned to face Azeb Freitas, choreographer of the project, dancing within a statue structure. They all wore black and pedestrian clothing, creating a uniformity that supported the sense of common purpose. Even while dark in shade, I could also think of this costuming choice as conveying the feeling of a blank canvas — these women as receptive vessels for going forward in the work.

In the darkness of night, light came from the sides of and behind the statue. In that light, the women below could watch, see, and learn from the woman (a strong woman of color) dancing. Powerful slam-style poetry narration accompanied Freitas’s movement, describing the oppression and exploitation of Black women throughout history — down to, and in fact principally, their very body. Freitas moved with conviction and clarity but also an ease that seemed to affirm that she has nothing to prove — because what she offers is enough. Pressing down with hands covering her pelvis, she embodied self-protection. Opening hands to the sides from her elbows, she gestured a welcoming to the work toward the women below. They accepted the welcoming through dancing below her, seemingly improvisationally. The camera caught them from up above, as if from Freitas’ viewpoint.

After they all raised fists in solidarity, the next shot showed the women in a line. The three dancers below (all white) would follow her lead, which felt like a meaningful and important creative choice here. They danced solo moments and then moved out of the shot to the side, so that the dancer behind her could be seen — a creative way of showcasing individual dancers within a formational structure. A good deal of the rest of the work featured solos from the four women. With varied body types and movement signatures, they were clearly all unique individuals even within a community of common cause. This quality seemed meaningful to me, because there is no one “cookie cutter” way to be part of the march toward justice; everyone can and should make a difference in their own unique ways, ways as unique as they are.

One incredibly memorable quality was a sense of sway, rhythm and fun in one section; one dancer swung one leg front and back and then weaved both of her legs backward, alternating directions in a snake-like pattern (dancers know this as a sequence of “cuts”). The rhythm of this movement resonated in her body. I couldn’t tell if she was smiling, because she danced masked, but her presence signaled to me that she likely was. Just as Nozama’s promotional social media post for the work described, the work of social justice can actually be exciting and fun. The score enhanced that sense of joy, with lines from Sonia Sanchez narrating her poetry — with soulful singers and instruments accompanying her.

The poem was sobering, and in some ways was hard to hear, yet the rhythm and tone of the song made it easier to take in. The work of justice is hard and long, but traveling it with others and with a sense of hope and love makes the load lighter. The ending shot, of a door opening, was curious to me. Upon a bit further thought, this shot seemed to me to represent continuity and new opportunity — literally “a door opening”. Such metaphor, image and other elements of aesthetic packaging make difficult truths a bit easier to take in. From there can come action toward a better world. Thank you, Nozama Dance Collective, for doing the work through your art and encouraging us to do the same in our own ways.