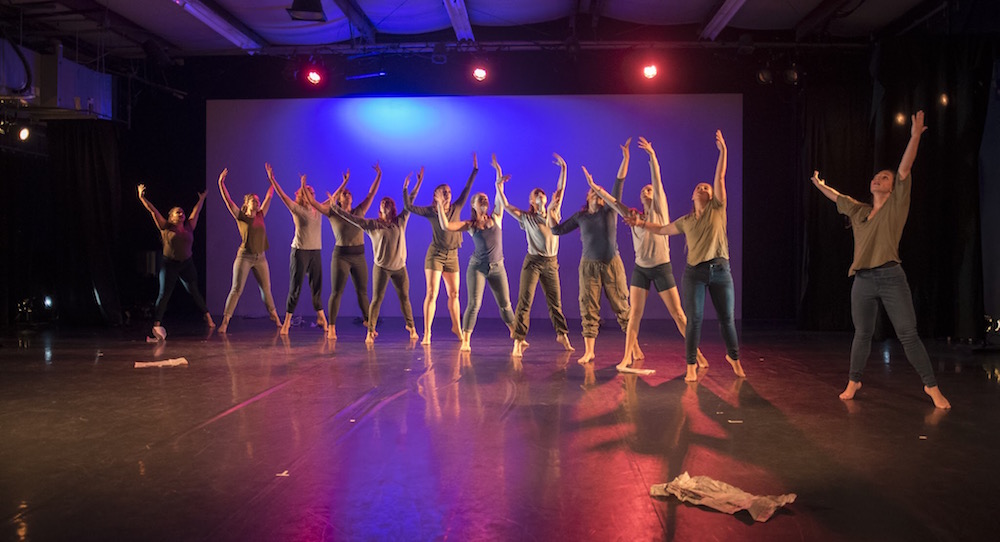 The concept for Nozama Dance Collective (NDC)’s Enough grew roughly along with the emergence of the “#metoo” movement – yet its clarity and ferocity had been brewing for far longer. Gracie Novikoff and Natalie Nelson Schiera, co-founders of NDC, wanted to use dance to assert that women have had enough, have heard enough and are enough.

Right from the start, they wanted to involve female dancemakers and dancers outside of Nozama, just as they did in last year’s show, Bodies and Choices. The name “Nozama” is itself an assertion of female empowerment – as a co-opting of the negative, gendered term “amazon” (a large, powerful woman). The result of Nozama and these various entities joining was 16 works of thought-provoking, aesthetically courageous dance art. 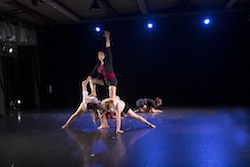 Nozama Dance Collective in ‘We Will Speak When’. Photo by Mickey West.

We Will Speak When, choreographed by Novikoff and danced by five NDC dancers, opened the night. They began in a diagonal line, gestures repeated in cannon. They crossed and uncrossed legs, folded forearms in and released them out. These gestures began to include more virtuosic, “technique-based” elements, although were more improvisational (each dancer with something slightly different). These dancers shared much but were also clearly individuals. All combined, there was clarity yet also raw freedom.

Facings and dancers’ relationships in space (in and out of formation) were crisp and tidy. Yet shaking, punching and other such strong gestures signaled agitation. “We will speak when” there are absolutely no constraints, one could guess of the title’s meaning. Communication could only come through the physical rawness of the movement. There could have been speech, even though the work at hand was dance; many contemporary choreographers use speech. Yet, meaningfully so, there was none.

Toward the end, all dancers paused in stillness, in sharp contrast to the continuous movement otherwise throughout the work. Then came a guttural scream. This was shocking, and perhaps without immediate clear implication. Yet thinking deeper, perhaps minus speech, there could only be a scream. Then the dancers formed a circle, linked arms and shared weight to support one another. The lights came down. For the time being, they would remain silent.

Two pieces later came Resonance, choreographed by Colleen Roddy and danced by her company Colleen Roddy and Dancers. A theme of shared energy in community was clear from the very start. Three dancers began the work, and a compelling two-to-one dynamic began – two dancers alternating phrases with the one other. More dancers joined, and formations began to shift into new formations in lovely ways.

Partnering was also striking, at times even breathtakingly beautiful, both metaphorically and aesthetically – such as in a dancer with an extended leg being passed to new partners to then fold inward to a ball. Also intriguing was a cultural flavor. The score (“Youlogy” by Volcano Choir) had strong downbeats, and the movement a corresponding groundedness. All this reminisced cultural African dance, and the music accompanied it – in a traditional, heartwarming way. Aesthetically speaking, these elements all came together.

The music shifted to something more solemn and mysterious (“Elevator” by Keaton Henson), seeming to initiate an overall atmospheric shift. Lighting by Jeffrey E. Salzberg lowered into striking midnight-blue hues. Codified movement vocabulary was framed in touching ways, such as turning initiated from another dancer’s back (starting back to back) – like a star shooting out pieces of its substance. Initial supportive momentum led to an independent path.

Another touching gesture was a hand to a fellow dancer’s shoulder, signaling connection without control. They formed a pyramid formation to end the piece, supporting the dancer on top to rise high. “It takes a village” to ascend that high. That village they had. I wanted one unison part to be longer, further developed – but all in all, the work was wonderfully constructed and performed.

In the second act came Evolve Dynamic’s Inter/Intra, choreographed by Nicole Zizzi – a multifaceted, yet effectively understated exploration of group dynamics. A line of dancers began facing offstage, then shifted to face forward. Movement included simple gesture that, with all dancers moving this way together, became nuanced and compelling. One dancer began to come forward – stepping, reaching and turning downstage with clarity and conviction. Other dancers followed, and soon enough new formations grew. 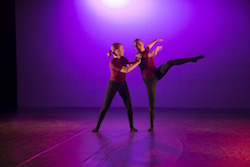 What particularly satisfied me about all these formations shifts, and the phrasework within the formations, was a patience to it all. The choreography took its time to breathe and be present, as did the dancers who performed it.  Also notable was a repeated gesture sequence of an ear to one shoulder, the same hand rising to rest on it, and then a twist of the neck for the chin to rise up toward the sky – striking in its outward simplicity but also its deeper nuance.

This was done through stepping patterns and simple turns – the ensemble together making these simple steps into spellbinding images and energetic effects. Soaring leaps, sky-high extensions and multiple turns weren’t necessary to make these effects. These women moving together in space, with cleverly constructed phrasework and gesture, was more than enough – just as the theme of the show asserted they themselves are.

Expression of the show’s theme came to an apex in the final piece, Enough, choreographed by Novikoff and Shiera. To begin, the dancers lay – all across the stage – with newspapers. A voiceover score (with underlying instrumental tones) reminisced the 2016 election, subsequent inauguration of Donald J. Trump and early days of his presidency. A particular theme was with women’s rights and empowerment – Elizabeth Warren defining the characteristics of “nasty women”, newscasters discussing access to birth control and pro-choice activists chanting rally slogans.

All the while, the dancers moved with their newspapers – reaching, gesturing, turning and extending legs on their back. Something about the newspapers felt tangible, concrete and comprehensible amidst the chaotic news of the voiceover. The movement had the same qualities – linear (with occasional curves to soften), with clear facings and executed with conviction. The dancers rose, the music shifted, and lighting brightened.

Voiceover spoke of women “fighting back” and taking charge of their futures, such as through the Women’s March immediately following the 2017 inauguration. Movement became more lifted and less agitated.

There were gestures of reaching up – in strength but also in a softer hope. Formations were in clear lines, signifying unity and clarity of vision. Lights came down, but energy of hope and solidarity still palpably surged through the theater. In the show overall, but particularly in that moment, what felt most important of the three-part theme was that women are enough. The dancers skillfully executed thoughtfully constructed choreography. All technical elements came together in support of the choreography and performance. Enough demonstrated the power of well-constructed dance art to speak to a timely, universally meaningful issue. Dance, too, can be more than enough.