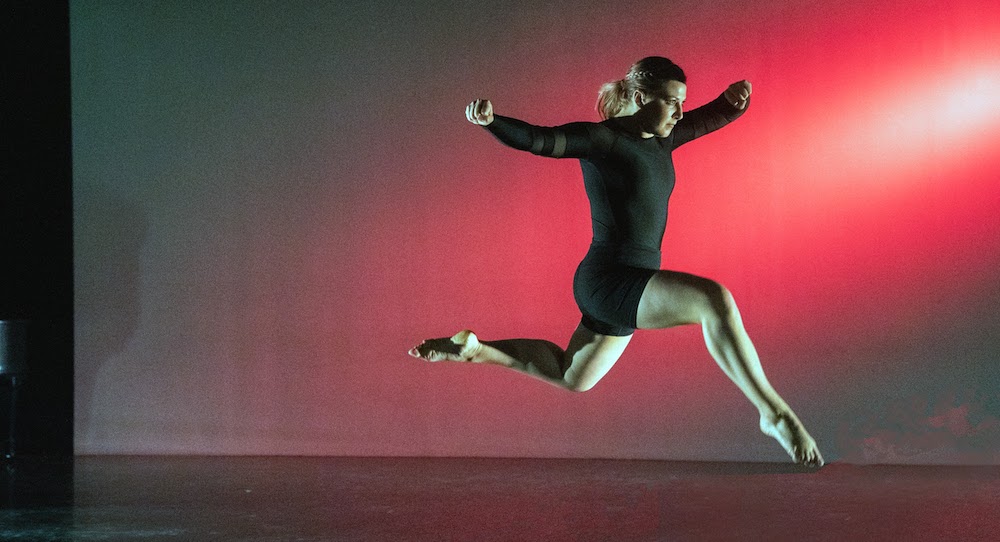 There’s a lot in this world that feels capable of bringing us down. The weight of people’s pain out there, in addition to what we personally face, can feel overwhelming. Yet dance can lift us up — inspiring us, entertaining us, even leading us to beneficial action. Even works focusing on the hard things can offer perspective and help us to see those things in a new way. Nozama Dance Collective’s show Uplift illustrated dance’s power here. Thoughtful choreography, design, and performances left me inspired, pensive, and overall satisfied.

The duet “Perceptual Projection”, choreographed by Juliana Wiley, was third in the program. It opened with the two dancers, Dana Alsamasam and Katie Logan, close to each other in space. They then spread out through the stage space, while white light disbanded into its colors on the backdrop. Spotlighting from the stage sides added a lovely touch to that visually striking effect. Dancers reached out with one arm but concealed their faces with the other, while facing opposite sides of the stage. It was as if they were reaching outside themselves but also self-protecting from what could be found there.

They soon rejoined and linked arms at shoulder height, spinning like a slowed-down planetary orbit — compelling visually and energetically. They then separated and made larger orbits, but kept the same shape in their arms. They were venturing out but still maintaining something from the prior connection. Their movement was weighted, released, organic to the body and physical laws. It also varied in speed, which the electronica score (“Nn/peaks” by Kanding Ray) could accommodate well as a base.

Also varied were the ways in which the dancers related or didn’t relate to each other — dancing different movement at the same time, or in unison, for instance. Unison movement was particularly compelling and satisfying when done facing opposite sides of the stage, like a reverse mirror echoing the beginning. I wondered, what effect might this choice have had if sprinkled more throughout the piece? It was an overall aesthetically satisfying work, with meaning having significant implications for human relations. Being adeptly portrayed in movement, this meaning at work added to what we know of the broad possibilities within contemporary dance.

“Introspection”, choreographed by Kelly Cormier, followed that duet. The score, “Night” by Ludovico Einaudi, had a mysterious quality of notes exploring highs and lows. With a lower harmony line coming in, dancers spread out across the stage. One by one, they rose to move in their own movement vocabulary, along with that harmony line, to then fall again. Three dancers stretched their bodies long, and two other dancers moved together higher in space — a memorable and lovely moment.

It all felt like a group of people coping with their own inner struggles separately, yet coming together at certain moments of commonality. One of these moments was in canon a lifting the torso and reaching back with one arm, to then fall back to the ground all together. Similarly, later on they all got to their feet together but gestured in different ways once they got there. Then all together, they swooped one arm up and over, describing a half circle. In all of these sections, dancers smoothly moved in an out of unison, constructing an organized but not rigid visual effect.

A movement phrase within one of these sections was particularly striking — a quick arabesque back, arm forward and passe to sweep the leg back again and then fall to the ground. It all felt visually and energetically appealing to me. Overall, these unison moments illustrated what those in the group shared, even when they didn’t directly relate; even when we don’t realize it, there is so much in common amongst us humans. That feels like an important message in a divisive time in this culture. To end, the dancers slowly reached up with one arm as the lights faded down. There was a sense that they would continue to share something, but not quite connect despite that sharing.

“The Phoenix Rises”, choreographed by Gracie Baruzzi and Natalie Schiera, came a couple of pieces later. To begin, dancers in a line, kneeling, rippled their spines forwards and backwards and then forwards again — all in canon. This effect felt like movement rippling through a centipede’s body. They reached one arm up and out together, but then rose from kneeling to dance their own movement vocabulary. Individuals broke out from unified group, but a sense of connection remained with lifts and unison movement in “window box” formations.

The score, “Elan” by Factor Eight, was a layered, lovely instrumental piece with a hopeful sense. The sound of breath within it resonated with me. It complimented that sense of ‘the phoenix rising”. Illustrating this rising in movement, a memorable image was the group in formation reaching while low and a dancer moving up higher, and then her joining — illustrating group and solo energies. The groups moved in and out of these different ways of the group relating fairly quickly. I wondered what would have been the effect of staying in some of these modes a bit longer, as a creative question for further exploration.

The movement vocabulary was also quite varied, but in a way that was quite digestible and pleasing. The ending, a group pose with one dancer lifted high and under her varied levels and shapes, was visually satisfying while also pleasing in terms of energy and meaning. It hit me as quite powerful and memorable. The dancers seemed to be literally and metaphorically lifting each other up.

The title work, Uplift, also choreographed by Baruzzi and Schiera, opened Act II. The work had a strong yet nuanced sense of this lifting each other up. Lights came up on two dacers, arms circling and reaching. The score, “Lisa” by Factor Eight and featuring Lian Howie, had chanting accompanied by sustained chords. Later on in the piece faster piano notes came in, and the dancers moved more quickly along with it. They joined a partner to lift one another, but then separated to dance in unison. This effect seemed to show a healthy sense of unity but their individualities still strong.

There was also often a clear feeling of energy passing back and forth between dancers and groups of dancers, almost like a set of Newton Balls. It was all intuitive to the body and physics of movement in ways that were quite pleasing. With a music shift, further partnering occurred and group energy built in a way that was quite captivating. Some unison sections simply gave me chills, the group energy building and the hopeful feeling in the music ringing through to my bones.

Dancers embraced, and then the lights cut out to end the work. There was a sense of these dancers uplifting each other without actually lifting each other high. In an effective way, this ending stayed away from the overly literal. I did feel as if I wanted to see that embrace moment a bit longer, with a slower light fade-out. Nevertheless, it — and so much of the show — was an adept and touching way to convey humans supporting other humans through movement. I felt inspired and hopeful in a way that I myself felt uplifted. Dance has the power to do that — and let’s not forget it.