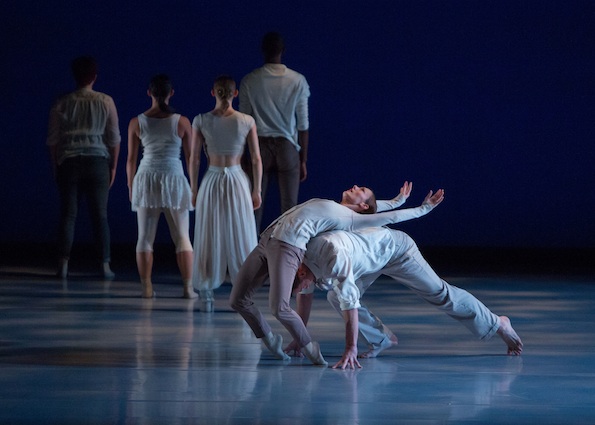 Some dancers dream of being able to perform works by “hot” choreographers like Sidra Bell, Larry Keigwin and Kate Skarpetowska. And some dancers are actually able to do this – and in one place, Houston Metropolitan Dance Company (MET Dance.)

MET Dance is a repertory company, meaning each performance features a wide variety of works by various choreographers, sometimes highlighting up to six choreographers a year. This keeps things interesting for the dancers and audience members. MET Dance is different because it strives to feature emerging and guest choreographers that, like the company itself, are at, or perhaps nearing, national attention.

The company was formed in 1995 under the direction of Executive Director Michelle Smith and then Artistic Director Dorrell Martin. The group fell financially and artistically and decided to reorganize in 2003. Current Artistic Director Marlana Doyle was one of four dancers rehired to put the company back together.

The diversity and range of the company is what brought Doyle there in the first place. She graduated from Point Park University and moved to Houston in 2001. “I did not want to follow all my fellow graduates to New York and Los Angeles and knew Houston had a great dance scene and is supported by the arts,” she says. 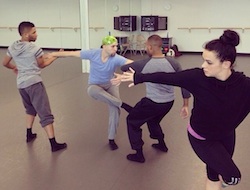 Even when Doyle was still dancing with MET Dance, she became the Company Liaison in 2003, Company Manager in 2005, Managing Director in 2009 and then transitioned to Artistic Director in 2012. She strives to gain national recognition for the company and to always take chances on choreographers and dancers.

“I see a lot of dance and try to take notice of who is ‘hot’ on the dance scene and who will fit in our budget,” says Doyle. “The dancers also suggest who they are interested in working with.”

“In any given season, you could be seeing classical jazz dance, modern dance, dance theatre, contemporary ballet and maybe even a tap piece, all in one concert,” says Joe Celej, an independent artist and senior company member of NYC’s Elisa Monte Dance who danced with MET Dance from 2001-2005 and continues to be a guest performer and choreographer with the company. “It’s remarkable. And remarkably rare to see this anywhere else.”

To keep up with the ever-changing, unpredictable repertoire, the dancers, too, must be versatile and well-trained. A day for the MET dancers begins with an hour-and-a-half class that changes daily between ballet, jazz, modern, improv, yoga, Gyrotonic or Pilates.

“Our artistic director oversees the schedule to make sure our class and rehearsal coincide,” says Lisa Wolff, who is now in her seventh season with MET Dance. “For example, if we are rehearsing a contemporary piece that day, a ballet class is necessary. If we need to be more grounded, we will have modern, and so forth. The great aspect is that every day is different, and it never gets boring.”

Most of the MET dancers have a strong influence in jazz and have all had ballet and modern training, but they are all quite different in their look and style. Yet, even with this range of backgrounds, the company is able to find that balance of dancing as one while still holding on to their individuality.

“We blend as the MET but are allowed to have our own personality,” Wolff says. “I think the next generation is very good at being their own person. They’re being told to self-explore and find what feels good in their bodies, but when it comes to specifics, detail gets lost. We know how to incorporate both.”

Doyle explains, “I look for commitment to movement, confidence in shapes, direction and passion in dancers who are auditioning for MET Dance. They also have to have a great understanding for many different ways to move. The rep is physically demanding and athletic. These are also great attributes to have as a dancer.”

The 2014 season looks to be an exciting one for MET Dance. It will be the company’s first full year in the new Houston Metropolitan Dance Center facility, to which they relocated in May 2013. The company most recently presented two works, Peter Chu’s Love Duet and Skarpetowska’s Consumed, at the APAP|NYC Conference in January, when they also held two NYC auditions. MET Dance will also present two premieres by Andrea Shelley and MET Resident Choreographer Kiki Lucas in its spring concert titled #womenfordance, featuring all female choreographers. In the company’s upcoming free summer dance concert to be held at the Miller Outdoor Theater, an emerging choreographer (who is currently being selected from a pool of entries) will premiere a new work, along with Celej’s newest premiere, Primed.

“The intensive allows the directors and company members a chance to work in class and rehearsal settings with dancers interested in working with MET,” says Celej, who is also on the intensive’s faculty each year.

“I hire through a two-step process,” Doyle adds. “We hold two auditions every season in New York and Houston. Once seeing the dancers go through the audition process, then I usually ask the ones I am interested in to attend our Summer Intensive, free of charge, for six days. I then get an idea of their personalities and work ethic.”

With its broad range of artistic voices, both among the group of dancers and the choreographers brought in, MET Dance surely has lots to say.

“MET Dance has so much to offer the public at large,” Celej concludes. “I hope and believe that the organization can continue to grow and be a force on the national and international dance scene.”

For more information on MET Dance, head to www.houstonmetdance.org.

Photo (top): MET Dance in a performance of After the Rain by Lauren Edson. Photo by Ben Doyle.