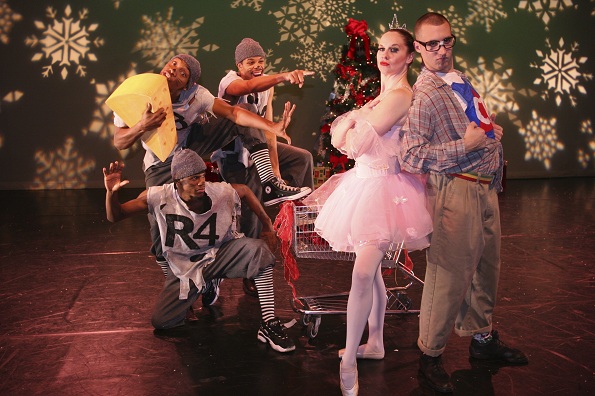 ‘Tis that time of year again…Sugar Plum Fairy time! With Thanksgiving, Christmas and Hanukah each year, comes that other annual holiday tradition: The Nutcracker. With its familiar music, opportunities to see dance or perform it, and as the gateway into that inevitable warm, fuzzy holiday feeling, The Nutcracker most often becomes a part of the holiday to-do list.

But why not check out some of the Nutcracker alternative productions this year? Some still use those catchy Tchaikovsky tunes, others don’t, some take a completely different story route, and some will just, well, crack you up! Here, Dance Informa highlights some of the many different takes on the traditional Nutcracker.

Ballethnic, an Atlanta-based African American dance company, takes a spin on the traditional Nutcracker by transporting the story to a family of a culture different from the European one often depicted.

Urban Nutcracker takes place in Atlanta, Georgia, in the 1940s. Characters include Sarah Johnson, her brother, Leroy, her parents and her godfather, Professor Isaac, who presents Sarah with the Urban Nutcracker Doll, made in the image of Marcus Garvey. Before each act the audience also meets Big Mama, a grandmother character who narrates the story to her granddaughter.

In the ballet’s second act, alternative divertissements include the Black Russian dancers and the Coca Cola Pas de Six, and to end the dancing celebration is the Chocolate Pas de Deux with Brown Sugar and her Chocolatier.

“I was intrigued by the thought of creating a ballet that would present a humanistic view of the African American family,” says Waverly T. Lucas II, co-founder of Ballethnic and choreographer of Urban Nutcracker. “This is why I created characters that offer a glimpse into the everyday life of African American families. Many of the characters could easily be changed to reflect Hispanic families, Asian families or other cultures.”

This year marks Ballethnic’s 21st anniversary of Urban Nutcracker, which will run from November 15 to 18 at Atlanta’s Ferst Center for the Arts. For more information visit http://ballethnic.org.

For as long as she can remember, choreographer Angela Harriell was always moved by The Nutcracker, especially by all the dedication and hard work required by the dancers of the Grand Pas. Even still, however, as a teenager she thought the holiday classic was “a bunch of fluff” and desired to someday create an alternative. So, seven years ago, Nutcracker: Rated R was born.

“Nutcracker: Rated R cracks open the heart of the classic children’s ballet to uncover drugs, sex and family secrets. It’s a dark, witty and satirical homage to, and cautionary tale about, the excesses of nightlife,” Harriell says.

In her production, Clara is a rebellious teen whose Uncle Drosselmeyer takes her back in time to 1980s New York, where she discovers the underground club scene and her family’s untold history. Nutcracker: Rated R mixes the original Tchaikovsky score with contemporary beats and fuses ballet, breakdance and burlesque movement.

This year, the production will take place on December 20-21 and December 27-28 at Le Poisson Rouge in downtown Manhattan. For more information visit http://theloveshownyc.com

Giada Ferrone’s The Nutcracker, A Contemporary Ballet, fuses an array of dance styles and introduces new characters to the mix. Photo by Darya Fowler

In 2006, when choreographer Giada Ferrone was teaching in a Manhattan dance school and realized the school’s population was so diverse and interesting, the idea came to her to create a modern day version of The Nutcracker, with new characters and an array of dance styles. She thought a new version of the famed production would “represent that community of dancers and be approachable by a larger audience.”

That same year, Ferrone choreographed The Nutcracker, A Contemporary Ballet as a studio production, and since 2010 the ballet has been fully self-produced by herself and Tamara Saari. Ferrone’s 90-minute production fuses ballet, contemporary, hip hop, breakdancing and a traditional Tarantella. New characters include a Hip Hop Toy, a group of spirited Candy Canes with flyswatters and the King Spider (whom Clara must defeat to rescue her captured dolls). The Nutcracker, A Contemporary Ballet uses Tchaikovsky’s original score, with additional music by Vivaldi and traditional Italian Tarantella.

The production “is distinctive for uniting students and professionals from several dance communities from all over New York and Connecticut, while promoting the positive and powerful impact of dance on our fragmented communities and creating a cast which is as truly international and diverse as NYC’s own ‘melting pot’,” says Ferrone.

This year, The Nutcracker, A Contemporary Ballet will be presented at the Ailey Citigroup Theater on two weekends, December 8-9 and December 15-16. For more information visit www.thenutcrackernyc.com

The Philly Nutt Crak-Up is a hilarious holiday dance take-off of The Nutcracker that combines comedy, hip hop, jazz, modern and ballet, not to mention kung-fu fighting and superheroes. The story, based on an original rap written by the production’s Sugar Plum Fairy herself (who raps in the show!), is filled with references to local Philadelphia places, personalities, foods and skylines. Characters include the Rappin’ Sugar Plum Fairy, her battling Hip Hoppin’ Rats, City Hall Dolls, Captain Philadelphia and Liberty Belle-Anne.

“There are so many Nutcrackers annually that I felt it was time to produce an alternative show that everyone would enjoy,” says Gail Vartanian, artistic director of ContempraDance Theatre and choreographer for the Philly Nutt Crak-Up. “Philly Nutt Crak-Up combines all genres of dance, which makes it extremely interesting and a lot of fun.”

This winter marks the production’s ninth year, when it will be presented at Philadelphia’s Keswick Theatre on December 15 and 16. For more information visit www.contempradancetheatre.org.

Some years, Atlanta Ballet performs their Nutty Nutcracker at the end of their Nutcracker run. This one-night only show is a Nutcracker parody created entirely by the company dancers – from choreography to choice of music, plot to costumes. Nutty Nutcracker serves as a fundraiser for the Dancers Resource Fund, an organization that helps dancers in retirement or transition. In past productions, characters have included Lady Gaga, Batman, Brad Pitt and Angelina Jolie, Scooby Doo and more.

This year, although Atlanta Ballet will not present Nutty Nutcracker, the company will celebrate its 53rd annual production of The Nutcracker with a few artistic changes and additions. Artistic Director John McFall has invited magician Drew Thomas, a finalist on America’s Got Talent, to add more magic and illusions to Act 1. In addition, McFall has also choreographed a new party scene.

Atlanta Ballet’s Nutcracker can be seen at Atlanta’s Fox Theatre from December 7 to 26. For tickets and more information visit www.atlantaballet.com/tickets-performances/nutcracker.

New York City’s Urban Ballet Theater, led by Daniel Catanach, aims to create performance projects that express a vision of urban life and the inner city. Nutcracker in the Lower is their version of The Nutcracker that brings Clara and characters to NYC’s Lower East Side and combines the classic story of Clara and her magical adventures with some elements of the cultural diversity of Manhattan.

Nutcracker in the Lower’s first act’s traditional party scene becomes a holiday salsa party, and the battle scene takes place in a downtown subway station with a duel between rats and hip hop toy soldiers. The second act sees additions of Native American and African divertissements.