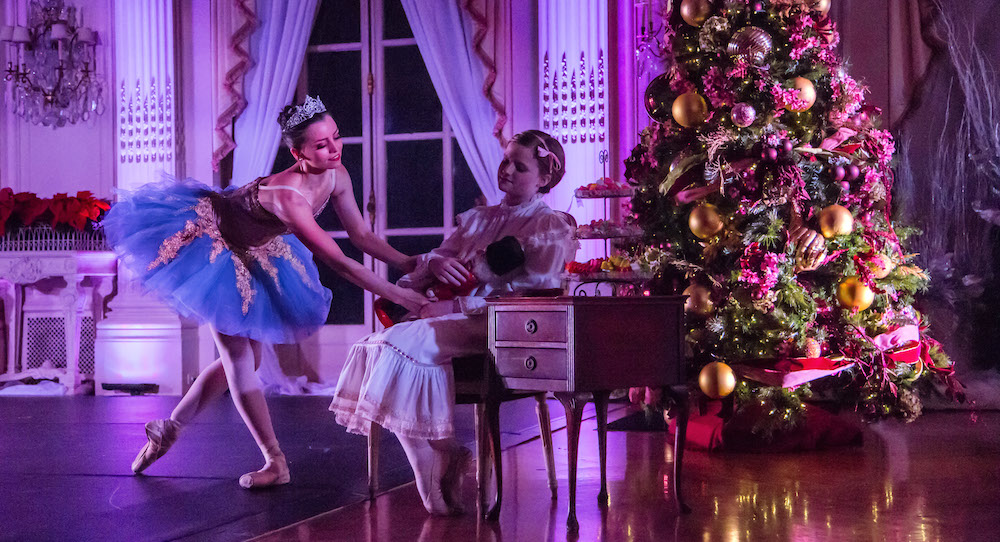 We so often associate The Nutcracker with a whole lot of pomp and circumstance: blizzards of synthetic snow falling from the rafters, bright holiday lights all across the proscenium, opulent classical costumes in the highest of finery. Yet, what if this story was presented in a more quotidian aesthetic, without losing the sense of fantasy and magic at hand? What might happen then? Island Moving Company (IMC) answered that question for me in its 2022 Newport Nutcracker at Rosecliff (the company’s 21st annual).

While the spirit of holiday and magic and cheer was still very much alive, the aesthetic was one of “less is more”, at least as compared to past years of the Rosecliff holiday tradition. Performers offered a quiet softness in their dancing as well — the aesthetic and the kinesthetic then coming together cohesively. A presentation grounded in more realism and physical ease reminded me that yes, magic can be possible in this very world.

As usual, IMC’s Nutcracker began on the grand staircase – the Oelrichs (Clara’s) family welcoming guests into their holiday party. Performers and audience members soon moved into a grand ballroom, for gift exchanges and dancing. The young girls toying with the present boxes, them playfully stealing away with Drosselmeier’s (Gregory Tyndall) hat. Little theatrical moments like these, humorous and authentic, enhanced the sense of verisimilitude at hand. Seeing that IMC’s version portrays a family that really lived, and lived in the very mansion where the show is presented, such realism was all the more fitting.

The magic would emerge before long, however; Winter Fairy (Isabelle Ramage) danced into the ballroom and, entranced, Tess (IMC’s Clara, danced by Nicole Murray) caught a glimpse of her. Through such choices, IMC always brings the fantasy and the realism of the Nutcracker story face to face. It’s a riveting blend that’s characteristic of The Nutcracker more broadly – one that’s also part of what’s made it a such a widely-presented, widely-loved holiday tradition.

On the realism side, the ballroom felt less lavishly decorated than in past years – just enough to feel welcoming, cozy and pleasing. The dancers met that minimalism with their movement quality: assured, strong and clean, but not overdoing a thing. Tyndall added power and elegance to Drosselmeier’s mystery. In the next room, with more gift exchanges, Lauren Difede added just the right kind of sweetness and ease to Ballerina Doll’s robotic movement. Edgardo Torres Estremera similarly hit Soldier Doll’s stiff, yet pliable movement quality just right.

Not all of Drosselmeier’s gifts were so grand and fantastical; he gave the little girls small dolls, which they cradled lovingly. Tess’s sister just needed to play with her sister’s Nutcracker, however – pulling at it until it broke. The way the adults scolded her (both parents and Drosselmeier) added more realistic dramatic flourishes to the program. Such building of the story led into the attack of the Mice, Rats and Rat Queen. Deanna Gerde, dancing the Rat Queen, effectively used her long lines to build the character’s somewhat cryptic feel.

Tess was right in the heat of the battle between the Soldier Dolls and rodents – yet her Nutcracker doll coming to life as the Nutcracker Prince (also Tyndall) could offer her some solace. The fantasy at hand continued with the Winter Fairy returning, leading Tess into a magical land of snow falling all around (and also leading us audience members back into the ballroom). Even with such magic all around, the aesthetic remained pleasantly understated. I could believe it as any everyday snowy edge of a forest.

The Snow ensemble brought the section’s typical effervescence, the movement quality nevertheless aligning with that pleasant understatement of the world around them. Circular motions, blended with more linear shapes and pathways, brought the sense of snow blowing in a gust. Brooke DiFrancesco and Timur Kan danced the Snow Pas De Deux with an elegant serenity that hit just the right tone for the atmosphere at hand. Everything feeling so realistic, even if fantasy was surely alive and well here, had me all the way invested in Tess’s journey into the Land of the Sweets.

Act II opened with the Sugarplum Attendants, with light and lifted movement – and formation shifts just as light and easeful. The Sugarplum Fairy soon entered, moving with ease yet full precision in musicality, lines and épaulement. Chocolate, danced by Kelly Moeller Rabe and Tyndall, and was precise yet also full of vivacious abandon. At the same time, these dancers also moved in a way that was cohesive with the elegantly understated atmosphere of the overall program.

Emily Baker and Athena Flournoy danced Coffee, offering the silky mystery that often makes this variation quite intriguing. They frequently danced in close proximity – when combined with the serpentine shapes of their hand-held fabrics, formations that made multifaceted shaping through the space. Swirls with the streamers reminisced cream swirling through coffee before stirred. That shaping wasn’t so complex as to lose clarity, however. Less can be more, as this program overall demonstrated.

Lauren Difede, Brooke DiFrancesco and Torres Estremera danced Candy Canes. Having a group of three (two ballerinas and one danseur) allowed for satisfying formations — Estremera lifting one of the ballerinas while another danced close by, shifting into a triangle formation facing the audience, for example. In that theme of less is more, if structured well a smaller group can sometimes offer something more satisfying – more digestible, more approachable, more intimately human – than the biggest ensemble ever could.

Trepak came with Timur’s Kan power and finesse-filled leaps, also full of authentic joy. The corps accompanying him, with similar joyfulness and finesse, helped fill the stage behind him with just as much vibrancy. Tarantella, from Mother Ginger (Mary Van Pely to two sections of the corps, offered dynamism in spades – but all in the measured feel of the overall production. With so much sweetness and fun, the crowd ate it up, clapping notably louder than for other variations, as wonderful as those all were (and some audience members even audibly cheering, as well!).

Moving into Waltz of the Flowers, Deanne Gerde was understated and soft – hitting the feel of the overall program to a proverbial “T”. It felt like not overdoing anything actually helped her to achieve a clear, yet still strong and lively, quality — nothing superfluous, nothing ostentatious. The corps of Flowers performed movement, and danced through formations, that felt circular yet curvaceous – like the edges of flower beds or the graceful bells of rose heads. Tess also danced with them – one of those nuances and choices that can keep The Nutcracker fresh and exciting year to year, from company to company.

Grand Pas de Deux, danced by Margot Aknin and Benjamin Rabe, brought its typical elegance and ethereal beauty — as only fitting in this program, however, without anything garish. There was no need for an “attack” of the movement. Rabe and Aknin also worked quite well together, partnering with cohesion and harmony. That’s how the magic can truly come through.

The finale, bringing back all of the residents of the Land of the Sweets to dance with Tess, offered a vibrantly full stage. That was something special to experience after the worst of COVID, so many bodies moving together in full health and life. From there came time for Tess to say goodbye. Many Nutcracker productions will do their own spin on that ending, as a way to offer something unique to their production – and sometimes even from year to year.

This production’s ending was no exception; Tess, holding the Nutcracker high, ran offstage and the lights lowered. This was a straightforward choice: easily digestible, effective. Yet, it also offered mystery, with many different interpretations very possible and valid. How much in the real world and how much in the fantastical one was Tess, and would she be? That could be a lovely question for audience members to carry away with them, out of Rosecliff and back into holiday frenzy.

In a modern world that feels so uncertain, and often chaotic, sometimes straightforward and realistic is what we need. Yet, some sprinkles of magic can also add some spring to our steps and widen our smiles – sparking our souls out of our everyday routines. That’s the magic of the holidays — very real, but also full of wishes, imagination and fantasy. Thank you to IMC for a Newport Nutcracker at Rosecliff that hit such a note just right.