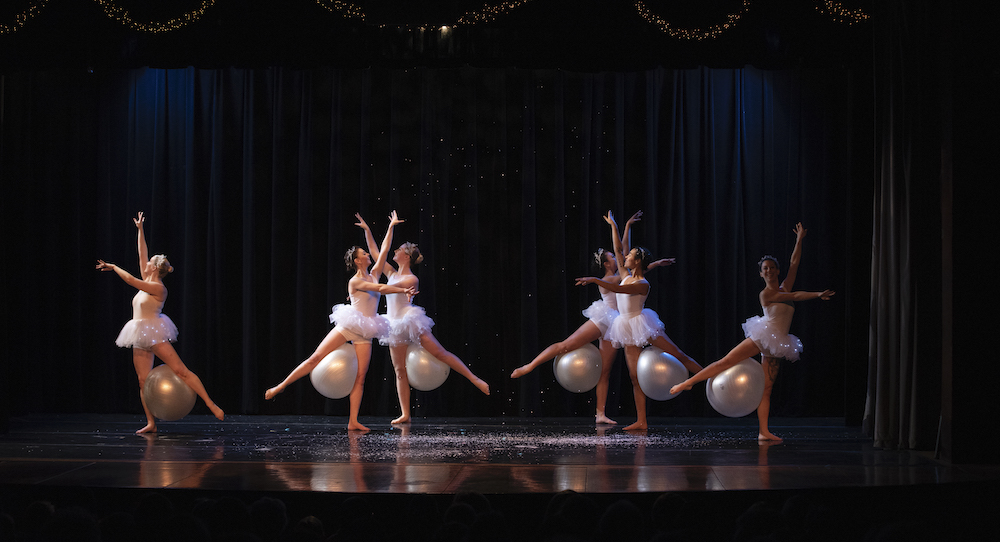 Every so often, dance lovers can find a gem of a dance company in an unexpected place — in a  small city, town or region without all that much wider-known cultural capital. CONNetic Dance of Hartford, CT, is one such company. Its Nutcracker Suite and Spicy, now in its 10th year, is truly a Nutcracker for and of the 21st century — from racial and stylistic diversity, to mixing up gender conventions, to a quite modernized concept and aesthetic. It seemed to be a delight for all ages attending.

Santa greeted audience members as they got seated in the theater, its side walls ornately and beautifully painted. Children, teenagers, adults and elders chatted in good spirits all around. The curtain opened on people gathering presents, wearing festive holiday clothing. The “ugly sweater Christmas party” soon began in earnest, this very contemporary concept making me giggle. Party guests partnered off and jived merrily, and others executed impressive break-dancing moves — signaling the further stylistic diversity that would come.

Clara (Kayleigh Crocetto) mingled with guests, elegant in movement quality, stage presence and her flowy white knee-length dress. She was clearly a mature woman, rather than a child, as in many Nutcracker renditions (easing any uneasiness some people feel at anything romantic implied within the story concerning her, paralleling a modern raised awareness around issues of consent and empowerment of women of varied ages).

Drosselmeyer entered wearing dark colors and a big cape — a common look for the character, yet this one was in a more modern style. The character’s common mysterious demeanor remained here, however, a feeling that lowered lights (lighting by Robyn Joyce) and deeper tones in the music reinforced. The Nutcracker (Alex Zarlengo) added a lightness but a grounding, with a warm yet assertive air to him. From partnering Clara to leaping high above the stage and far across, he was a beacon of strength and hope.

Overall in the show, music was electronica/rock versions of Tchaikovsky’s classic Nutcracker score, with a few versions of holiday classics (such as “Jingle Bell Rock”) in that same musical style mixed in. Parts of Tchaikovsky’s score typically matched with a certain part of the plot or variation in the ballet were sometimes matched with other scenes or dances. At first, this threw me off a bit, as someone who’s seen (and danced in) countless Nutcrackers. But I came to appreciate how — like a snowglobe — this approach shook things up and settled them back down somewhere new, just as many elements of this rendition did.

This “ugly sweater party” was a smorgasbord of movement styles. Some dancing was jive-inspired — paired off, energetic, and with lifts to make the audience “ooh” and “aah”. Breakdancing tricks juxtaposed classy low arabesques and strong, clean single turns. Sharp jazzy shapes had a presence too. It was clear that all involved styles had their own strengths and value to contribute to the whole experience.

In a carefree party atmosphere, Clara remained elegant and composed — her flowing white dress reinforcing her purity — yet also gentle and accessible. Lights dimmed down and music deepened. We met a large, exuberant group of “Snowballs” (a version of the conventional Snow dancers). On pointe shoes, and dancing rather classical movement, they impressively manipulated large white balls — for instance, bending deep to shift to another direction and still keeping the balls in between their heels. The effect was pleasing and memorable.

We were transitioning into the even more magical and zany offerings of Act II, as we moved into a nightclub setting. The Flowers entered, wearing big, colorful, and fun flower masks — exemplary of the show’s stylistic daring and aesthetic vivacity. We soon also met “Sugar Rum” (Tyler Brown), a talented male African-american breakdancer. His identity and his movement style seemed to be quite a divergence from that of traditional Nutcracker “Sugar Plums” — and it warmed my heart to see.

As society opens up to different representations of characters, we also recognize how meaningful it is for all people to see those who look like them in our cultural sharings. His inversions and other tricks were as smooth as they were physically daring. He wore a black and plum-colored track suit, perhaps an homage back to the original “Sugar Plum” character.

We met other dancers as drinks (fitting in the night club setting), such as the French Martinis (Leigh Schanfein and Elisa Jeffrey) with a tutu-clad dog (named Lucie, matching the dancers with their tutus). Not all of the movement in the show was balletic — far from it — but the two were on pointe shoes, and the movement matched the shoes. At the same time, there was a jazzy flair in how they danced that helped to build character and visual interest. They moved with an elegance and sophistication, but were also very human; later on in the work a theatrical bit of them trying to one-up each other played out, making me smile and laugh.

Carolyn Paine offered a Jade Mar-tea-ni (a twist on the Chinese Tea Variation), turning and leaping with joy and expansiveness. A big skirt and fun headpiece added to the large, loud presence of her dancing. The Candy Cane Twists (Joseph Beltre and Meghan Crocetto) offered memorable acrobatic tricks and “eat up the stage”-type leaps. They counterbalanced their weight to execute jaw-dropping tricks. There were absolutely no holds barred here.

The Coda, solos from the Nutcracker and Sugar Rum, were sandwiched in with these variations. Again, as someone who’s experienced countless Nutcracker performances, this change of ordering threw me off a bit. That’s a testament to force of habit and mental frameworks. Thinking more deeply later, I appreciated this mixing up of the ballet’s conventional order.

The ending was just as joyful and zany as much of the rest of the show, with the flowers waltzing through and other characters joining for a big, vivacious finale. With a pop and a bang, they hit an expansive ending tableau. Confetti came down — because who doesn’t love confetti? That’s not something that’s been commonly part of The Nutcracker — but if it brings joy, so be it, this production seemed to say.

This was a Nutcracker for the 21st century — across issues of aesthetics, race, gender, social dynamics, and far more. As art faces persistent questions of sustainability and cogency on a wider social scale, creating art wherein people feel at home — wherein they recognize a world they know — is an important consideration for the arts ecosystem. After all, is art not a mirror to society? Let’s gaze there.