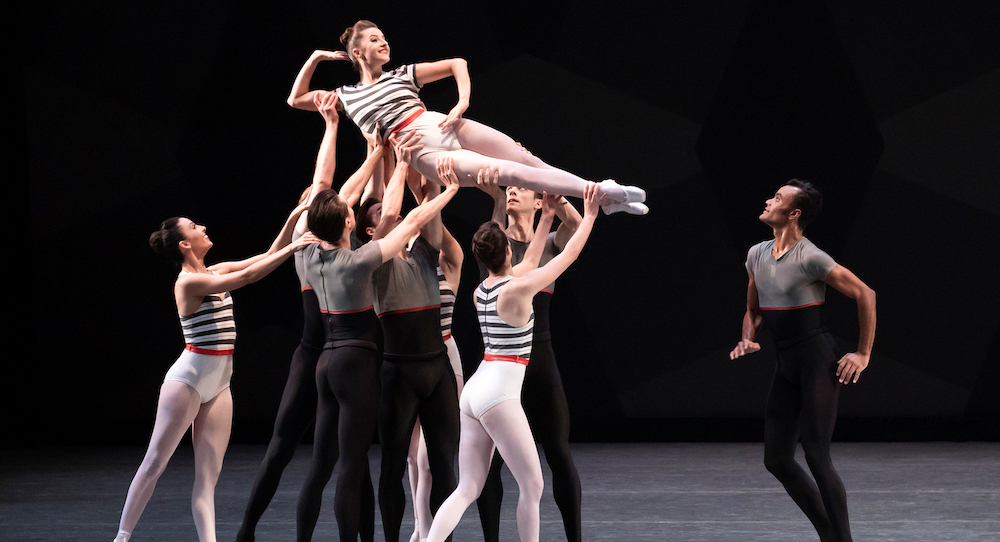 Highlighting the season will be the January 26th world premiere of Copland Dance Episodes, a new ballet by Justin Peck to the music of Aaron Copland, the dean of American composers. An abstract, non-narrative, full evening piece, performed without intermission, Copland Dance Episodes will feature a cast of 30 dancers and the NYCB Orchestra performing four of Copland’s most acclaimed musical scores: Appalachian Spring, Billy the Kid, Fanfare for the Common Man and Rodeo. The visual design for the ballet will be by the acclaimed American artist Jeffrey Gibson. A 2019 MacArthur “Genius Grant” Fellow, Gibson was born in Colorado of Choctaw and Cherokee descent, and is known for incorporating elements of Native American art and craft into his practice. The lighting design will be by frequent Peck collaborator Brandon Stirling Baker, who will be collaborating with Peck on their 30th production with this work. The costume design will be by former NYCB dancer Ellen Warren (Ostrom), who will be designing costumes for NYCB for the first time. Copland Dance Episodes will be the first original full-evening work created for NYCB since Susan Stroman’s Double Feature in 2004, and only the second full-evening, abstract work to enter the Company’s repertory since George Balanchine’s Jewels was created in 1967. In addition to the premiere on January 26, Copland Dance Episodes will also be performed on January 28 at 8pm, January 29 at 3pm, February 3 at 8pm, February 4 at 8pm, and February 7 at 7:30pm.

The second world premiere of the 2023 Winter Season, which will take place on February 1, will be a new work by dance artist and choreographer Keerati Jinakunwiphat, who is currently a dancer with A.I.M by Kyle Abraham, which she joined in 2016. This will be Jinakunwiphat’s first work choreographed for NYCB. In 2021, Jinakunwiphat participated in the Fall Working Session of the New York Choreographic Institute, an affiliate of NYCB, where she began to develop this work for nine dancers, which is set to two pieces of music by the Chinese-born, Pulitzer Prize-winning composer Du Yun: an excerpt from Run in a Graveyard and Air Glow, which received a Grammy nomination for Best Classical Contemporary Composition in 2019. The premiere will also mark the first time that choreography and music by female Asian artists have entered the NYCB repertory.

New York-based designer Karen Young, who has worked with many choreographers including Kyle Abraham, Pontus Lidberg, Benjamin Millepied and Troy Schumacher, will design the costumes, and the lighting design will be by Brooklyn-based designer Dan Scully. In addition to the premiere on February 1, the new Jinakunwiphat ballet, which will be included on a program with Alexei Ratmansky’s Voices and Peck’s Everywhere We Go, will also be performed on February 8 at 7:30pm, February 9 at 7:30pm, and February 11 at 2pm and 8pm.

The Winter Season will also include four additional works by George Balanchine: Allegro Brillante, Episodes, Firebird and Walpurgisnacht Ballet; two works by NYCB co-founding choreographer Jerome Robbins: Fancy Free and Rondo, which was premiered and was last performed in 1980; and Christopher Wheeldon’s Liturgy.

The Winter Season will close with a two-week run of the Company’s production of The Sleeping Beauty from February 15-26. The full-length staging, one of NYCB’s most lavish and elaborate productions, was created by Peter Martins in 1991, and is set to Tschaikovsky’s beloved score. With more than 100 dancers in each performance, including students from the School of American Ballet, the production features choreography after Marius Petipa and George Balanchine, costumes by Patricia Zipprodt, sets by David Mitchell and lighting by Mark Stanley.

All performances will take place at the David H. Koch Theater at Lincoln Center. Tickets start at just $38 and are available at nycballet.com,