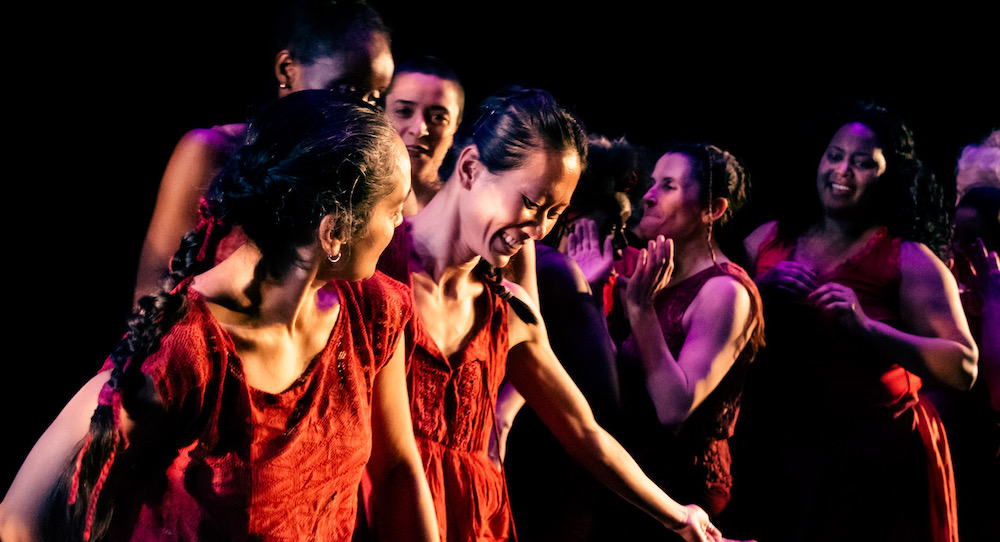 You can probably conjure the mental image: people moving together, in community, along with vibrant music. We have that at weddings and high school dances – and is that all? Indeed, the fundamental human experience of moving together with rhythm and sound as a guide — is that something that we’ve become all too disconnected with?

The internationally-reaching ANIKAYA Dance Theater’s The Women Gather, with Wendy Jehlen as director/choreographer, illustrated that quintessential human experience: in sound, in movement, in communal sharing. That blend had the potential to remind us of the beauty and power of what we’ve left behind.

The work established an avant-garde feel from the very start, with the ensemble moving in quite individual, seemingly improvisational ways. Wearing loose, earth-toned costumes, they lunged,  gestured, simply walked and much more. While moving, they intonated with impassioned chants.

Also in the soundscape was a score of a woman speaking (music direction from Shaw Pong Liu), as well as the percussive foot stamping of some of the dancers. Soft reddish light bathed the space, and soft red set pieces also hung from the ceiling, stringed and shapely (installation/textile art from Marlene Santana, Raquel Flor, Annie Wiegand and Grace Keller).

Intriguing things slowly developed, such as a pair of dancers turning around each other while resting their head in the crook of the other’s neck. The performers were mostly absorbed in their own experiences, versus directly interacting with each other – yet there were some moments of such overt connection. There was always connection in the space, however — airborne and permeable.

Soon, one dancer began singing, in a strong and clear voice. Most of the group paused and faced her. The space kept room for individuality and non-conformity, however; a pair of performers continued moving. Finding more overt commonality, the group joined her in singing. At the next inflection point, like a clear and effective paragraph break, the ensemble shifted into more circular movement. Concentric circles of dancers moved around an invisible center, creating a feeling of ritual in the space — something ancient and powerful.

Another paragraph break had the singing ending and the space going silent, except for the sound of breath. Dancers slowly softened to the ground, and the sound of just one of breathing heavily rung through the space. Surrounding that sound was that of deep, smooth exhales – the soundscape still full of layers. Calm enveloped exertion. Jehlen created many such little sections, not so short as to feel choppy or underdeveloped but not so long as for anything to start to feel stale — a good balance, and one with intriguing choices for separate moments of action within the group.

As the lights came down (lighting design by Annie Wiegand), and the space notably dimmed, I thought about cycles: how all things experience night and a time for sleep. Singing re-entered the soundscape again, this time soft yet in a way haunting, as the dancers began to slowly rise and move. They rippled like seaweed in a gentle ocean current. As they moved and sang softly, together, it felt like a mutually supportive community had emerged.

Soon, the singing, which had been soft and hum-like along with the witnessing, shifted into louder and much more staccato calls. Then, on a dime, it stopped. That cycle continued, the singing rising and then abruptly stopping: speaking to the cycles of ritual, community, spirituality, and connection with earth, themes that resonated through the work. Underscoring such themes, one dancer soon went through a process of standing just outside the group and then moving past them in a line, over some of their backs. Others in the community witnessed and chanted.

Another dancer began to move to and fro, as if filled with an outside force or spirit. The group surrounded her and, in turn, blew on her – and that alone caused her to move. That evinced fragility, but she was also contained and held by the group. Speaking to rebirth and renewal, she found a new power; without touching them, her spacious movement pushed them back.

Then, no longer with one singled out from the group, they were all drawn to a force bigger than themselves – moving together as a flock, as if moved by an outside force, from one area of the stage to another. They then separated and move slowly, perhaps even overcome by that force bigger than them, encoutering its power.

Soon the ensemble found a seated circle, with one performer signing and another dancing in the middle. At certain points they drew closer to different community members in the group, gesturing and acknowledging. The deep anthropological significance here, the deep ties to human history (and pre-history), were not lost on me.

The next section had just as much anthropological significance; audio came up and dancers rose, in turn, to walk to a section of the stage with cups and water. They undressed down to their undergarments, and then begin to wash with the water. These are ancient communal human behaviors of care – of self and other. In small groups and pairs, they braided each other’s hair and gave hugs of gratitude and recognition. They dressed again, in red garments this time: red, as a continued theme or aesthetic choice in the work, returning.

Newly dressed, some sat on the perimeter of the space and faced into the center. One dancer began to move, gesturing and percussing with her feet – leading some sitting at the perimeter to rise to their feet. It felt almost like a call to action. What action? Next, they moved to a circle to form a cypher. That deepened the anthropological depth and meaning here: peoples gathering to watch one another move in a circle, reflecting the path of the star in our sky that provides for all life, in ancient societies and into Indigenous communities still existing today.

Different women came in and out of dancing in the center, and all had a chance to be witnessed. Those around the edge clapped and chanted, to illustrate that close witnessing. Before long, the dancers were moving together in a long line, in full unison for one of the few times in the program. Individual and community — both are valid and both are important.

Enhancing the ritualistic sense at hand, they undulated their spine forward and back as well as lunged deep — maintaining connection to earth but also to sky. They came to a circle where they grooved out, enjoying their own movement and then bowed (as a group and individually, the latter with space for their own movement or sound). This ending brought a sweet, connected, joyful feel – something that we can all use in an all-too negative and uncertain world.

Bringing even more connection, after the bow, Jehlen called all audience members to come to the stagespace and draw (art supplies provided). This felt like a wonderful way to engage audience members in embodied making, in a way that could be more accessible to all (some might not feel comfortable moving, and disability access is an important factor to consider).

Granted, and admittedly, the unapologetically avant-garde approach of The Women Gather might not be everyone’s cup of tea. Yet, no one could say it wasn’t crafted with thoughtfulness, dedication and true care. And for me, how this program underscored the deep human roots of sound, movement and communal sharing of those things – it made my heart float. We in modern life, by and large, have become disconnected from how fundamental and beautiful those things are. Let’s reconnect. Thank you to ANIKAYA Dance Theater for helping us step closer to that!