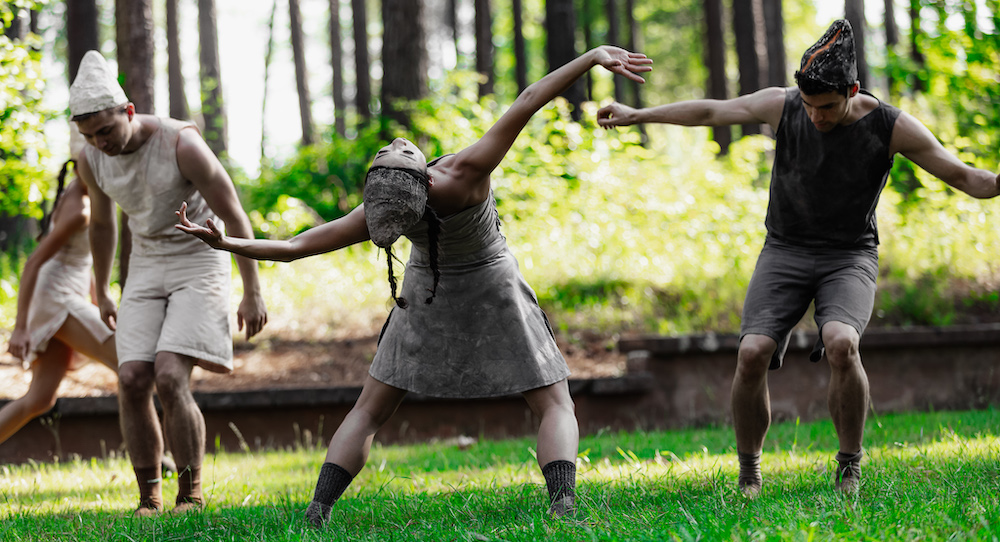 “One mountain, many paths” goes the saying; there are most often varied approaches toward one goal. Taking in Artists Climate Collective’s 2022 Art to Action program, I saw this multiplicity in action; all works in the program were under the same umbrella in objective and worldview, but were quite distinct stylistically. The creators of each of the program’s four pieces, from all around North America, clearly committed to an intentional vision. All collaborators then realized that vision with deftness and creative ingenuity.

Artists Climate Collective is a nonprofit that leverages dance and other art forms to raise awareness and inspire action around climate change and other environmental issues. Aligning with the multiplicity of the program, and the environmental movement itself, the group does everything from sell sustainable dancewear and kitchenware to present film programming. It’s all towards the mission: one mountain, many paths.

The program kicked off with ČIŠƐT, directed and choreographed by Cameron Fraser-Monroe, an intriguing piece standing ground for the importance of Indigenous leadership, history and deep ancestral knowledge within the environmental movement. It began with a quote poetically distilling that idea, on starting the work toward environmental justice by following Indigenous wisdom.

Continuing to distill something so multifaceted and rich, the piece was minimalistic overall. Two dancers (Emily Solstice Tait and Cameron Fraser-Monroe), in earth-tone yellow and white, moved together on a volleyball court (complete with net and sand, contained in a rectangle shape). A score of Indigenous ritual chanting mixed with more modern rhythms (from Intertribal Happy Feet By Cris Derksen and featuring Chippewa Travellers) accompanied them.

The two dancers separated by the net at first, I thought about the fractured nature of the Indigenous experience in modern Western culture: the deep roots of your tradition and culture within view, within knowledge, yet all too often separate from your experience as someone living in the contemporary world. There can be shifts in that dynamic along with life’s ebbs and flows, however, and after a time the two dancers switched places.

Their movement was fluid and continuous, serpentine yet not overly curvaceous: arches reminiscing crescent moons and curved tree trunks that have weathered decades of storms, for example. Reaching high toward the bright sun at times, surrendering into the mini dunes of sand at others, they found both firm foundation and spacious lift. There was just enough understatement in the strength that they applied to leave me wanting more – riveted, really.

In a particularly memorable moment, caught with a skillful camera angle (from Director of Photography and Editing Michael Osikoya, Visual Soul Studios), they curved their spine laterally in opposition (one right, one left). Two halves made a whole, created balance.

Also poignant were instances of the dancers picking up sand and then letting it siphon slowly through their fingers. I thought about loss of deep connection with the very material of earth, that which is fundamental to Indigenous identity, history and culture.

They clawed at the net at other points: striving to move past, to escape confinement. These choices were evocative, yet in no way overbearing: enough to speak, but also to open space for tributaries of meaning that can nourish near and far. Minimalism reverberated throughout the work in these ways, making something clear and cohesive – if also certainly rich and nuanced. As the piece concluded, I was so pleased that this Indigenuous representation began the program. Saving our Earth begins by looking towards those who know how to live with it, not against it.

With Time to Go, with original choreography from Yuri Zhukov and film adaptation from Emma Rubinowitz, reflected natural harmony and balance within the body and with the natural world – Isadora Duncan-style. In an expansive space, with walls of light wooden color and texture, dancers stood back to back in a circle and facing outward. Aligned with the colors all around them, they wore earth tones.

They gestured, slowly and fluidly, and occasionally lunged. Their movement gradually picked up size and speed, and they left the circle – yet they didn’t lose pedestrian understatement. Even moments of virtuosity rested on a foundation of breath and use of momentum, rather than muscular efforting. Taking thoughtful time to do so, the ensemble moved out across the space, with easy turns and lunges: sometimes in unison, sometimes independently.

Formations frequently changed – but the dancers took up space well, so it felt visually clear rather than frenetic. I thought about an ecosystem’s organized freneticism here: so much going on, but all in a dynamic, finely-tuned balance. In one section, one dancer moved quickly, another moved more slowly, and another was paused – simply being: diverse states of being in balance. Videography from Jettison Creative adeptly captured all of these dynamics.

Overall, I felt an Isadora Duncan value system alive here — moving in accordance with the truths of the body and of the Earth. Some might argue that that’s what we need to return to in order to save our planet. Through another lens, harmony is what all of that made me feel. Regardless of any larger message toward action, art can offer many things, and that harmonious feeling within us can be one of them.

The ending also brought me hope, as well, with the dancers reaching up and out. We can find new possibilities if we reach towards them. With this being the same formation as the beginning, a sense of timeless truth was also in the ether. Close-ups of each dancer toward the end additionally reminded me of humanity and individuality.

We can’t, and don’t have to, lose those things as we are in harmony with the wider collective; circling back to that idea of ecosystem, we can have co-existence of bountiful diversity. The title also felt indicative of another important message: with time, we progress. Yes, we face a ticking clock in many environmental issues, yet Rome also wasn’t built in a day. Just as dancers in this piece showed us, we can take our time and be mindful as we build wonderful things together.

Makino Hayashi’s The Message similarly reflected natural harmony, the balance of the natural world in which it was set. On an unmanicured beach, dancers moved with strong, weighted gestures. Moving from their shoulder, it was almost like they were being moved from an external force. With musicality nothing short of stellar, the ensemble was keenly attuned to textures and rhythms of the electronica score (from Micheal Wall). There was tension in the atmosphere, but at the same time an integration and unspoken understanding in the group. It almost felt as if they were connected in common purpose towards a larger aim.

The energy softened at one point, with a new score. A resonant duet had the same clarity in shaping and wonderful musicality – yet less accent and more fluid, internally-driven movement. The duet partners swayed with wave ripples behind them: a breathtaking image. Panning farther out, later three dancers moved together: two higher up on the beach and one by the shore. That was a lovely image in a different way, through spatial cohesion and clever organization of moving bodies.

Skye Stouber’s cinematography brought other entrancing images: such as a close-up of feet in the sand, en relevee (heels raised), toes spreading wide to ground into the sand. With enigmatic smoke blanketing the beach, and in another evocative use of close-up, we saw one hand carrying a plant to the water. There the piece concluded – sparking questions of what might be. What might become of that little plant? Will it bloom and grow tall towards the sky? Perceptive audience members might have seen a question here of how they’ll walk forward, what seedlings they will plant and what they will nurture as it grows.

Darian Kane’s Dear Roots; An Interview closed out the program, a work of a notably unique approach and one nimbly executed. Offering a visual of dazzling scale, the work began with an overhead shot of a labyrinthe structure. Zooming in, a group of dancers picked up little cones for their heads and walked to a grassy area. A voiceover, speaking as one of them, explained that they’re mushrooms. Like a skillful teacher, he described their job in the ecosystem through metaphor: “communication specialists among plantlife.”

As he spoke and educated us more, the ensemble’s movement followed narrative – yet not in a hokey way; it stayed smooth and cohesive, and even had comical moments (that the dancers exeuted beautifully). With education, humor, and site-based dance all coming together, the work was really testing the boundaries of the possibility in notable ways. As another magical trifecta – one that became more than the sum of its parts – gesturing, theatricality, formations all cohered in a lovely way. The site, with towering trees and shining green grass, was a cherry on top of all those satisfying elements.

A tonal shift brought something more mysterious and reflective, and more technical movement with it: lifts, extensions, leaps, turns. This movement, eating up space, spoke to bridging gaps and making connections happen. After all, the voiceover noted how the mushroom’s messenger role is a “dance” that keeps all plantlife in symbiosis. Movement vocabulary also reflected the mushroom’s connective role, with lifting, reaching, and transferring weight. While shapes stayed crisp and definitive, the movement was also beautifully continuous. That’s nature’s fluid balance.

This section also came with a new score, making my mental wheels turns with its pinch of a fairy tale feeling. With plants coming alive and dancing, as well, there was something fantastical about the work. There were indeed these cultural allusions, and the piece evinced stylistic legacy, even as it was so forward-thinking. The old and new: additional forces in this work that, when in balance, created harmony and health, just as they do in the natural world.

An ending section offered a duet with a dash of jazzy suave. Elements of the proverbial romantic “chase” at hand, put on fauna forms, were intriguing and comical. Smooth jazz dance rudiments included isolations and accenting – even while the movement vocabulary was overall grounded in contemporary ballet.

Other mushrooms entered before long, and their mushrooms hats rested on a brick wall as they crouched down below it. They were back to their best mushroom lives after teaching humans about themselves – and then the piece concluded. I questioned for myself if that final ensemble section could have been more effective drawn out – yet I also thought that the quick shift into realism (with just mushroom hats showing) helped to build a continuous feeling. It all goes on. There’s no need to make a big thing of a conclusion if there isn’t really one.

So too does our work to save the only home that we have, this big blue and green orb spinning through space; it goes on. Just as with Artist Climate Collective’s 2022 Art to Action, diversity is our strength. We all have a part to play: from activist to Indigenous leader to artist to elected official to engineer to tech entrepreneur. We all have fresh ideas and meaningful gifts to bring. In all of that, let’s not forget the place of aesthetic force and fresh ways of seeing; art matters in the march forward (another vital reminder from this program!). With creativity, open eyes, and hungry minds, onward together.