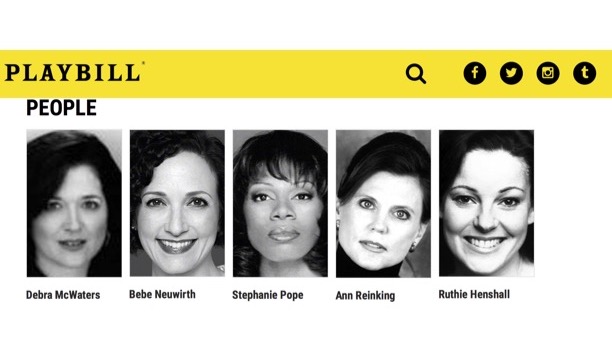 Annie and I are in NYC, and it’s time to run. We have so little time to get this show up and running. We had done a “skeleton” crew for a few days prior to this in order to work out a few numbers, such as “A Tap Dance”, “All That Jazz” and “Cell Block Tango”. We had wonderful dancers who took time to join us, including this wonderful little gal from Broadway Theatre Project (BTP), Angela Brydon. These people were not guaranteed a role, and, in fact, many did not get this job, but they were wonderful and helped us to accomplish so much. Of course, in some cases, we were fortunate enough to have the real deal there.

The principals were amazing. Jimmy Naughton, who played Billy, is handsome and has a voice that is smooth as honey. His issue, at that time, was needing to run through the lyrics of “They Both Reached for the Gun” before each show. So, in all my glory, each night, I would go up and sing the part of the reporters. He, of course, was brilliant. I, of course, was not.

What can I say about Joel Grey that hasn’t already been said? He is just as amazing as you think he is. He is small and compact. He carries this lovely, calm smile on his face. He wears wire rims as he reads his script. He’s sharp as a tack. He loves photography and is constantly snapping pics of people backstage.

Marcia Lewis, Mama Morton, could not have been kinder or more loved. She was lovely to everyone. When that voice came out, it was a shocker! David Sabella, what can I say about David Sabella other than that he has become one of my dearest friends, and I admire him so. This amazing vocalist blew everyone away with both his voice and his ability to truly fool you after he waltzed around the stage as Mary Sunshine, then came out at the end half dressed as a guy with a stogie in his mouth, talking like he’d just taken a break from playing a round of poker.

Now, Annie…Roxie…perfection. When I think of her performance at Encores!, I think of the icing at the bottom of a wedding cake that is very thick and sitting on the platter? It’s an odd analogy, I know, but for me it’s the best part of the cake – it’s sweet, you can swoop up just so much of it with your finger and it looks so beautiful on your finger and takes so sweet and you keep wanting more. Well, I keep wanting more, anyway. She was like Jessica Rabbit. She was the bad girl you loved to dislike. There were no redeeming qualities there, but you loved her anyway. People also thought that Roxie was not intelligent. However, as our most amazing Director, Walter Bobbie, used to say, a breeze would blow and Roxie’s head would blow this way and a breeze would blow from another direction and her head would blow in that direction, but she was sharp as a tack. I doubt that anyone will forget the Roxie monologue.

I mentioned Walter Bobbie above. I have never met a kinder, wittier, more intelligent man (other than the men in my family). We traveled the United States and the world together, and I never saw him lose his temper or raise his voice. He would always go to the actor, put his hands on both shoulders, look into his or her eyes and quietly give the note! I remember two things about Walter that make me smile. When we were on Broadway, and it was a particularly difficulty time as it was the interval of time when Tony voters come, he came to me with that same stance and told me how important I was to this Project. It was so appreciated. It had been a hard ride. The second memory of Walter took place in London, when we were walking across the bridge after watching Guys and Dolls. It was so quiet out. All of a sudden, Walter started softly singing “Inch Worm”, a childhood song. As a child, I had learned the song to be sung with that song “2 and 2 are 4” and honest to God, I started whispering it because we all know I’m no singer. Slowly but surely, I got a bit louder until you could hear the harmony. It is one of my favorite memories to date.

Another favorite in my life is Rob Fisher, music director extraordinaire, who is also a botanist. Now, we all know that the academic part of Rob was screaming out to the academic side of me. However, music was the thing. He was another funny guy with a sharp mind. We had a creative team that was smart and oh so much fun.

During our short run, as each day passed, it was clear that there was more murmuring in the audience each night after the performance. The excitement was wild. By the time we closed, we knew we were going somewhere. Fran and Barry Weissler, our producers, came up to me after the party we had and told me not to go too far away because it looked like we were headed for Broadway!