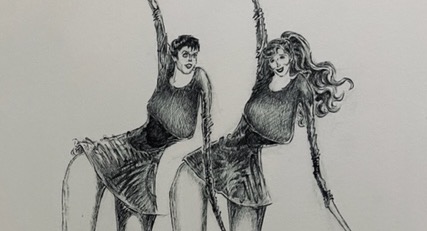 One night, Annie and I were sitting at a dinner table in downtown Tampa, waiting for several members of the Board of Musical Theatre Project (MTP) to join us. I can remember buttering my roll when Annie, in an extremely nonchalant manner, asked me if I wanted to be her Assistant Choreographer on Chicago at the Encores! Series in New York. The water glass was to my right, and I remember almost knocking it over as I tried to contain the excitement and seem cool, keep my voice from shaking and thank God for finally giving me my dream of a lifetime. It took me a nanosecond to say, “I’d love to, Annie!” No, I wasn’t cool. I had yet to learn how to act that well. She knew I was excited, grinned and buttered her roll.

Leaving my 18-year place of employment was not a piece of cake. There were ramifications due to many complicated factors. Suffice it to say, however, that this lovely group of people had Tony parties when Chicago’s turn came up, called about tickets and stayed in touch.

Cutting to the chase, it came down to the fact that it was necessary for me to leave my job in order to do Chicago. Now, this was a crapshoot. Let me explain what Annie was asking me to assist her on.

Tickets to the Encores! Series is one of the most coveted of tickets one can get in New York. What this theatrical group does is take shows that are rather obscure. By that, I mean shows that have not been thought about, most likely, in years…not been revisited. They felt that since Chicago had such a short run against the runaway hit, A Chorus Line, in the ‘70s, they’d dust it off and put it back up on the stage….but in Encores! fashion. Now, what does that mean? Usually, when a musical is done by Encores!, no costumes are used, no sets are used, and the cast carries their scripts in their arms. Singers come downstage to sing their songs. The rehearsal time is two-and-a-half weeks, and the show runs Thursday, Friday, Saturday and Sunday of that last week. When Annie and I worked on any new show, we always did a workshop and used what we called a “skeleton crew.” We did the same for Chicago. That made the rehearsal time much easier, as the work was mostly done. The crews were made up of dancers from NYC, and usually there was at least one MTP/BTP student in them.

When it came to Chicago, the plan was to go in an entirely different direction. So, the bandbox on the stage that becomes a crucial part of the Courtroom Scene, began at Encores!, as did the costumes that you see today. The difference is that for that production, they “shopped the street.” There was no lengthy fitting session; in certain instances, they saw what people wore to class, and costumes were loosely based upon that. Today, certain styles are still there, but they have been tenderly “built” by William Ivey Long….a love of a man. Finally, yes, we used those huge music books in arms, although Annie fought it. No one walked downstage to a mike to sing. As always, Annie was clever and used the books well. For instance, in “Cell Block Tango,” at the end of a cell block murderess’ monologue, she’d slam that book shut with a vengeance! They held the books, but we never referred to the books.

Before we even left Tampa, Annie called wanting to ask my opinion on something. Liza Minelli, who was to play Roxie, was not able to do it, and Annie was being asked to reprise the role and choreograph the show. She said that she did not think it was a good idea. I told her, “YES! DO IT!” And she did.

Before starting work on Chicago, we had another job. We were going to choreograph a piece for the Joffrey Ballet. Given that I am as far from being a ballerina as one can get, this seemed like a wrong turn. However, the music was “Sentimental Journey,” and Annie’s idea was not that of a ballet.

Here is where I learned my first two lessons: Don’t be surprised about anything. Be prepared.

As we were walking to the studio from our hotel, Annie said, “You know, I want you to choreograph a portion of this.” I almost dropped dead right there. What a nightmare! However, she actually did because she thought my style of choreography would fit what she wanted in that particular section and with that particular piece of music.

I am not the type of choreographer who can walk into a room and immediately see patterns and steps and a concept and fill all of that with the right people. I am the type of person who is driven by the music, listens to it countless times while lying down with headphones on. I then mark the music in my own fashion, make notations all over the page having to do with musical instruments, impulses and mood. I group how much of the piece I am going to do each day, and then I think about the story. Mine is a much longer process than Annie’s. Not that day, however! Luckily, there was a piece she liked of my work, and she asked me to use that because it was perfect for this section. I took it and had to tailor it, but it worked. We put the entire piece together. Gerald Arpino saw that the entire show was put together. We ran to Washington, D.C., and performed at the Kennedy Center. My mom and dad and, of course, Marcus (my husband) flew up to see it. It was a wonderful learning experience.

Before I get into the guts and glory of Chicago, I will say a few words about the other show that we did actually while we were in the relative beginning of our Chicago journey. The show was Applause! This show was being done for Paper Mill Playhouse, readying itself for a tour, with the final move being to Broadway. It starred Stephanie Powers. Now, this was a terrific but dated show, and Stephanie was a woman with a good deal of talent who had done stage work but was most suited for the television screen due to her great success in that medium. Her homework was in, not only learning lines and blocking, but in learning how to play to a live audience again, in a much larger way (that was convincing), in one “take”. The people who worked on this show were Annie and I; that wonderful director, Gene Saks; Adolf Green and Betty Comden; Charles Strouse and Lee Adams; and the producers, the Weisslers.

I remember rehearsals being a mix of good and rough. There was so much fun from the dance aspect, however.

One song for this show had some ridiculous lyrics for the chorus, but Annie made the dancing match them, and it turned into the most enjoyable number in the production. I’ve added a very famous version of this with Lauren Bacall doing the lead. (The setting in this version is a gay bar. Ours was in a nightclub.) A lesson to those who long to be choreographers is that you don’t ignore what you don’t like in a story. The only way to be a good choreographer is to go with the flow and make each number better than what you’ve been given. We did that and, thus, the dancers loved it and enjoyed it.

The dancers! This show is where we met many of the dancers who would populate our future shows for years to come and others who were just darn good: Lynn and Marc Calamia (although they were not married then), Greg Butler, Dylis Croman and Mark Arvin (both from BTP), Denis Jones, Belle Callaway, Deidre Goodwin, Jenny Lynn Suckling, Lisa Mandel, Sharon Moore, David Parker, Stepp Stewart, and Bruce Moore.

The show was not meant to be and closed on the road. However, I must say that I wasn’t in Tampa when Applause! played there, but it must have been quite a sight when, during the set change (which happens right on stage in a slick fashion) and the bed was to move from stage left to stage right with Stephanie Powers sitting on it, it went from stage left to right off stage right, and there went Stephanie and the bed.

That, my friends, is live theater!