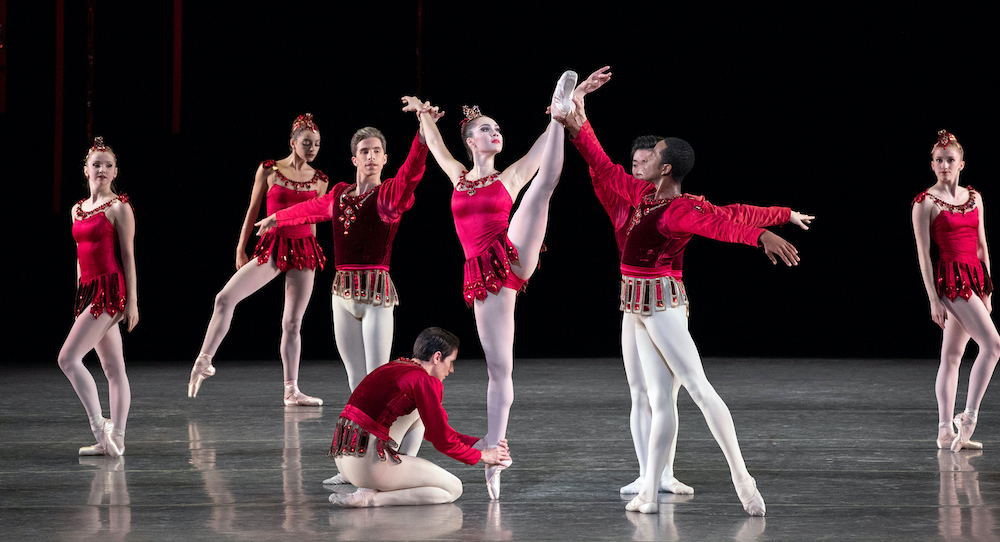 New York City Ballet (NYCB)’s 2022 Spring Season will open on Tuesday, April 19, with a program featuring two works by the Company’s Co-Founding Choreographers – Serenade by George Balanchine and The Goldberg Variations by Jerome Robbins. The season will continue for six weeks, through Sunday, May 29, at the David H. Koch Theater at Lincoln Center.

The centerpiece of the season will be a two-week celebration of the 50th anniversary of NYCB’s legendary 1972 Stravinsky Festival, which will take place from May 3 through May 15, and feature 14 ballets to Stravinsky’s music, as well as two orchestral works performed by the New York City Ballet Orchestra led by the Company’s Music Director Andrew Litton.

The Stravinsky anniversary celebration will also feature a world premiere ballet created in tribute to Stravinsky and Balanchine’s landmark works by former NYCB dancer Silas Farley, which will premiere on May 5, as part of the Company’s annual Spring Gala. This will be the first piece that Farley, who is now the Dean of the Trudl Zipper Dance Institute at the Colburn School in Los Angeles, has created for NYCB, and the ballet will feature 16 dancers with costumes by Cassia Farley and lighting by Mark Stanley.

The score for the new ballet has been commissioned from composer and writer David K. Israel who throughout his career has worked with such artists as Leonard Bernstein, Jerome Robbins, Paul Taylor and Twyla Tharp, among many others. Israel’s score for the new ballet is based on a 1946 musical exchange between Balanchine and Stravinsky, in which Balanchine wrote an acrostic poem in Russian as a gift for Stravinsky’s 65th birthday and set it to a simple melody. Stravinsky then harmonized the melody as a gesture of gratitude for Balanchine.

The title of the new work is Architects of Time, which is taken from a quote that Farley and Israel heard in the documentary film, In Balanchine’s Classroom, in which the choreographer said, “Composer is architect of time, and we have to dance to it.”

The Spring Gala performance will also feature three additional works, all of which premiered during the 1972 Stravinsky Festival: Balanchine’s Scherzo à la Russe and Stravinsky Violin Concerto, and Robbins’ Circus Polka, which will feature 48 students from the School of American Ballet. The May 5 gala evening will be chaired by Diana L. Taylor, Chair of the NYCB Board of Directors, and Liz and Jeff Peek, the President of the NYCB Board of Directors.

The two-week Stravinsky Festival will also feature performances of Balanchine’s Symphony in Three Movements, Duo Concertant and “Divertimento” from Le Baiser de la Fée, all of which were created for the 1972 Stravinsky Festival, as well as Agon, Apollo, Orpheus, Firebird and Rubies; Robbins’ The Cage; and Justin Peck’s Pulcinella Variations and Scherzo Fantastique.

The Stravinsky Festival will also feature the NYCB Orchestra performing two scores by the composer – Fireworks and Suite No. 2 for Small Orchestra.

NYCB’s landmark 1972 Stravinsky Festival, which took place one year after Stravinsky’s death, was planned by Balanchine as a celebration of Stravinsky’s 90th birthday. The composer was Balanchine’s principal musical collaborator from the time they first met in 1925. The 1972 Stravinsky Festival took place over the course of one week, June 18–25, 1972, with seven performances devoted exclusively to the composer’s works featuring 30 ballets, including 20 world premieres, and an additional four Stravinsky scores performed by the NYCB Orchestra.

The 2022 Spring Season will also feature the world premiere of a new work by Pam Tanowitz, the New York-based choreographer and founder of Pam Tanowitz Dance, who will be making her third original work for NYCB.

The new Tanowitz ballet, which will premiere on April 22, will be set to “Law of Mosaics”, by composer, singer, bandleader, recording artist and two-time finalist for the Pulitzer Prize for music Ted Hearne. For all Spring Season performances of the new Tanowitz ballet, the NYCB Orchestra will be conducted by Hearne as they perform his score, which has also been performed by the Chicago Symphony Orchestra, San Francisco Orchestra and Los Angeles Philharmonic. The ballet will also feature costumes by Reid Bartelme and Harriet Jung, and lighting by Brandon Stirling Baker.

LeWitt will also extend her stage designs for Partita to create additional site-specific sculptures that will be installed on the theater’s Promenade for the re-launch of NYCB Art Series, which returns this spring. Since 2013, NYCB Art Series has featured acclaimed site-specific installations by artists FAILE (2013), JR (2014), Dustin Yellin (2015), Marcel Dzama (2016), Santtu Mustonen (2017), Jihan Zencirli (aka Geronimo) (2018), Shantell Martin (2019) and Lauren Redniss (2020), and has been a powerful vehicle for attracting new audiences to the Company’s performances.

Other Spring Season highlights will include Robbins’ Afternoon of a Faun, The Four Seasons and Piano Pieces, last performed by NYCB in 2008. The season will also feature Balanchine’s Allegro Brillante, The Four Temperaments, Divertimento No. 15 and the full-length A Midsummer Night’s Dream which will close the season with 10 performances from May 21-29.

The final performance of A Midsummer Night’s Dream on May 29, at 3pm, will also be the farewell performance for Principal Dancer Amar Ramasar, who will dance the Divertissement in the ballet’s second act to conclude his career with NYCB which began in 2001.

This spring, NYCB will also present a series of public programs for both children and adults designed to give audience a closer look at the Company’s repertory and artists.

These programs will include a special Inside NYCB presentation exploring the music of Stravinsky and the composer’s historic relationship with Balanchine and NYCB. The presentation will be hosted by NYCB Principal Dancer Russell Janzen and take place on May 16, at 6:30pm, at the David H. Koch Theater.