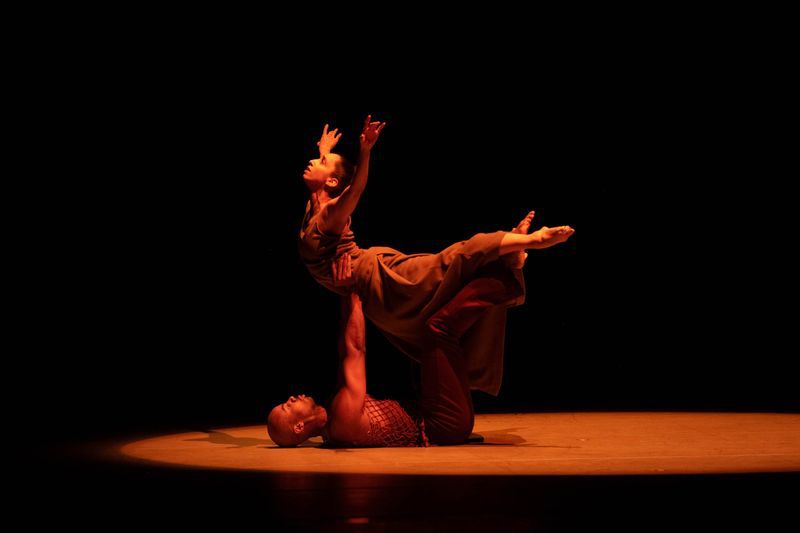 Walking through the streets of Manhattan on my way to take in Alvin Ailey American Dance Theater’s 2021 season at New York City Center, I looked around at all of the holiday lights, trees, bows and wreaths decorating streets and buildings. It made me have tradition on my mind. I’m not one to sentimentalize tradition, but there’s something about the holiday season that can lead all but the most hardened of hearts to have fond memories of years past and cultural touchstones that have lasted generations.

I was also simply happy that we were at a place with COVID that the company could continue with its own tradition of a December City Center season (although the company did have to cancel the remainder of the season).

I thought more on tradition while (and after) experiencing the program of three Alvin Ailey works; typically, I remembered, for the City Center season the company often commissions a contemporary choreographer or choreographers and presents their work along with Ailey’s. That always delivers something special, yet – from where we stand now in 2021 – enjoying a work literally full of Ailey’s work felt instructive, and even comforting in certain ways. Innovation is essential, but, to my mind, so is remembering and keeping alive what has come.

The program kicked off with Memoria (1979), Ailey’s dedication to “the wild spirit of my friend Joyce Trisler.” Multifaceted aesthetically, the work brings the main character (danced by Constance Stamatiou) through a journey – yet the nature of that journey is wonderfully open to interpretation. It began rather celestial and ethereal, costumes white and flowing (by A. Christina Giannini) and lighting (by Chenault Spence) in light blue tones. The movement met that aesthetic through repetition and a continuous, fluid quality.

Choreography was highly shaped and, although slower in tempo overall, had moments of accent. Although with frequent grounding, lifts were also frequent, bringing flight to mind. The movement, at least in this beginning section, also seemed to me more balletic than much of Ailey’s work – offering a chance for the ensemble to demonstrate their considerable classical virtuosity.

This ethereal atmosphere wasn’t cherubic or sticky-sweet, however; darker tones and those stylistic contrasts instilled something more complex. With all of this, in combination with program notes on Ailey’s intention with the piece, I thought about life after death. Those darker tones brought to mind for me the uncertainty we can feel in our complete lack of knowledge on what life after death is really like.

Another interpretation evolving in my mind, also growing from those program notes, was that of an artist’s journey: coming from a place of curiosity, earnestness, and generosity and experiencing many treasures along the way as a result of those qualities, yet also experiencing the obstacles that the modern world throws in artists’ paths.

In the face of those challenges, these beings – creative and spiritual in their essence and aura – found individual interests and generativities through non-unison. At other times, they found commonality through unison movement: commonality that reflected their shared and undeniable truths and interdependence.

These qualities skipped along with high and meandering notes emerging in the score.A solo from Stamatiou also epitomized these qualities, yet she brought a new and hopeful lightness. Pleasantly, she let the movement move through her and work its own magic – acting as an attuned and honest vessel for it as well as for her character.

Later, the ensemble turned to face upstage. The creative spiritual beings surrounded the main character as if in protection and support. Slowly, she walked upstage. In the air was the sense of a weighty passage, approached with the gravity that it calls for. She soon returned, in the new costume of a fiery red dress – further instilling the sense that what had just happened was pivotal. It wasn’t only her dress that changed; a whole new fiery aesthetic took the stage, full of various reds and oranges. To match, jazzy inflections grew in the music and movement.

The ensemble formed two long and parallel lines, diagonally traversing the whole stage and thus creating a passageway for the main character. It also seemed as if she had no choice but to travel through this passageway. She moved through it – yes, seemingly not without fear, yet also with her heart shined skyward and her presence grounded but also supple and fluid.

Was this the passage through to the afterlife, or an embodiment of the struggles of the creative life, or something else entirely? As is true with abstract art at large, far be it for anyone to say any interpretation is “wrong” – and I know I, at least, wouldn’t have it any other way. Even with any or all of that not perceived or not of interest to a given audience member, the sensory feast at hand was more than enough to greatly appreciate – even delight in.

She ultimately made it through this journey of challenge and then triumph, standing firm and proud in her truth. Perhaps reveling in this triumph, her movement and overall presence took on a new pride and sultriness, jazz tones also rising even more in the score (music by Keith Jarrett). She, and the whole ensemble, joyfully moved through sultry isolations and serpentine undulations.

A much larger ensemble soon joined, including students of Ailey II and The Ailey School (a wonderful opportunity for these young dancers!), to join in the soulful celebration. A rainbow of dancers, wearing costumes of myriad shades and hues, completely filled the stage.

This was undeniably joyful and soul-stirring, yet – more as a general question to the craft of choreography — I wondered to myself if there’s ever a point where too much is happening on stage; if, after reaching a point of diminishing returns, can it ever become overwhelming to audience members? That was more an intellectual musing for me, however, as I absolutely delighted in what the stage was offering, in all of its vibrancy.

I enjoyed the ending even more, however. Ensemble members lifted up the main character, and others surrounded her in celebration and allyship. She reached up and looked to the heavens, as if fully grabbing by the horns her destiny and what her soul needed.

Everything in this work spoke to “the joy…the beauty….the creativity” that Ailey saw in his friend, Joyce. Everything was harmonious and cohesive. It could present the grandest philosophical questions while also offering something simply entrancing to experience. The tradition of Ailey’s work and vision very much shined through to this night in December of 2021.

Reflections in D (1963) followed that work, a solo danced by Michael Jackson Jr. and another work of Ailey’s. The piece illustrates true thoughtfulness both in content and in its execution. Jackson Jr. wore light blue (costume recreated by Jon Taylor) aligning with the blues in the lighting (by Nicola Cernovitch) and backdrop. Blue is a color commonly evoking, and sometimes even eliciting, harmony and ease. At the same time, it often signifies contemplation, reflection and sadness.

Interestingly, given those elements, the movement held a sense of play: exploring manipulation of tempo, pausing and moving with hops and pauses, as well as seeking ingenuity of shape in space and filling that space expansively. Even so, Jackson Jr. also moved with a sense of weightedness and heaviness. There was incredible range and complexity – offering many layers to peel back and experience, ponder, and simply enjoy.

With Ailey’s movement vocabulary in conjunction with Jackson Jr.’s committed, multifaceted artistry, all of these things were not mutually exclusive or even contradictory. Jackson Jr., for his part, allowed all of these layers to speak for themselves rather than overdramatizing anything (which, with this work, seemed easy to fall into) – while also painting them in full and vivid ways.

I’ve heard that a sign of a sophisticated mind is the ability to calmly hold two seemingly contradictory thoughts at the same time. Perhaps that’s also true of art, in its own way; life is complex and confusing, and honest art like this work can unflinchingly reflect that.

As is traditional for Ailey, the program closed with Ailey’s opus Revelations (1960). It was as aesthetically stunning and uplifting as ever. Unlike any other, the work paints in modern dance the human will to overcome struggle and rise above to a higher purpose.

I saw a touch of a new ferocity and generosity in the ensemble’s performances – perhaps, given these past couple of years, the dancers consciously or unconsciously aware that they should give more than they have to give on that stage – because any week, any day, any minute it could all go away again. Despite all of that precarity, Ailey managed to keep tradition alive this holiday season with even just a portion of its season at City Center – in large part through the work and creative imagining of the seminal Alvin Ailey.

As we step forward from here, likely into a pretty changed world, we’ll necessarily adjust, innovate and recreate – yet let’s also not forget what tradition has to teach us. The wisdom of artists and other great minds of the past can ring through today into the future, if we can pause and listen keenly enough to receive it.