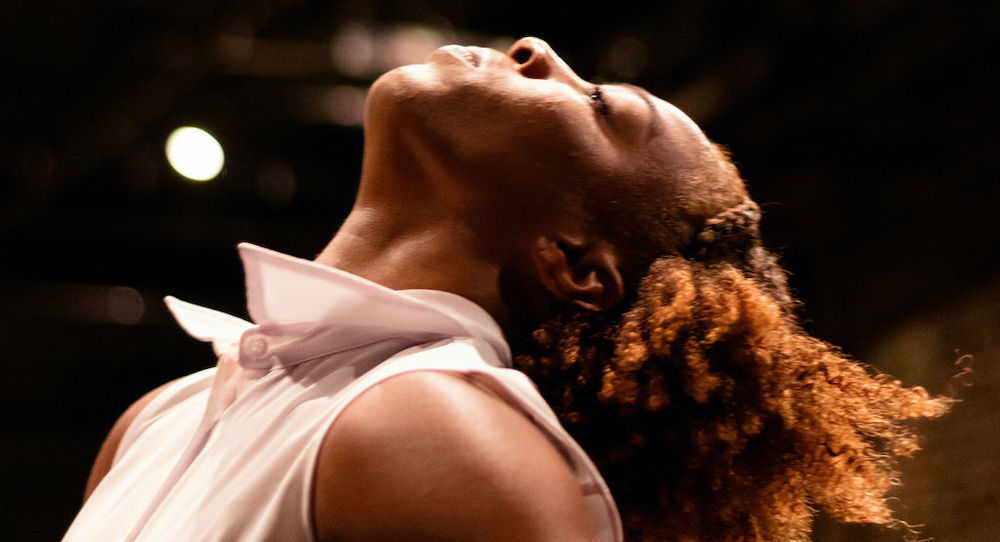 Tense muscles, heavy bones, churning and rumbling stomachs, heads swimming with pain and nausea: deprivation, psychosocial trauma and isolation manifest in our very body. Could the body be a medium to share stories of these phenomena, of the ways in which we have harmed one another, within human history? What could that mean for our understanding of history beyond those individual stories, and how we can do better by each other in the future?

If dance art can be an avenue for such means, a work like Rachel Linsky’s dance film Hidden stands as an Exhibit A of work with that ability. Linsky produced and directed the film, as well as choreographed it in collaboration with the dancers. It was filmed in residence at Chelsea Theater Works, and made possible by a grant from the Russell J. Efros Foundation. Hidden is part of Linsky’s longer work, Zachor.

The film was inspired by I Still See Her Haunting Eyes: The Holocaust and a Hidden Child Named Aaron, the memoir of Holocaust survivor Aaron Elster. In order to avoid being found by Nazi forces, Elster remained hidden in a small attic for two years. The focus on this story underscored that surviving a concentration camp wasn’t the only way in which the affected people experienced the atrocity.

Additionally, attending the premiere was Elster’s son Steven — who often speaks publicly on his father’s story, the Holocaust, and standing against the sort of hate that leads to genocide. Linsky noted that Stephen was part of the process from the very beginning. Having him attending the showing felt like a poignant, if indirect, connection to the person whose story the work illustrated.

Another connection to that story was in how, as she shared in a pre-show talk, Linsky had her ensemble of dancers read the memoir before the rehearsal process started, and early rehearsals included deep discussion on the text and Elster’s story. In a post-show discussion, a couple of the dancers attested to how all of that led to deeper, more truthful performances from them. They also discussed the importance of caring for themselves and each other when immersed in a work on such a heavy topic.

One dancer also described feeling a weight of responsibility in illustrating the survivor’s story. Others recounted an “emotional” warm-up for rehearsal to get in the right mental and emotional space for the emotional weight of the work. All of these sharings brought up questions around artists more generally and the weight of the work they carry, and what they have to do to protect their own minds, hearts, souls while creating and performing emotionally taxing work.

The film opened with shadows of moving people stretching across a large brick wall, which brought my mind to the secrecy of hiding away from danger (filming and editing by Olivia Moon Photography/Halfsasianlens). It also made me reflect on the faceless nature of gut-wrenching statistics: numbers of the dead killed in the Holocaust, other genocides, and wars; “one death is a tragedy, thousands dead is a statistic,” as the saying goes.

Learning the stories of real people who endured the worst of human nature, particularly through the visceral, sensory nature of art, can help us to understand that in those numbers are real people with loved ones, hopes, dreams, everyday struggles, and the like.

The following section had separate dancers moving alone within a small house space — triangular in shape like a roof, so likely an attic. There was very little within this space, just a small furnace and one or two other small pieces of furniture (scenic design by Mindy Phung). That emptiness enhanced the feelings of isolation and bare subsistence within Elster’s story.

The performers had varied ways of moving within the confinement of the attic space; some took up all of the available space around them (as confined as it was) while others moved more internally and took up less space. This variety of movement qualities demonstrated how we, as individuals with varied personal histories and temperaments, all react differently to tragedy.

In their own sections, at different times, dancers lay on their sides and turned their bodies in circles by running with their legs and keeping the head and shoulders as a stable point. This felt to me like an embodied sense of confinement, yet despite that the human will to rise above remaining strong — or at least remaining at a flicker, if dull at times never fully extinguished.

At other points, some performers painted a physical picture of total overwhelm at one’s present experience. For example, one dancer aggressively rubbed her skin and then stared at her hands as if questioning reality and looking for proof that it was all real (rather than a terrible nightmare).

Another dancer screamed silently, opening her mouth wide but no sound coming out. I thought about the need to be silent and not being able to stomp, scream, and moan to get out emotions coming with the horror of what was happening. In a similar way, later, dancers stepped and extended a leg high but then softened the landing with a hand, as if cautious to not be heard.

All in all, the movement was geometric and accented, yet also at times released and loose as if in total resignation. Gestures within the movement vocabulary were original and emotionally resonant. The dancers were strikingly committed, honest, and invested in their performances.

Later, the ensemble moved together in a larger space, more expansively than they could in the small attic space. Some of the movement vocabulary in the larger section, though more expansive and in formation with other dancers rather than the prior solos, echoed the geometric movement vocabulary seen in the beginning solo sections. I thought of how even when confinements, limitations, and traumas are removed, the ways in which we move through the world can still reflect how we had to move to survive when those things were still there.

The spacing and formations were clear and compelling. Circles made me think of cycles in history, of violence and healing. Can art and awareness-raising begin to break those cycles? One person attending the post-show Q&A noted that artists aren’t there to solve humanity’s problems, but they can “plant the seeds of compassion” and reveal for one another our shared humanity — the seeds of what can begin to break those cycles of hate and rebuilding to love.

In this section, as well as in the beginning sections, varied scores accompanied the dancers — all solemn and mysterious. Speech was part of the score as well, toward the end, with the speaker noting that this is not solely a thing of the past; there is violence against and scapegoating of marginalized populations in 2021, so we have to be conscious that something like the Holocaust could happen again. We must fight against hate in order to stem that tide.

It was revealed in the post-show talk that the speaker was Steven in conversation with the dancers. This felt like stories being passed down over generations, and the torch of not letting those stories be forgotten passed on as well.

Steven shared how the prompt for the discussion was “never again”, and how those words — minus individual and collective action — are wholly inadequate. He encouraged deeper learning, understanding, and action through art and beyond. The collaborators were also clear in a shared belief that the story at hand is a human story and not solely a Jewish story.

In both the specific and the general, art like Rachel Linsky’s Hidden can viscerally open a window into the stories of the past — full of both trauma and triumph — and therein offer the gift of greater understanding. Can that make the world a kinder, more connected place as the future progresses? It’s for sure worth a shot, and experiencing beautiful art along the way is for sure something to treasure.