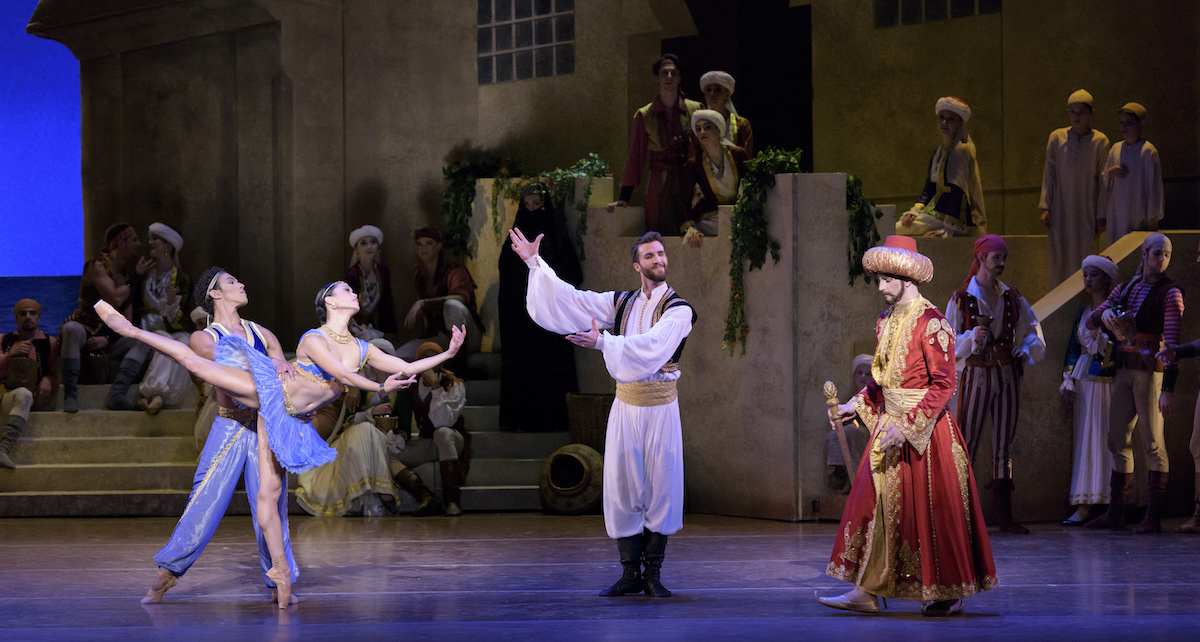 Ballet period pieces occasionally face accusations of historical inaccuracy, cultural reductionism and being more about spectacle than art. With all the issues that we have in our world today, do the same old love story and technical prowess really mean anything? What’s the point, one may justifiably ask. It’s spectacle, not art!

On the other hand, these works – when artfully done – can reconnect us with the past, offer uncomplicated sensory pleasure and preserve the history of the art form. Spectacle and art can be balanced. Through historical and cultural accuracy, as well as top-notch balletic craftsmanship, Boston Ballet’s staging of Ivan Liska’s Le Corsaire (at the Boston Opera House through November 6) effectively worked toward those goals. 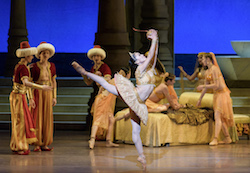 A balance of art and spectacle took the stage from the opening scene, before a step was danced. A transparent hole in a downstage psyche created a movie screen. On-screen was a ship and jagged black shadows – shadows and light underneath the water? Corsaire translates from French as “pirate”. Audience members could most likely put these pieces together to enter into the pirate story ahead. The psyche rose to display a seaside town, a ship off in the distance.

If any audience members didn’t yet understand their entering into a pirate story, the scarves as hats, puffy clothing and swords (elements without flash and glitz) should have given it away. With love at first sight between Conrad and Medora – danced by Patrick Yocum and Misa Kuranaga – the plot commenced! Yocum moved with an understated ease, building a character of wisdom and grace. Kuranaga offered a smooth and easy ballon. These two would be the heroes of the story, it seemed clear enough, but nothing about them screamed for attention. Their artistry drew eyes and respect toward them.

Other elements might have seemed outdated and controversial in 2016, such as roped harem dancing with bare midriffs. The music for their variation was surprisingly light and cheery as an accompaniment to the dancing of slaves. This was what it was at the time, however, so the performance values were only staying true to history.

Visual design elements also appeared culturally and historically truthful. Any extraneous glitz and glam (such as the main female characters’ tutus) was only in service of building the magic in visual spectacle that classical ballet can offer. We sometimes need to escape into that magic! It can be a tough balance for dancemakers to create, and Boston Ballet created one well.

Act II opened in a pirate’s grotto. The pirate variation used “cactus” arms (to flex muscles), flexed heels and palms, and quick yet grounded footwork. These elements effectively built the bravado of these very masculine characters. A bit later on, Medora played coy rather than immediately consummate her love with Conrad. She donned a baggy vest and danced the pirate variation.

This, she danced precisely and with more grounding than as Medora being fully herself. There was still a feminine lightness and grace to it, however. That’s a defensible approach, and the dance was pleasing to watch. It might be interesting, however, to see her apply more masculine weight and strength to this variation, and how it might affect the dynamic of this scene. This commendable artist is most likely capable of that alternate movement quality.

Act III lived in Said Pasha’s palace. Here came the “Pas des Odalisques”, including trios and solos. In all, but especially in solos, the three dancers offered something individually impressive and captivating. For one, extreme precision had her stopping complicated turns on a dime – no, a needle! A second sustained movement to have it never fade, yet always breathe and flow. A third had endless line and flawless épaulement to deliver the beauty of the body, that which classical ballet truly can offer.

The visual feast of “Le Jardin Anime” also took the stage in this act. Even with many shifts between variations and the dancers performing them, and the stage full of dancers in separate formations, it never looked messy. With sequencing of variations, sections with Boston Ballet School dancers were wisely sandwiched with those of the company and second company. The young dancers were professional, and commendably accomplished what they were asked to. The above is just to say that it was an intelligent decision to return to more technical, visually compelling dancing before too long.

Spoiler alert: it’s likely not a surprise that Medora and Conrad escaped forces conspiring against their love, so that they could finally live together unhindered and unthreatened. But this arguably predictable ending was conveyed artfully, such that it wasn’t trite. Medora, Conrad, and his fellow corsairs sailed off with their ship framed in the movie-screen like psyche – just as in story’s beginning.

That visual full-circling implied that the adventures would continue, for good and for ill. The classics have been seen over and over, originating long ago in a very different world. But they remain relevant for the art that they can deliver and how they can speak to timeless experiences, emotions, and values. It does, however, take artistry, discretion, and wisdom to bear those gifts out. With Le Corsaire, Boston Ballet demonstrated all of those invaluable assets.