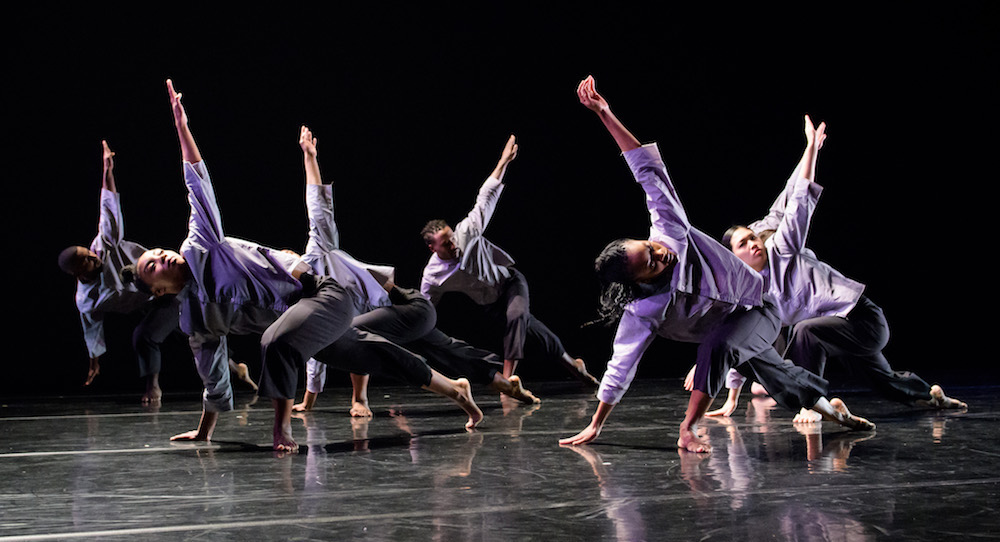 “Study the past if you would define the future.” ― Confucius

The entirety of Program B of Abraham.In.Motion’s (A.I.M) Saturday showcase, at The Joyce Theater in NYC, was an offering of a supplemental education, that isn’t willing provided by the educational ignominy that is the United States Department of Education. Art displays like this are necessary, when day after day there are attempts, to ignore, discredit, and bury truth and injustice. 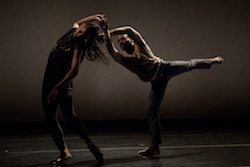 Kyle Abraham’s subtle, but purposeful, placement of each of the ballets presented allowed the viewer to approach the program with both love and cynicism. To start the evening, A.I.M presented two nostalgic works, “Strict Love” by Doug Varone (1994) and “Habits of Attraction: excerpt from The Habit of Attraction” by Bebe Miller (1987). These works sent the audience to a time, much more simple than the present. The second half of the program jolted viewers into some unobserved but simple truths about our nation. “Meditation : A Silent Prayer”, a world premiere, and “Drive” (2017) were both contemporary but revolutionary collaborations between Abraham and his dancers.

Varone’s use of radio broadcasts from the late ’60s-’70s, partnered with the simple but symbiotic chorographical concepts that pushed the piece forward, was an excellent opening chapter for the evening. The A.I.M dancers were all so masterful in their jam-packed interpretation of the nuance in the movement, while seamlessly telling his story. In context of the program, I found it hard to ignore how instrumental music of the era was in healing the turbulent times that surrounded the civil rights movement and warfare in the world. 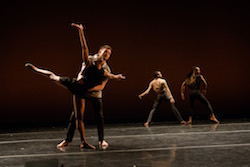 To follow, came Miller’s work. Much more primal in theme, “Habits of Attraction: excerpt from The Habit of Attraction” showcased a standout duet between Tamisha Guy and Matthew Baker. The daring, complementary movement quality of Baker brought light the offering of sedulity by Guy, really shedding light on the beauty of how we gravitate toward one another romantically. This ballet was a great way to end the first half of the program.

After intermission, Abraham sent viewers into an uncharted dialogue, not missing from Abraham’s arsenal (“Untitled America”), but from the American lexicon: Police Brutality/Gun Violence. “Meditation: A Silent Prayer” took place amid visual art, by artist Titus Kaphar, that showcased what seemed to be three people, but upon further inspection you could see that there were many faces drawn into the three focal points of the visual, each representing various victims of recent tragedies, later named during the work. The work had a keen focus on the women of the company which, when partnered with minimal, robust and luscious movements, added beauty and texture to the subject matter. 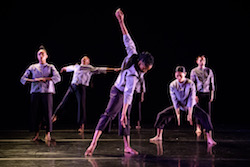 Lastly, “Drive” felt like a head-on collision with urban culture and social identity. Dancers appeared purposefully out of darkness into a suspended tapestry of red, white and blue focused light that really accented each segment of the work. The costuming by Karen Young and music, in part, by Mobb Deep really emphasized the presumed dogmatic tone of the Abraham’s work. The movement was agile and fun, which, for me, made the entire evening cohesive and palatable.

Ultimately, the night provided a tailored look into the power of art, societal difference, the discussions that come from their marriage, and why it’s necessary to produce art that creates space for an open dialogue that includes a multitude of perspectives. It was a therapeutic and refreshing program that I would watch again any day.