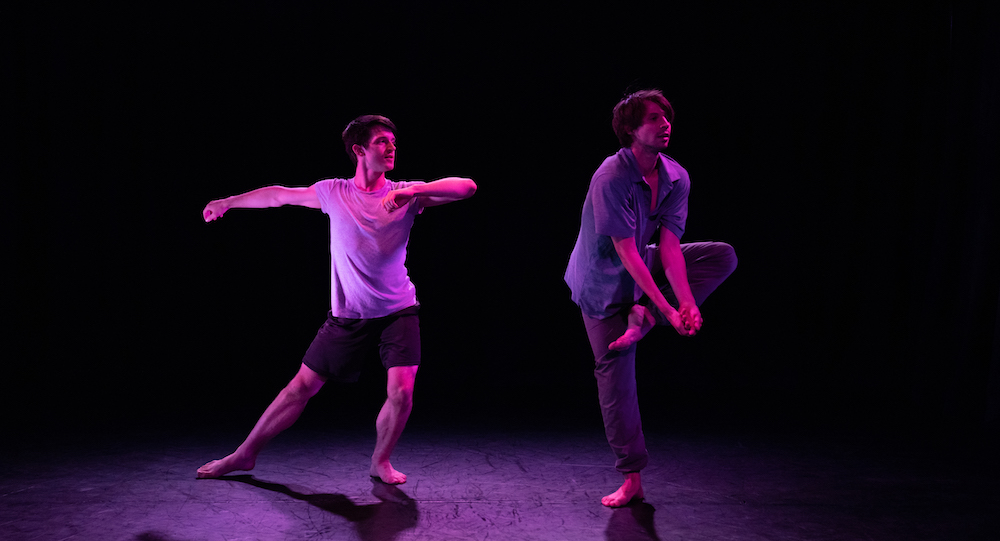 The rustle of bare feet across Marley, unadorned costumes, the energetic sensations of a body moving through release, activation and the laws of physics; postmodern dance has an unparalleled magic. The essence of that magic is something that artists sometime veer from — after all, we’re in a post-postmodern era when no style is wholly rejected, no creative approach considered off-limits.

Yet returning to that essence can remind us of the wonder that it does hold. At a time of global upheaval and re-evaluating accepted norms, coming back to that foundation can also be generative, informative, and maybe even comforting. A Few Premieres at Arts on Site surfaced this essence — as a result presenting something daring, at times challenging, and overall immensely satisfying.

One of the choreographers, Caitlin Javech, gave a quick pre-show talk — discussing some of the challenges that COVID has meant for bringing the work to life. This contextualized the program within all of those difficulties and uncertainties, and made me appreciate the work to come all the more.

Doron Perk’s Solos and Duet kicked off the program. It began with a dim red light slowly coming up on a soloist. Pensive and meandering piano accompanied the soloist’s slow, expansive movement — he took in the goodness of his body spreading through space, limbs and joints working their magic. For all of its pensiveness and meandering, the score had a joyful tone that supported that happy discovery.

The soloist’s movement was in a postmodern movement idiom, with a release technique way of moving from joints rather than muscles — moving sometimes minutely and sometimes through its whole range of motion. A memorable moment was an easy turn with a slight bend in his knees, with his arms outstretched a là Sound of Music. That wonder of what the body can do was fully enough — no theatrics required.

As he began and closed his section, he reached up with one arm while letting the other arm dangle, his torso angling toward the dangling arm. Apart from aesthetically appealing, this movement embodied the tension of opposites — the lifted and the grounded, the hopeful and the resigned, action and rest.

The following duet carried many of the same qualities, although with some more classically codified movement (jetés, sautés, assemblés) and the dynamics emerging from two autonomous individuals negotiating the space (versus just one exploring it alone). Unison movement spoke to common will, non-unison to divergence in that will, and lifts to supporting each other either way.

Next came a solo with an expressive operatic voice offering the score (not something commonly seen in contemporary dance, and it worked — brava to Perk on taking that risk!). The movement, in turn, reflected that lifted, refined elegance. Yet, it also contained moments of simply releasing bones to gravity’s pull and enjoying moments of wonderful rawness.

The way that the soloist released their head and negotiated his body parts through space was fascinating and utterly satisfying. At several points, they stood with feet just wider than the hips, arms raising slowly to the side and at shoulder-height — and embodiment of holding ground and commanding space. Soon enough, they shifted into much faster and more released movement — an exhibit A of the range of what the human body can accomplish within the art of dance. Again, the body’s wonder and drama was more than enough in that moment.

Javech’s Unravel took quite a tonal and stylistic turn from Perk’s piece, with percussion and natural sounds bringing a primal feel. The movement was also more shaped, precise, geometric. Yet there was a rootedness and sense of confident daring in the dancers’ performance quality that enhanced that primal feel — with shaking of limbs, quick jumps, and unconventional shapes. It was all fresh and enticing.

In the same way, the following solo brought with it an electronica score with a mechanistic feeling in the electronica (original composition by Max Jaffe). It enhanced something like that same quality in the movement — with repetitive and geometric movement vocabulary, bound movement quality, and rapid speed of the movement.

After a pause came Alexsa Durrans’ Lightforms. It offered a highly inventive concept,  the performers feeling to me like futuristic princesses — wide, floating dresses lit with stagelight, feeling both artificial and whole, cohesive. They moved to pulsing electronica music (from Amnesia Scanner and Yves Tumor), with a sense of commanding all that was around them and not needing to rush for anyone. They would take their time and be fully known.

Then the score became much gentler and more pensive. Accordingly, the dancers found more cohesion with each other, release, and a feeling of emotional honesty. They released into the ground (sometimes literally, executing movement on the ground itself), softened the angles in their shapes and found easy harmony with each other in space in ways that they hadn’t when they began moving. Both qualities and aesthetic conceits were pleasing in their own ways.

In another stylistic 180 degree turn, Javech danced a mysterious and foreboding solo — what once was, is not now. The score (“Unfold” by Skúli Sverrison and Gyða Valtýsdóttir) again met qualities in the movement to create an exciting world of its own on the stage. Javech suddenly shifted into very fast movement, in tension with the slowly meandering notes of the score — thrilling in its unexpected quality. As elsewhere in the show, movement vocabulary was full of ingenuity, being seemingly the fruits of productive exploration and risk-taking.

Up next was Fragrance of Blue, choreographed and performed by Nat Wilson — a work that read as both surrealistic and spiritual. Wilson wore finger contraptions accentuating each finger and its movement. While I couldn’t come up with any practical purpose for the costume piece, it was mysterious and aesthetically captivating enough to keep me interested. The score (Lingua Ignota’s “Fragrant is My Many Flower’d Crown”) felt like an inspirational hymn, looking to a higher power for guidance and strength. The soloist reflected that lofty and thoughtful feeling in his steady yet pliable and receptive movement quality.

The mystery and edginess returned with the next solo (and the last work in the program), the score mysterious and the movement unpredictable — Help Me Offend* The Stage (Offending the Audience, Peter Handke, 1966) choreographed and performed by Caitlin Adams. Breaking the fourth wall, Adams waved and gestured to the audience, making some audience members chuckle. She even sat next to the front row and looked on to the stage with them at one point — a clever way to break the fourth wall.

Slowly, methodically, and unwaveringly, she moved through more inventive movement vocabulary — limbs in tension, pulling in separate directions, while lunging deep, arms floating up yet punctuating at certain stopping points along the way. The shift to this solo was another abrupt one, stylistically speaking, which was sometimes enticing in this program — yet I did wonder if some less abrupt transitions (perhaps through alternate sequencing of pieces) might have felt smoother and more energetically natural.

In any case, at one point Adams removed a costume piece to reveal a different costume underneath — demarcating a second part of the solo. Through theatrical touches (a little sass here, a little attitude there), she got more laughs out of the audience members. It was interesting to see how one performer could draw laughs within a foreboding atmosphere — lighting dim, score anxious — through subtle, yet clear performance choices. That ended the show, and ending with a laugh and a smile is never a bad thing!

There’s a belief that this sort of work of going back to the essence of modern dance, exploring all stylistic corners — even the dark ones, is not something that’s palatable and marketable to general audiences. Maybe that belief had been proven true on certain occasions. Yet, let’s remember the power of intention and commitment; if we make something to the best of our abilities and fully commit to what that thing is, maybe, just maybe, if we build it they will come.

We can’t know unless we try. Contributors to A Few Premieres offered a model to follow for this approach of raw, real, back-to-basics contemporary dance. They say that authenticity is attractive and compelling. I know that was the case for this reviewer taking in this work!