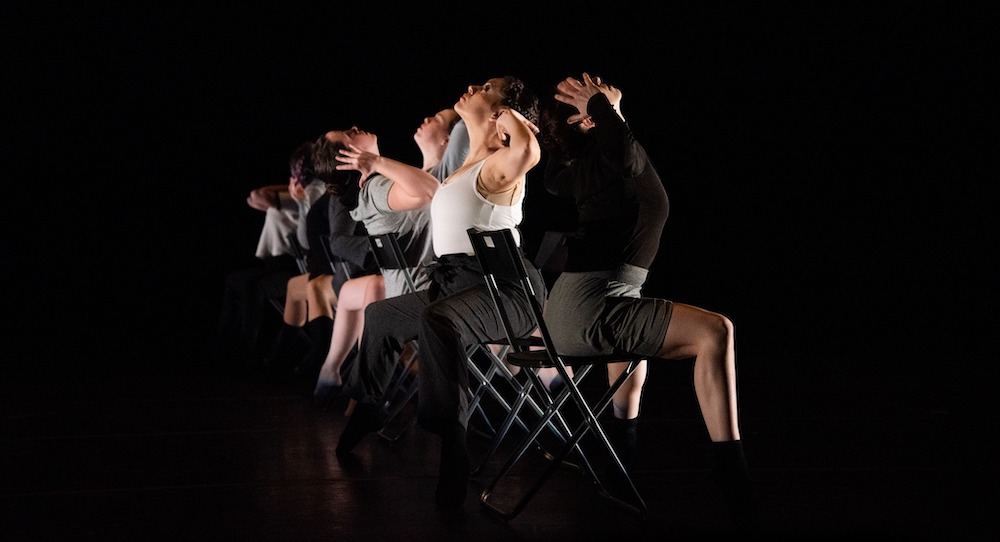 Concept — it can set dance art apart from movement, make it relevant, and make it truly “hit home” with audience members. Malden, MA-based Onstage Dance Company, a welcoming home for busy professionals who want to keep dancing past their studio and college dance days, always presents well-done and fun shows. Yet, in the company’s Season 18 Performance, the presence of particularly poignant and memorable concepts stuck out to me. It reminded me just how powerful an inventive or meaningful concept, moved out with dedication and care, can truly be.

The very first piece, Michelle Block’s Upside Down, began this trend of sophisticated, enjoyable concepts. Dancers began in silhouette, lit from behind, in two lines. Lights came up to reveal much more color, green and purple dresses with a lighting color palette to match.

Block called upon having these two color groups in aesthetically intriguing ways, such as partnering of one dancer wearing one color and another dancer wearing the other, interweaving and alternating dancers wearing the two colors, and splitting them on sides of the stage. This was an unnamed, yet clearly visible concept within the work. Another was actually named, in the title; dancers physically inverted themselves and each other in partnering. Both of those concepts compellingly played off duality — up or down, one color or another.

While these binaries were clear, what also piqued my interest were the spaces and times in which we saw shades of gray between the two ends of the spectrum — halfway to upside-down, body parallel with the floor, or when the colors were mixed within a group. The dancers executed it all with commitment and technical command. Visually and mentally, there was so much to chew on. Short of that, it was just enjoyable to take in.

Teresa Fardella’s Lost at Sea came next. It brought a different feel — darker, more mysterious, more reflective. A piano score with enticing vocals began instilling this atmosphere, and off-white dresses — offering the feeling of a blank state — built it further. Lighting was low but became brighter as the piece progressed. Similarly, movement sped up a bit and became lighter in energy as the piece went on. Small jumps and larger leaps added a feeling of flight to this increase in energy.

Another development was dancers entering in black dresses — bringing a contrast of two separate groups, as Block’s piece had. In this piece, this choice served to reinforce a feeling of searching, searching for an opposite, for something outside of the known. Adding to this was frequent shifting into other levels in space and places in space (the stage space that is). From the way dancers related — circling, ducking, coming toward but then assuredly away — I thought of this “lost at sea” as a separation from true human connection, lost in the turbulent sea of life.

It would take clarity and intent in the movement for the movement to spur such an interpretation, and the performers delivered. A balletic/lyrical style added a grace and formalism that softened the edge of all of this. To end, the dancers paused and seemed to, for the first time, truly see each other. Were they found? That would be for audience members to decide for themselves. That is a wonderful thing for which art can hold space.

Closing out the act was Jennifer Kuhnberg’s Angel by the Wings. Every part of it furthered the concept of guiding angels in our lives. To begin, the stage was backlit to create a silhouette effect. Clotheslines draped with white clothes created the imagery of angel wings, and dancers had formed a tableau just beneath. Lights came up to reveal the dancers fully lit, in costumes that were gracefully flowing and white. Lighting created ethereal-feeling shadows. As the piece progressed, a feeling of harmony became clear — even through various formations and ways of dancers relating with each other (in cannon, in unison, in their own movement).

Partnering, in a softened and released contemporary quality, brought a sense of support. Dancers rolled over the hip of a partner to land in deep, grounded lunges or to shift their momentum into a turn. There was a good deal of activity happening onstage, but it was all highly visually organized — to be accessible, compelling, and enjoyable. These qualities continued to the end — dancers creating a tableau of varied levels and shapes, a wing shape lit behind them. There was certainly something otherworldly and majestic about it all, something that made me feel more soothed and peaceful just from experiencing it.

Willow Gertz’s The Final Rose opened the second act. Curvilinear imagery connected back to flowers, and a red/pink color scheme made that all the clearer. Strong movement with a clear grace emulated the beauty of a rose that nevertheless has protective thorns; elements such as a motif of a circling arm brought the softness, and sharply geometric formations brought the strength. Dancers connected in a chain shape, snaking across the stage, but then moved into a diagonal. They held hands at their back, walking in a bound quality, until they moved in a melting quality. Dancers brought these qualities across clearly and compellingly. This contrast of strength and softness, emblematic of a rose — in movement vocabulary, movement quality, and formations — brought to life an intriguing concept, and a simply enjoyable nugget of dance art.

Later on in the Act came another work from Kuhnberg, Game of Survival. An atmosphere of the wild, and all of the dangerous edginess therein, was clear and intriguing from the very start of the piece. Dancers formed lines and then danced in them, large sticks adding a grounding element as well an auditory anchor (they banged the props on the stage in unison, calling attention and contributing to atmosphere). Wildness was clear in the green and yellow lighting, jagged cuts of costumes in similar colors, and rugged movement.

The lyrics “the game of survival” rang through the theater, and it all came together for me. Different groups of them moved in ways making me question who was hunter and who was prey — circling, lunging, dipping above and below. Kuhnberg’s movement vocabulary became as daring and tenacious as the wild she was portraying; dancers slid on one hip, rolled over other dancers’ shoulders, and leapt over other dancers lying on the stage.

The ending captured me most of all, however; dancers banged the sticks in perfect unison and the lights went out — an enticing call to wonder what might come next, beyond the confines of the piece in the imaginary world she had built, and simply a true draw to the senses. Cleverly building a concept through a work of dance art can have such an effect, and Onstage Dance Company commendably delivered there in its Season 18 Performance.