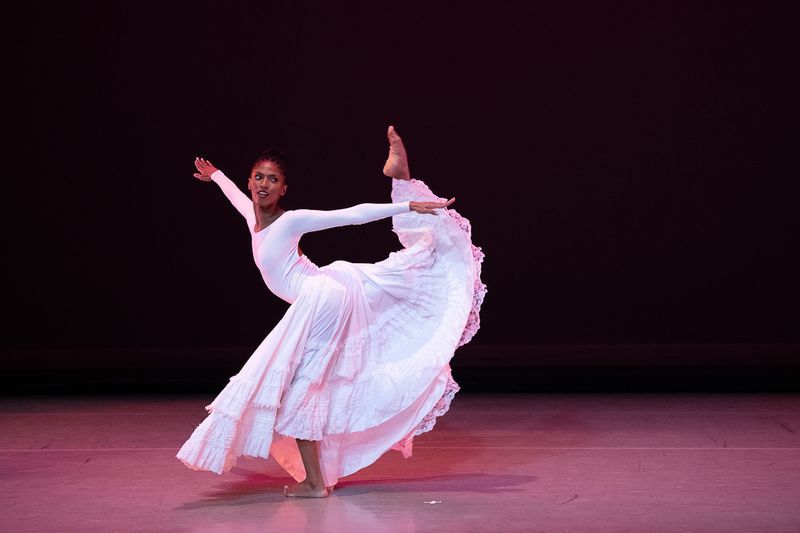 “There will be much to celebrate this December as Alvin Ailey American Dance Theater returns to the stage at our New York City Center ‘home’, reconnecting to audiences during live performances with artistry that renews our spirit of courage, hope and joy,” Battle said. “I am deeply humbled to have led this seminal Company for a decade, joined by incomparable dancers and choreographers on a journey of discovery that extends from the powerful works of our founder to the important voices of today – an ongoing dance dialogue that shines a light on the resilience of the human spirit.”

The season launches on December 1, at 7pm, with a #ReunitedWeDance Opening Night Gala Benefit and an exciting one-night-only homecoming performance and a party at the Ziegfeld Ballroom. Proceeds support the creation of new works and Ailey’s extensive educational and training programs for young people. The entire Company will appear together on the New York City Center stage to welcome back audiences in a piece d ‘occasion. Clifton Brown and talented students from The Ailey School will perform ‘Bird’ Lives!, an excerpt from Alvin Ailey’s dance tribute to jazz legend Charlie “Bird” Parker. The special program will feature Battle’s irresistible Ella and forward-looking Love Stories finale and closes with Alvin Ailey’s uplifting Revelations, reuniting dancers and audiences to share in a live presentation of Ailey’s always-inspiring masterpiece.

On December 2, the curtain goes up on the return of hip hop innovator Rennie Harris’ acclaimed Lazarus, a powerful ensemble work inspired by the life and legacy of Ailey. The creation of Ailey’s first two-act ballet is featured in the must-see AILEY documentary now playing nationwide. Director Jamila Wignot’s resonant biography is told through Ailey’s own words, along with interviews of those close to him, evocative archival footage and historic performances.

World premieres translated from dance films take center stage on December 3, with Battle’s For Four, set to Wynton Marsalis’ delicious jazz score written in 4/4 time, capturing the pent-up energy of a world cooped up during the pandemic. Ailey Resident Choreographer Jamar Roberts’ Holding Space examines the ways in which we are taking care. It asks: in what ways can we collectively accommodate one another to better traverse this new and unprecedented terrain? Both pieces were created on video during the pandemic and will be seen for the first time on-stage during in-person season performances.

50 Years of Cry on December 4, celebrates Ailey’s beloved classic dedicated to “all Black women everywhere – especially our mothers.” The 16-minute tour-de-force solo, created on his stunning muse, Judith Jamison, was an instant sensation when it debuted on May 4, 1971, at New York City Center and went on to become an enduring work of American art. Jamison has since taught the treasured role to subsequent generations of Ailey women, such as Jacqueline Green, who is seen performing the iconic work in Really Love, a romantic feature film available on Netflix on August 25 , about a rising Black painter who tries to break into a competitive art worldset against the backdrop of a gentrifying Washington, DC.

A Battle 10th Anniversary program is unveiled on December 7, marking a decade of Battle’s visionary leadership that has moved the Company forward in exciting ways into a seventh decade. The program features a new production of Battle’s sensuous, swirling duet Unfold, evoking the tenderness and ecstasy in Gustave Charpentier’s aria “Depuis Le Jour” sung by the incomparable Leontyne Price. The evening also includes Mass, Ella, In/Side, For Four and Love Stories finale.

A special program on December 9, celebrates Ailey Resident Choreographer Jamar Roberts in a farewell performance for someone who left an indelible mark as a dancer over two decades and is now making compelling dances that engage artfully with contemporary issues such as gun violence and — most recently — the devastating effect the pandemic and police misconduct have had on Black bodies and Black lives. Before leaping to the forefront of creating dance on film during the pandemic, since 2002 his dancing thrilled Ailey audiences and received rave reviews. Roberts was awarded an Outstanding Performer 2016 Bessie Award for Sustained Achievement “for impeccably representing the traditional values of classic modern dance while forging new paths with his sublime artistry, technical precision, and passionate presence with Alvin Ailey American Dance Theater.” The program will feature his Holding Space and special performances by Roberts in Alvin Ailey’s Revelations and other works to be announced.

Ailey & Ellington on December 10, spotlights new productions of Pas de Duke and The River – two cherished gems from the over a dozen ballets Ailey created that celebrate the musical genius of the eminent American composer Duke Ellington that have become cherished Ailey classics. Pas de Duke was Ailey’s modern dance translation of a classical pas de deux honoring two of the most renowned dancers in the world, Judith Jamison and Mikhail Baryshnikov. Originally choreographed in 1970 for American Ballet Theatre and first performed by Alvin Ailey American Dance Theater in 1980, The Rivercombines classical ballet, modern dance and jazz in sections suggesting tumbling rapids and slow currents on a voyage to the great sea, mirroring the journey of human existence.

All Ailey is comprised entirely of works by Ailey: Memoria, a touching and powerful tribute to his mentor, Joyce Trisler; a new production of Reflections in D that highlights the grace of the male dancers in a stunning, masterful expression of Duke Ellington’s composition; and Revelations, acclaimed as a must-see for all.

Ailey fans will cheer returning favorites when the stage springs to life with Aszure Barton’s dazzling BUSK, an episodic look at the nature of performance and the vulnerabilities that artists face in revealing themselves on stage; and Jawole Willa Jo Zollar‘s Shelter, a gripping portrait of homelessness and displacement.

Each performance (except Lazarus and Battle 10th Anniversary program) culminates with Ailey’s American masterpiece Revelations. Since its creation in 1960, Revelations has been seen by more audiences around the world than any other modern work, inspiring generations through its powerful storytelling and soul-stirring spirituals. Springing from Ailey’s childhood memories of growing up in the south and attending services at Mount Olive Baptist Church in Texas, Revelationspays homage to the rich African-American cultural heritage and explores the emotional spectrum of the human condition.

With the COVID-19 pandemic, the Ailey organization had to pivot quickly and find new ways to connect with audiences and students to continue manifesting Ailey’s belief that “dance came from the people and that it should always be delivered back to the people.” The organization has been reaching out to inspire all people with Ailey All Access, a series of online offerings that has brought dance to nearly 15 million people in 121 countries, including free streaming of Alvin Ailey American Dance Theater repertory, original short films created by the Ailey dancers, Ailey Extension dance and fitness classes for all levels, and more. In advance of the much-anticipated return to the stage for live performances, Ailey All Access programming will return in the fall, with the shedule to be announced soon.

Tickets starting at $29 are on sale October 12, at the New York City Center box office, through CityTix® at (212) 581-1212, or at www.alvinailey.org or www.nycitycenter.org. Discount tickets are available for Ailey Super Fans who purchase tickets for more than one performance, for students with an appropriate ID, and for groups of 10 or more (discounts do not apply to $29 tickets). For group sales, call 212-405-9082 or email groupsales@alvinailey.org.