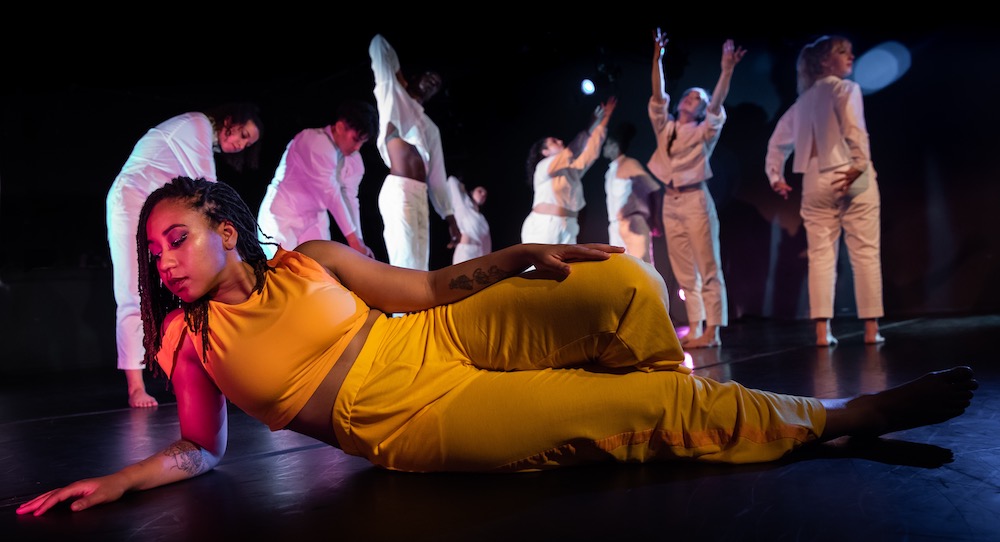 Up or down, black or white, left or right, now or then — we understand much of the world through opposites. What if we could see the world in more complex ways, to accept that multiple things can be true at once — to see the space between binaries? One thing I love about art (among many things) is its courage, and inherent ability, to explore the whole spectrum of meaning and possibility.

Boston-based VLA Dance’s In the Space Between, the company’s first live and in-person show since March 2020, challenged audience members to find the beauty in the absence of concrete answers or polarities. Abstract and layered, aesthetically striking and thought-provoking, it opened the space to find meaning in the expansive and boundless in-between. VLA Dance Founding Director Victoria Awkward directed and choreographed the work. Iyun Ashani Harrison served as dramaturg.

Lights slowly came up on a group of dancers to begin the work. They moved fluidly and full of ease — facing and moving in different directions, at various levels in space. With a score of water flowing (composition by Aaron Brown), combined with harmonious electronica sounds, I thought of the dancers almost as stones in a creek, water flowing over them and impacting the direction and quality of its flow. With them wearing white (costumes by Mitzi Eppley), I also thought about purity and water washing clean.

The movement came off as deeply embodied use of intelligent improvisational scripts; the performers moved in non-unison movement vocabulary in ways that felt fully attuned to who they uniquely are as movers. Notably and memorably, they all paused at one point. I wasn’t sure how this might fit into the water theme at hand, yet it was effective as choreography.

Then came what felt like a significant tonal shift, with a spoken word score coming in (performed by Capella Auriga) and a more accented movement quality emerging in the movement. The speaker of the spoken word described worry, and being “stuck in the now” while losing touch with the past. They seemed to be in a state of deep self-reflection and self-inquiry.

Aligning with that, the dancers moved in an almost robotic and mechanized quality, the beautiful individuality of their movement that we had seen somewhat flattened. Sometimes how we move through the world being diminished leads us to question and explore who we really are.

Further translating that sense of deep reflection, lighting in blues and purples (by Elmer Martinez) reminisced the light at midnight; nighttime offers the quiet and the mystery in the air that can lead us to a reflective mood. These colors filled the white costumes with striking hues, making me think of canvases and black pages open for exploration.

Awkward danced a somewhat short but memorable solo, wearing yellow in contrast to all other dancers in white. As she danced, they came back on stage and stood, looking out to the audience — a powerful use of stillness in opposition to movement. Something even more intriguing, aesthetically pleasing, and full of creative possibility followed that section — sheets, hanging from the ceiling from two points so that they formed a loop, moved out on overhead wires (set design by Arthur Chang and Christian Borger of NADAAA).

Dancers moved with, on and around the sheet loops in a spirit of courageous multiplicity: pulling and stretching them, entwining their limbs and other body parts. At points, they had the sheets stand as barriers between them and other performers as all moved, being a literal space in between. Another notable section had the dancers stepping forward from the sheets and performing the same phrase in pairs. In a way, this felt like a tenacious stepping forward in the fullness of their individuality; within the same phrase the nuances of their own movement signatures were clear.

A later section had the dancers again executing the same movement vocabulary, but facing opposite diagonals (both also facing the audience). Parallel opposition came to my mind — opposition yet similarity at the same time. Similarity and difference can co-exist, as can so many other seemingly opposing ideas.

Through these various structural iterations, the in between those opposing ideas was on display. Adding more to that mix, in a moment of freedom and joy, they all together danced with groove: hips swaying with jazzy inflections in the score, little kicks and jumps making it feel like a party. Awkward danced another solo, uniquely marrying the smooth and easy and the accented and strong — finding her own in between.

In a sort of structural callback, and an effective one at that, the spoken word track came again. “My memory is somewhere in the space between gone and recreating the new,” the speaker proclaimed. At hearing this line, I pondered the creative inspiration, and subsequently the creative process, for this piece — what place this line had and what had bloomed from there. “I love myself” sang the spoken word speaker, and the sheets moved back on their wire tracks.

The whole ensemble then danced together dynamically, coming forward together in a line across the stage space before the lights faded down. It was just gradual and smooth enough to demonstrate continuance without the abruptness that often comes with that sort of movement lingering on, lights cutting out ending.

With love, for one’s self and far beyond, we can find the space between extremes that’s right for us. Thank you to VLA Dance for illustrating, with beautiful abstraction and thoughtful creative construction, a journey of finding one’s place in the between. We each have our own such journey, and it’s a process of exploration as well as continuous negotiation. Art like VLA Dance’s In the Space Between can illuminate the way.