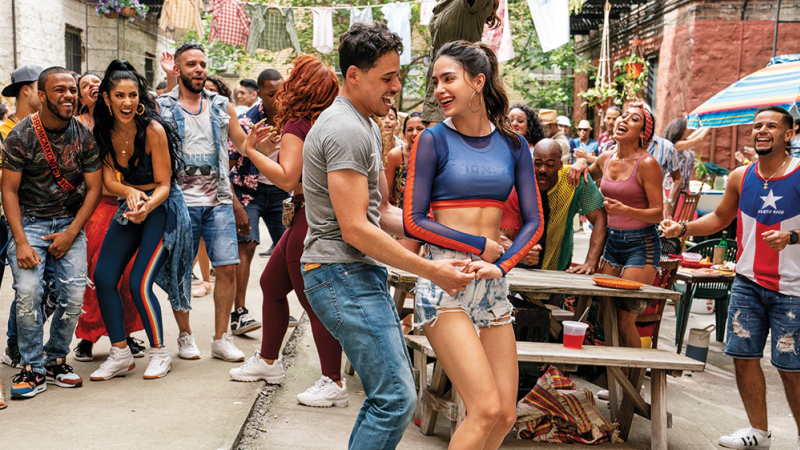 After multiple delayed releases because of a long, hard global pandemic, it’s finally here — the film adaptation of Lin-Manuel Miranda’s Broadway hit In The Heights is in theaters and on HBO Max! With direction from John Chu, it’s a kaleidoscope of popping color, music, movement and the shining visions within our dreams. Miranda has called the film a “love letter to the neighborhood I love,” the neighborhood where he grew up.

Christopher Scott’s dynamic choreography pulls from diverse cultural and artistic inspirations, enlivening the plot’s snapshots of everyday struggles and triumphs in this upper Manhattan neighborhood. The dance work in this film truly brings to full vibrancy that love letter to the Heights, deepening meaning and creating a feast for the senses. Here are five In The Heights film dance scenes that we at Dance Informa found unforgettable. Which dance scenes are your favorite? Let us know!

#1. The first big dance scene: Welcome to the Heights!

This vivacious scene introduces viewers to the raw energy of this barrio (neighborhood). In the opening scene right before that, Usnavi (Anthony Ramos) tells his children that this is a place where “the streets are filled with music.” Latin beats, a Latin sense of groove and Latin movement vocabulary is fully reflected in this scene’s music and dance; trumpets blare as dance pairs cha-cha-ing fill the sidewalks and the streets.

Camera angles from directly overhead underscore a sense of urban elevation, tall buildings all around and towering skyscrapers less than a half-mile away. Apart from technical dance vocabulary, the montages in this scene reflect the buzzing sense of continuous movement in this place — people working hard, coming together in community, creating, sharing and loving.

As Usnavi looks out a window from inside his bodega, the glass on the outside of the windows reflects the silhouettes of dancers crisply executing Latin dances. This striking moment embodies what Usnavi sings about as they dance — of life passing him by while others reach their sueñitos (little dreams); will he be a bodega owner for the rest of his life or will he make the change toward his dream of returning to the Dominican Republic, his ancestral homeland where he spent the “best years of his life”? Audience members will find out!

While the choreography in In the Heights calls upon many classically codified dance forms, it also exhibits the post-post modern sensibilities of free exploration and widening the lens on what well-constructed dance art can be. Exhibit A: the very fun dance scene in the pool! On a scorching hot summer day, Washington Heights neighbors shut down their businesses to head to the pool and cool off.

Circular shapes and fluid qualities in the movement reflect the sense of ease and relief that one can feel by taking a swim on a hot day. Circular “floaties” form bigger circles, and movers in the water expand and contract in human circles. Some movers dance up the lockers by the side of the pool with break dancing vocabulary, while others do ballet port de bras on the steps leading into the water — underscoring that “anything goes” feel.

A certain plot turn adds another intriguing layer here; there’s now a possibility for financial relief for anyone in the community. They discuss what they’d do if that happened to them, creating delightful banter moments as movement swirls around. In clear line formations and with clean lines in their upper body, they slap the water and create splashes as if to say, “Universe, over here, pick me!” The water brings relief from the heat as they each dream of financial relief, hoping for the fluid ease of water in their lives.

On a hot night, Usnavi helps his Abuela (the matriarch of the neighborhood — Olga Merediz) settle into bed. She drifts off to sleep and into a vivid dream. She enters a subway car, the platform and the car bathed in an otherworldly light. Dancers that feel like supernatural beings in human form surround her — sometimes feeling like protection and at other times feeling threatening, depending on the tone of the memory on which Abuela is reflecting. She sings of her experience coming to the U.S. and the (sometimes bumpy) road to making a life here.

The movement is largely in a modern dance idiom — which supports the abstract, mysterious feel at hand but also the sturdy, geometric structure of the space in which they’re dancing. White dresses with wide, ruffled skirts reminisce the costume for Alvin Ailey’s solo Cry (1971).

Some hip hop dance vocabulary is also peppered in, reflecting NYC’s boldly countercultural subway dancing tradition. Toward the end of the scene, Abuela must make a choice. As these otherworldly beings stand in long lines behind her through the long hall of a subway station, she ultimately does — propelling the film’s plot forward.

It’s another scorching hot day in the Heights, and, to top it off, there’s been a blackout, so there’s no air conditioning. Neighbors are gathered in an alley, fanning themselves and feeling down from a few losses that the community has recently experienced. One senorita urges everyone to get up and dance, to rejoice no matter the heat or their grief.

They’ll have a carnaval! Gradually, everyone on the alley is on their feet and having a great time dancing to the lively music. They gather into separate nationality groups — Mexican, Cuban, Dominican, Puerto Rican — and exhibit their national pride through flags, shouts, singing and dancing.

They move vibrantly and with organic connection to their body’s wants and needs. Certain characters draw closer through dancing, as dancing can make happen. As they wrap up the music and movement, the lights come back on. In a spiritual sense, one might enjoy imagining that shifting their frame of mind and dancing joyfully together led to an end of them having no power.

#5. Nina and Benny dancing up the walls

Nina (Leslie Grace) is preparing for a big change, and Benny (Corey Hawkins) helps her. They walk out to the fire escape and begin to sing. Benny bends and reaches daringly over the fire escape rails, and soon Nina does the same with him. Eventually, they’re defying gravity by dancing horizontally up the walls of Nina’s apartment building — another demonstration of this film’s embrace of all kinds of movement as dance.

A young boy inside one of the apartments drops his jaw at seeing them move horizontally, which, apart from offering a chuckle moment, brings an element of realism and believability. There’s undeniably magic at hand, though. Nina and Benny sing of being a light for each other when all other lights go out.

In defying gravity, they reinforce that together, they can overcome anything if they stand together. Like the film overall affirms, this scene illustrates that love, community and following your heart will lead us to the best of life. Whether or not that’s the sueñito we had in mind, it’s a little dream of its own.