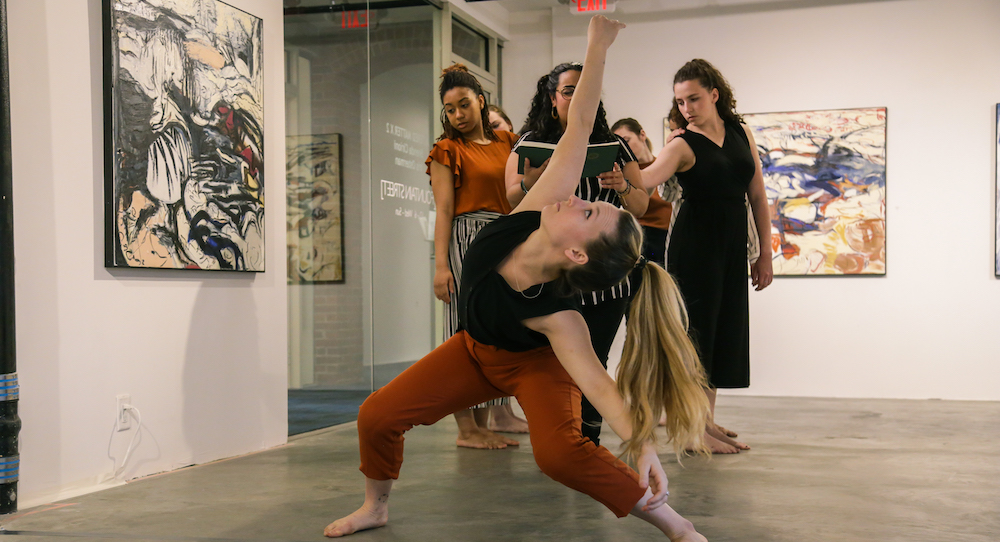 A key aspect of dance art is that it takes place in a space, which is part of a context, often becoming part of meaning. Purposeful or not by dancemakers, more or less effectively crafted by dancemakers, audience members draw associations from what they see with their own lives — to memories, to knowledge, to raw emotion. I had all of these complex, broad notions in my mind after viewing VLA Dance’s Sand, along with — in contrast — the poignant specificity within the work. 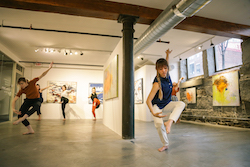 It was performed in Boston’s Fountain Street Gallery, offering an unconventional and intriguing backdrop for the movement, sound and live poetry reading. This quality, along with the inventiveness and clarity of the movement, were quite striking to me considering that the company is but a few months old (VLA Dance was formed in January 2019). It “aims to empower artists and audience members alike through interdisciplinary art and physically demanding dance,” (program). VLA Dance is the brainchild of Artistic Director Victoria Lynn Awkward (hence, VLA), who also choreographed the work in collaboration with the dancers.

Dancers began at the back of the gallery, opposite to the audience, in a clump. A poet, Tatiana Isabel, read her work aloud. The text described water and sand, and how their qualities have resonance in our life. There was a sense of presence in one’s own moment in time, while remembering the ancestors who came before. The dancers, in unison, began to glide to one side and then look up and over — gaze clear and intentional, as if watching a beautiful bird fly overhead. All around were paintings evoking water, or — less overt yet still connected to the theme — abstractions with its density and quality of flow.

Jessy Zizzo broke from the group with a solo of movement faster and more accented than what the rest of the group continued dancing. Even as she moved with speed and sharpness, there was somehow an elastic, sinewy quality that kept me transfixed. The music shifted, from LSP’s “Teebs” to their “While You Doooo”, and dancers spread out across the space. Their movement reminded me of rippling waves and the tide moving in and out, their spines rippling and movement rhythmic.

The score supported this feeling with its own wave-like feel, in rhythm and tone. Costumes of dress-casual summer-wear also made me think of summer at the beach. Each dancer wore something different, highlighting their individuality. Also striking at certain points was the way Awkward structured the movers in space. For instance, two dancers moving more quickly and sharply than a single slow, melty mover on the other side of the space (it separated by a central wall) created clear contrast — allowing the qualities in each to resonate more.

Solos, duets and trios broke forth from unison sections — sometimes happening concurrent with those sections, sometimes alone. A next most memorable one of these was a solo from Mitzi Eppley. She moved with a mysteriousness, built from an assemblage of many little nuances, making it hard to look away. There was just simply so much to discover.

Into more unison sections, phrasework took on new flavors and new daring. Elbows led into a falling towards the floor, then rising with arms lengthened to the side and feet in ballet fifth position. Following that was an inventive partnering of circling a dancer in the air, repeated twice. The dancers somehow had the physics worked out such that lifting and moving one-hundred pounds or so in the air seemed impossibly effortless — just as can feel moving one’s body through water when swimming. Just like swimming, and the movements of bodies of water, the movement as a whole had an even circularity that was both mentally stimulating and visually pleasing. 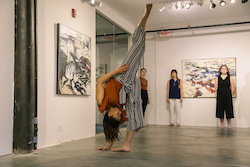 Awkward herself danced a solo toward the end of the first act. Gaze initiated exploration of her spine’s possibilities. On a few occasions, she executed a virtuosic “wow” moment — falling all the way on to her back from standing, heels raised and never touching while legs smoothly curved into a “z” sit shape at some point in the air. Leading into the intermission, Michayla Kelly drew down her solo and then gestured audience members to come look at the paintings in the gallery. This was a smooth way to end out the act, as well as to encourage audience members to enjoy the art that the space had to offer.

The second act was similarly an assemblage of solos, duets and trios out of and into unison sections. Certain movement motifs became more frequent and clearer — for instance, a walking on the hands from the fingers through the palm to the wrist. Partnering, such as a moment of pulling backwards and assisting forwards, further developed the idea of support and unity — yet that which co-existed within individuality.

Isabel returned to read her poetry toward the latter half of the second act, and new, inventive movement kept coming right about up until the end.

One particularly memorable phrase was a tendu sweeping back quickly and sharply into an arabesque, which melted into a half-turn and finished in a deep, wide plié. It all came full circle toward the end, dancers gliding one foot to the side then looking up and over as Isabel read — words repeating but also building upon its thematic power. Her text spoke of rooting in oneself, the earth and those who came before even while finding an easy flow like the tide. To end, they shifted further away from one another in space to find some individual movement, then all bowed together.

All in all, Sand was inventive, thought-provoking and visually stellar — and impressive as the fruits of such a young company. It underscored how putting a work in specific context and place is to be done with care, but when it succeeds it can be truly magical.